I absolutely love potatoes and I’m not just talking about the taste, texture and smell. I have deep-rooted associations between potatoes and happy thoughts from my childhood. Like many eastern European households, my parents always had them on hand. For the most part, my mother would boil or roast them. If my dad was cooking, he would pan fry them in pats of butter and enough garlic to seriously injure a vampire. It was a very welcome treat, let me tell you! The entire house would be perfumed by the most comforting aroma! To this day, I can’t help but think happy thoughts when eating a potato. 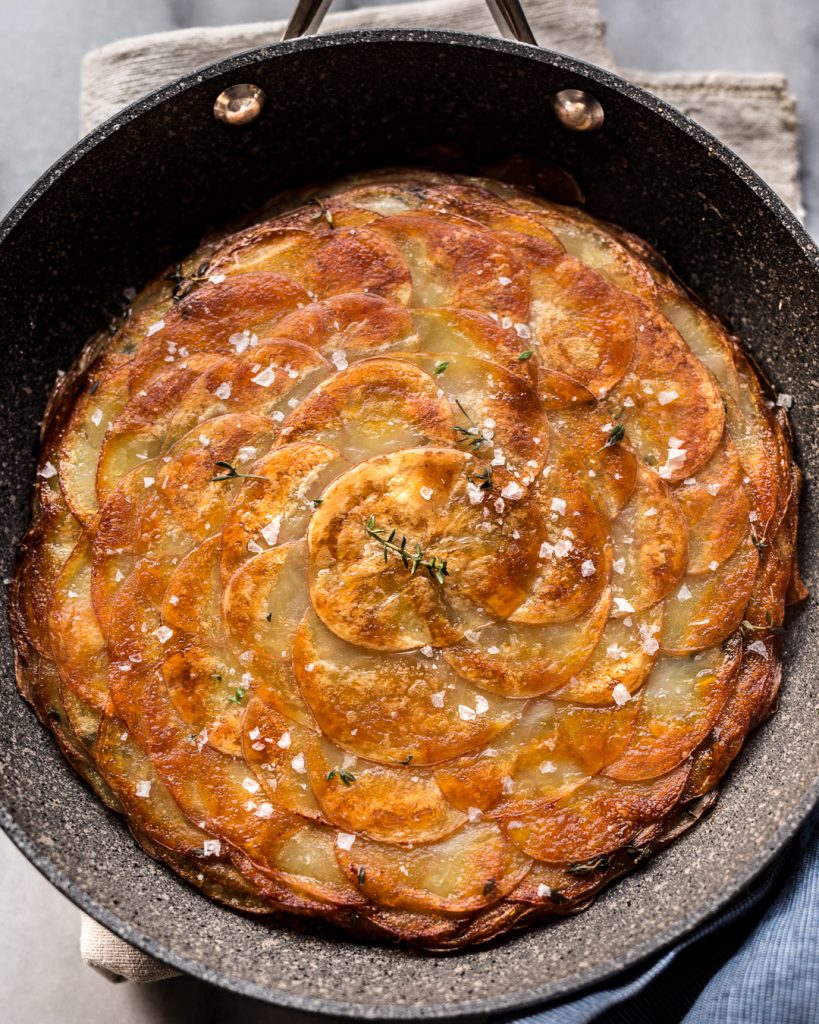 Since starting my health journey a few years back, however, I’ve come to realize that when I eat potatoes I tend to go overboard. I’ll go well past the point of feeling full just to get another taste, and another, and another. Before I know it, what should easily be enough potatoes for two or three meals is gone in one sitting! It was only through reintroduction protocols that I also noticed that I tend to feel bloated and lethargic after eating potatoes and it seems to induce further cravings. Potatoes are thus, for me at least, a ‘Gateway Food’. The deeper issue here is that I used to regularly eat potatoes, among other foods, to cope with various emotions and I would be lying if I didn’t say that I am often still tempted to revert to old habits.

Is this a problem? Should I be worried? Should I never eat them again?

I don’t think so. I’ve identified a culprit, something that doesn’t serve me well, and that awareness helps me avoid them and have a better control over myself when I do occasionally tuck in! It’s taken me a long time to get to this point and although it is very cliché, I am living proof that the cycle can be broken with hard work. There are millions of others who share similar stories so if you find yourself relating to any of the above, don’t fret.

The biggest thing holding you back from change is usually yourself. After all, old habits die hard.

So what am I doing posting a recipe for a Potato Galette? 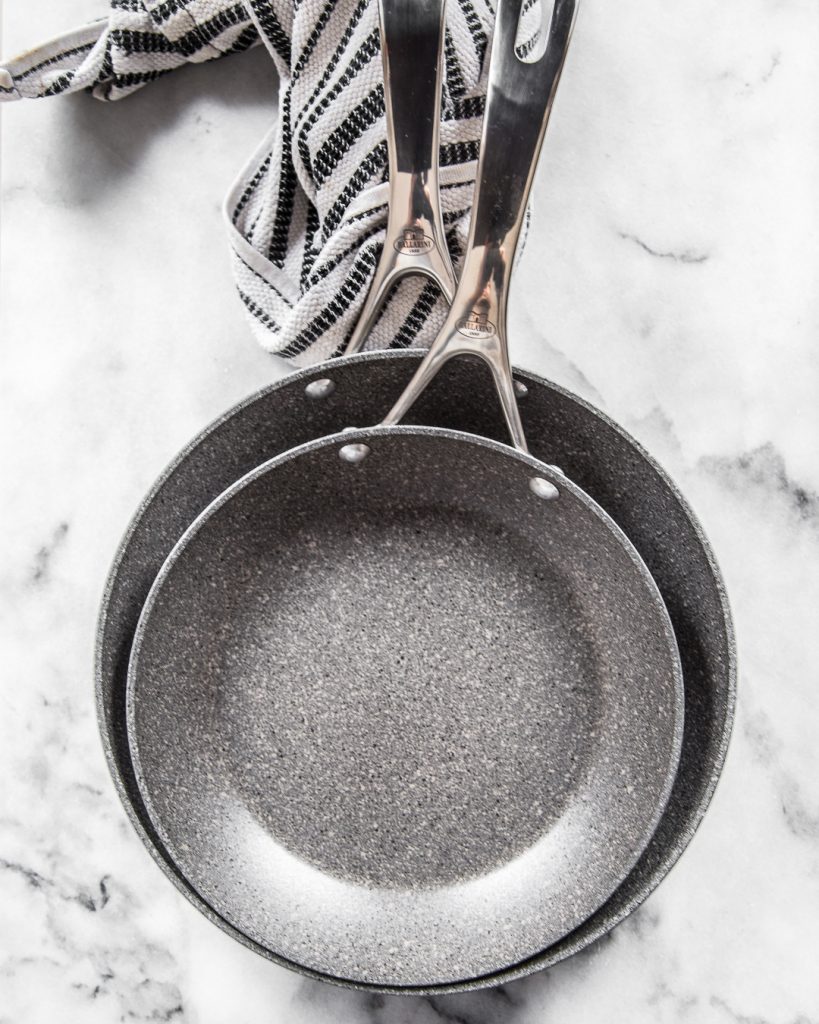 I would also be remiss if I didn’t mention the fact that I was initially inspired to make a Potato Galette because of the giveaway I’m hosting with Ballarini Canada.

If you haven’t already entered the contest, I’ve partnered with Ballarini to give away two of the Torino Granitium fry pans (pictured above) to one lucky winner. Full details can be found on the contest page here. But hurry, because the giveaway ends tomorrow, Dec 3, 2017.

Although Ballarini sponsored this post by supplying product for the giveaway, I can assure you that they have not influenced any of the opinions expressed here. I’ve been a fan of the Ballarini line of nonstick cookware for about a year now and have personally recommended them to family, friends, food bloggers and people on the street. I’m not kidding. I once overheard a young couple talking about which frying pans they were going to need for their new apartment so I interjected like the good samaritan that I am and told them to get at least one from Ballarini.

I am particularly fond of the Ballarini pans with the Granitium finish. There are several different models, the Torino is just one, but most are PFOA- and heavy metal-free. They are also far more durable than any non-stick pan I’ve ever cooked with (not including cast-iron). I am most often asked what type of cooking surface they work on and this again depends on the model. Most are suitable to all types of stovetop elements, including induction, but be sure to read the fine print before purchasing.

The Torino Granitium line is especially great since the more common plastic handles on the Ballarini pans have been swapped out for metal ones. Not only is the design a bit more refined and sleek, it makes the pans oven-safe – perfect for a potato galette! Or steak, which is what I ate the galette with!

Besides having a great oven-safe, non-stick skillet, the other tool you’ll need to make this Potato Galette is a mandoline. I swear by the Benriner model shown here. It’s made in Japan, high-quality and the gold standard according to many professional chefs. I use this to slice cucumbers, radish, zucchini, eggplant, carrots, cabbage, etc. It also happens to be a great tool for anyone making my Ratatouille recipe.

Now go forth and cook, my friends!

How to Make a Potato Galette: Step by Step 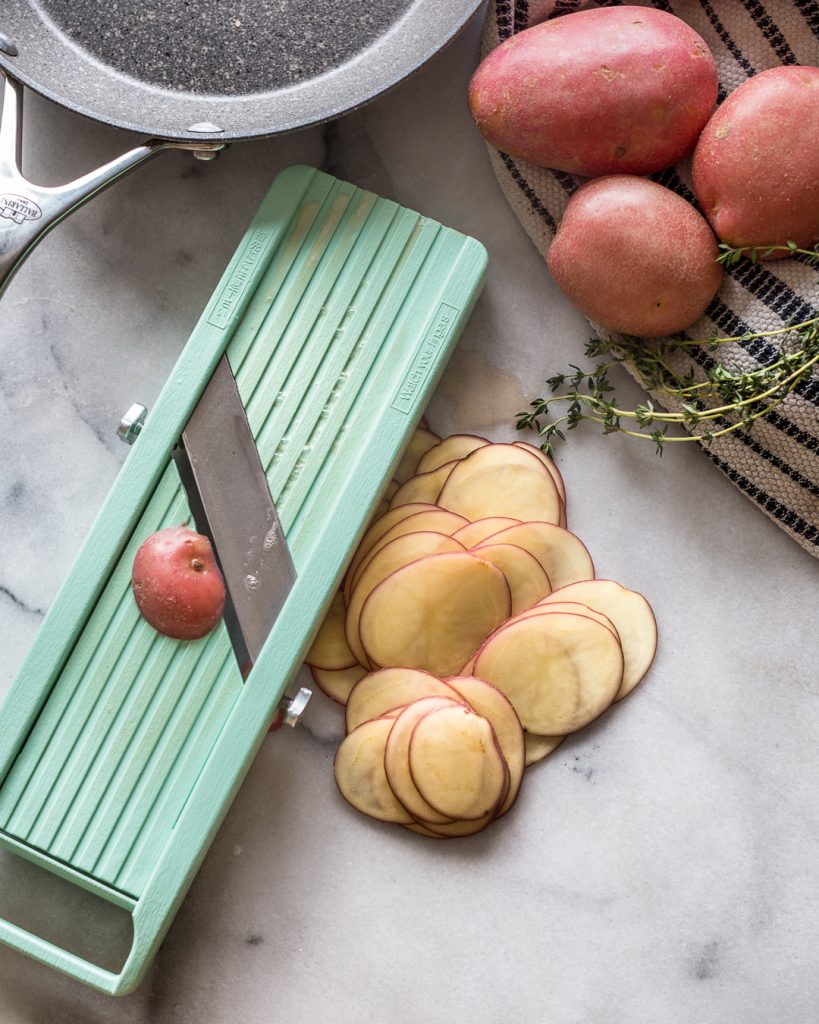 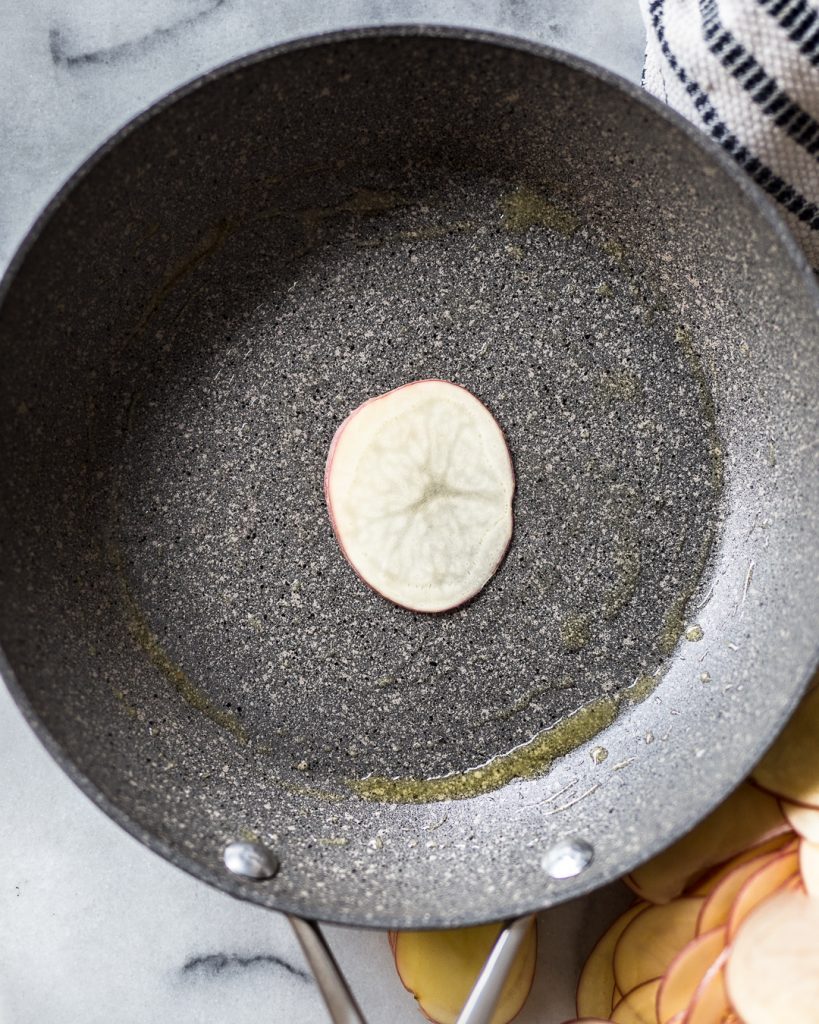 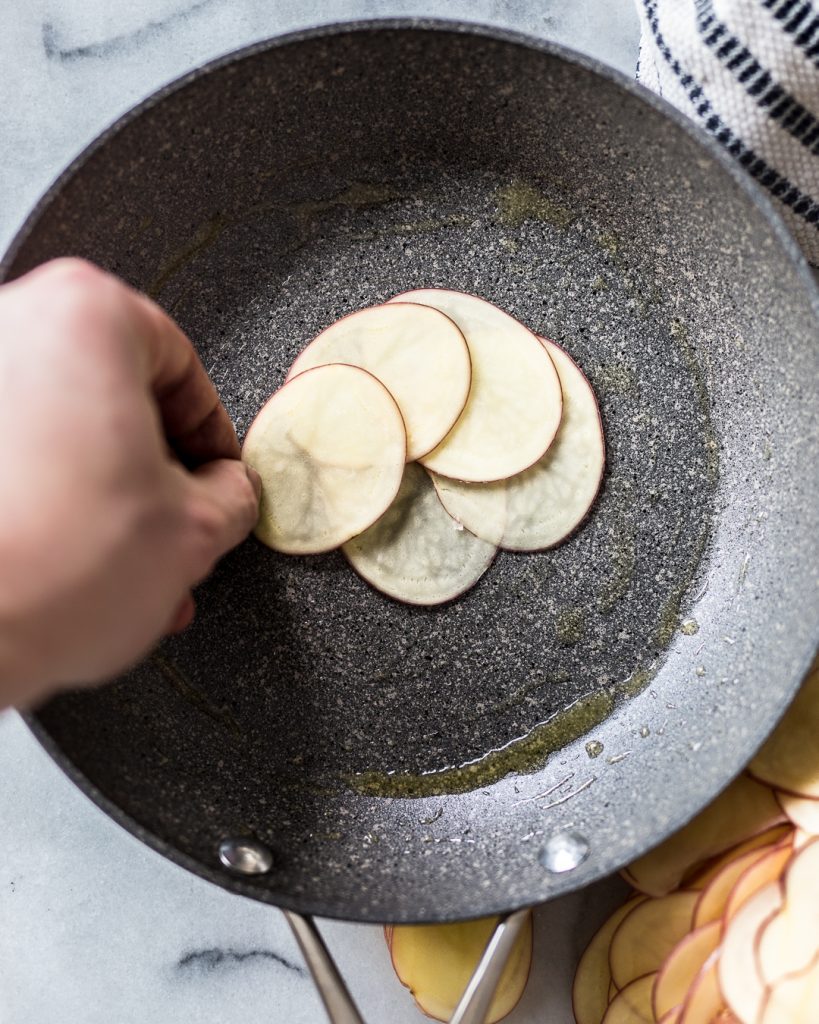 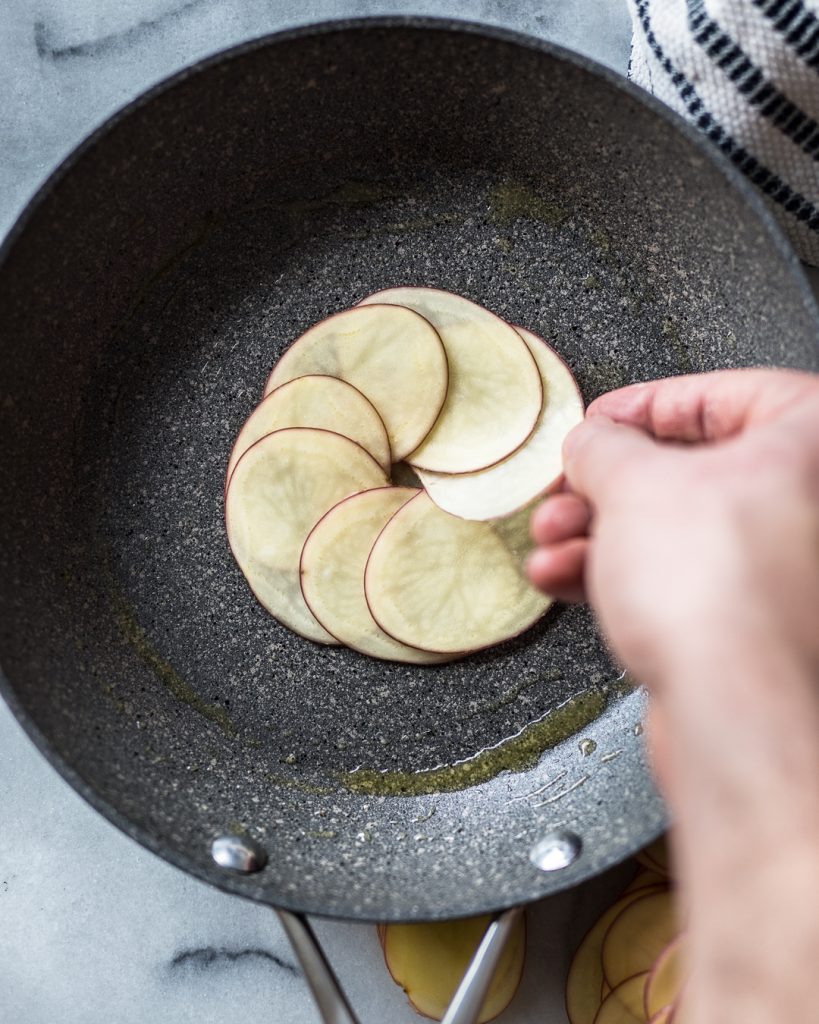 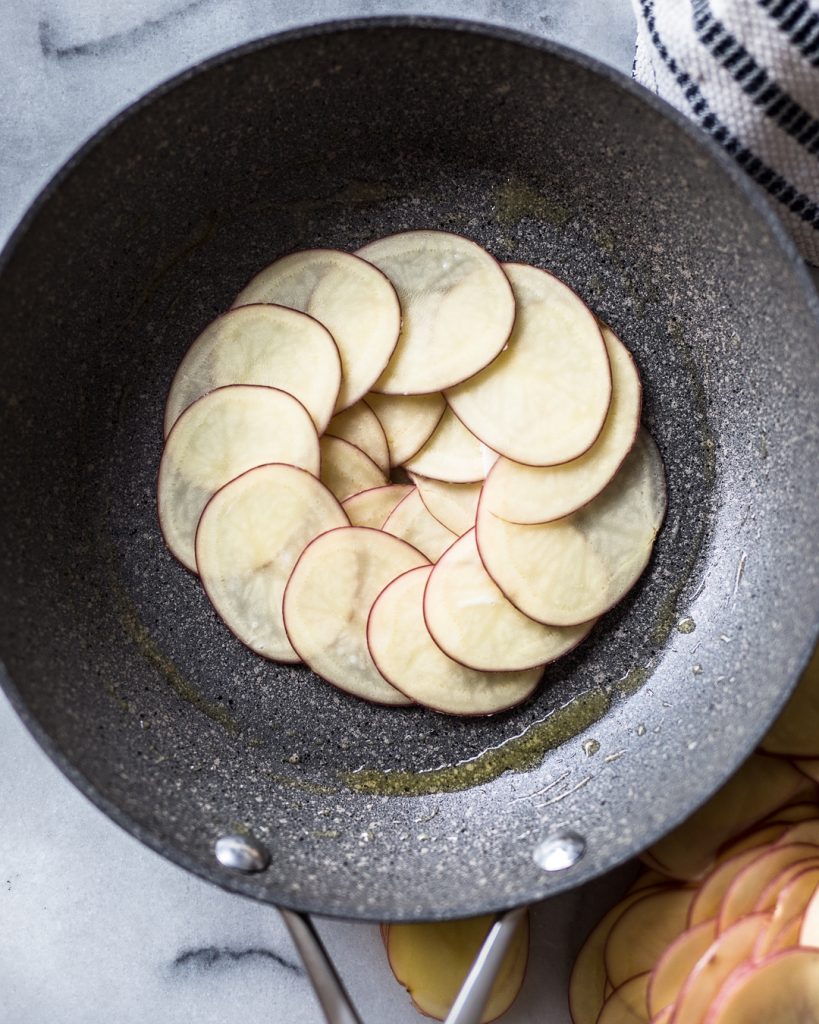 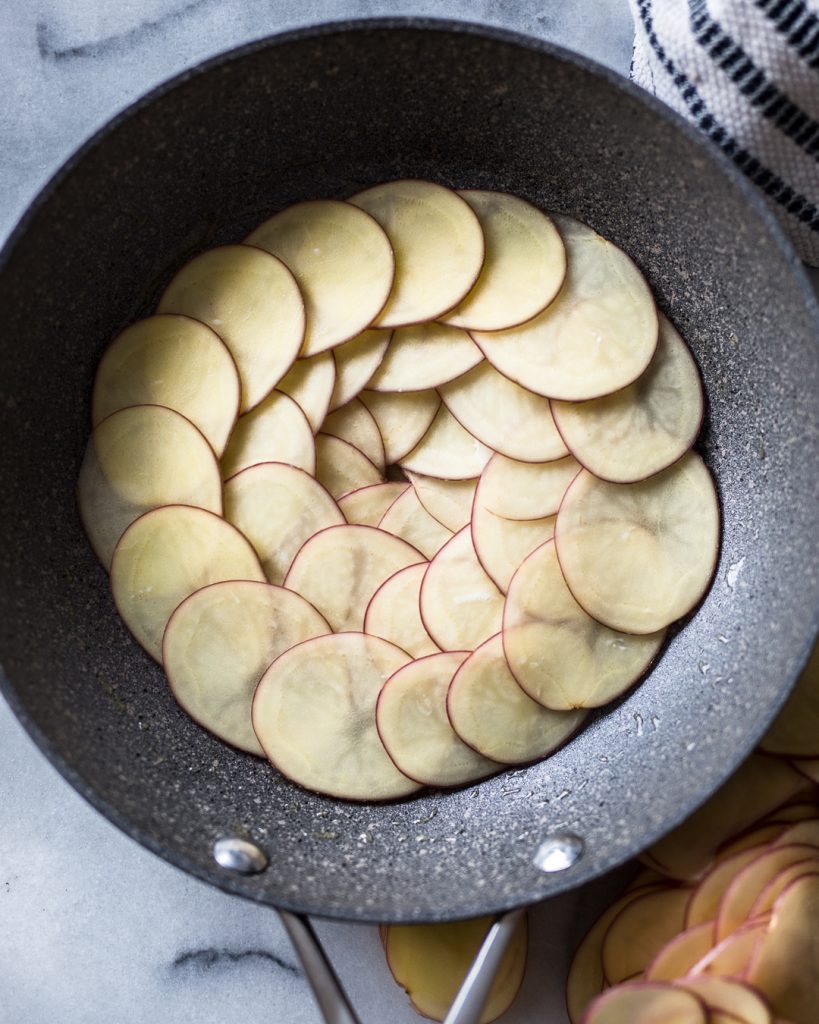 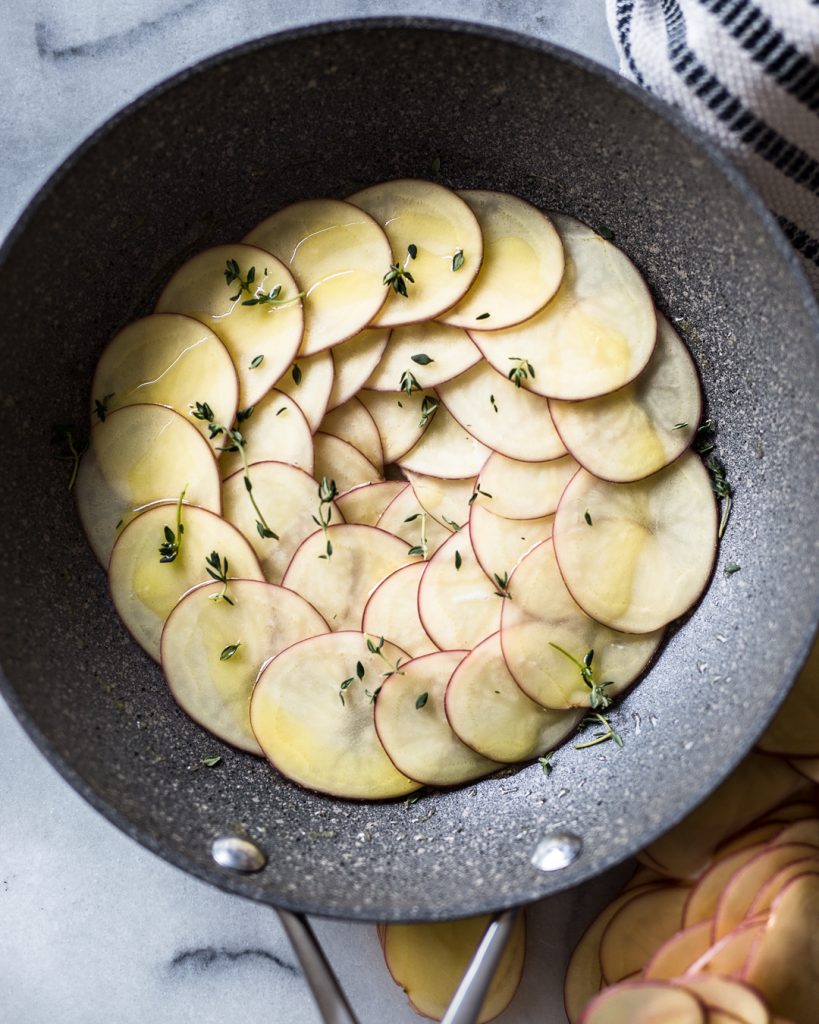 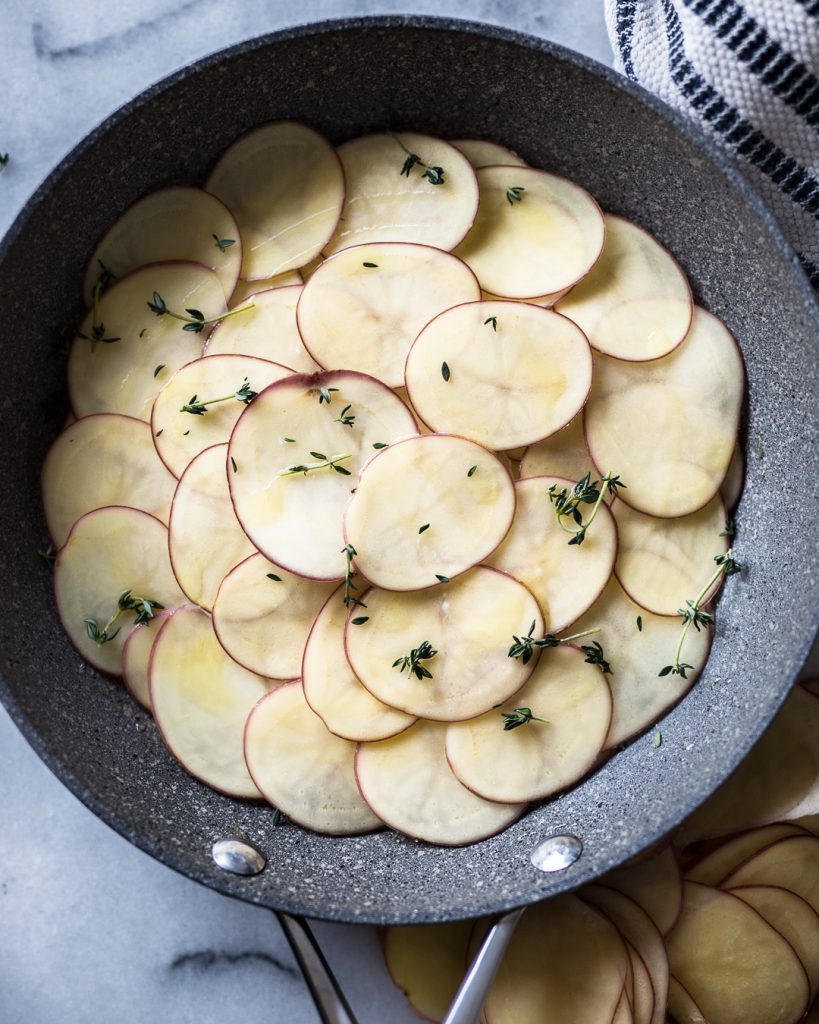 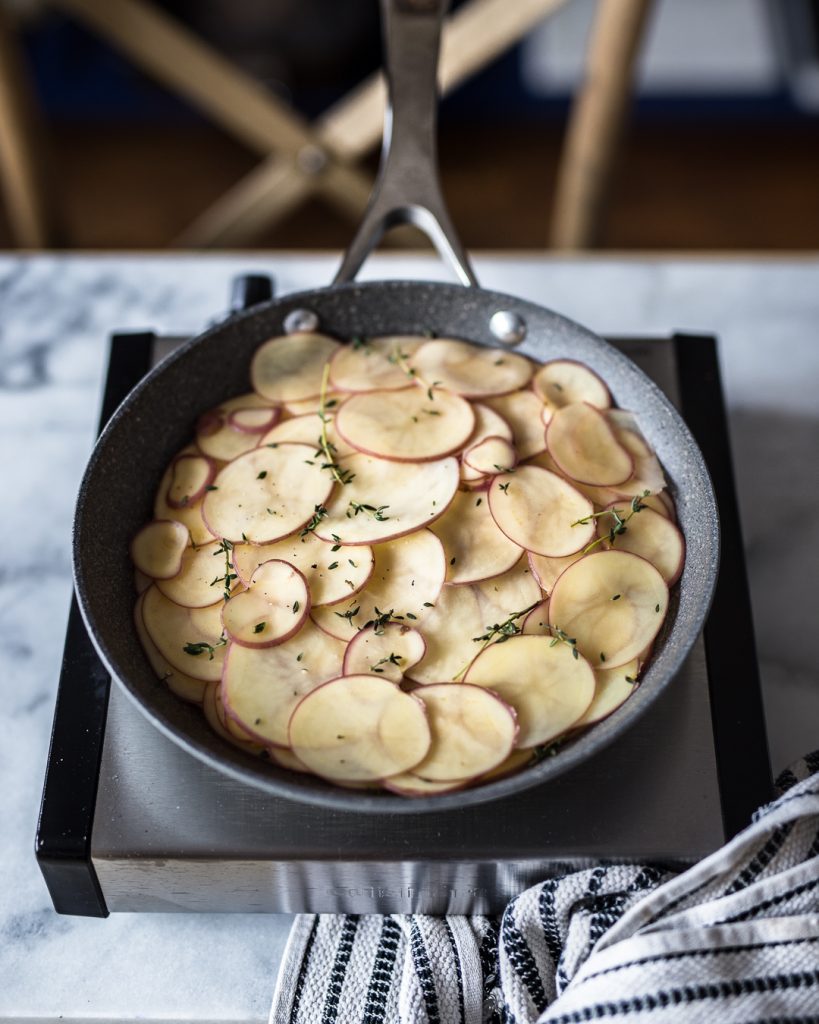 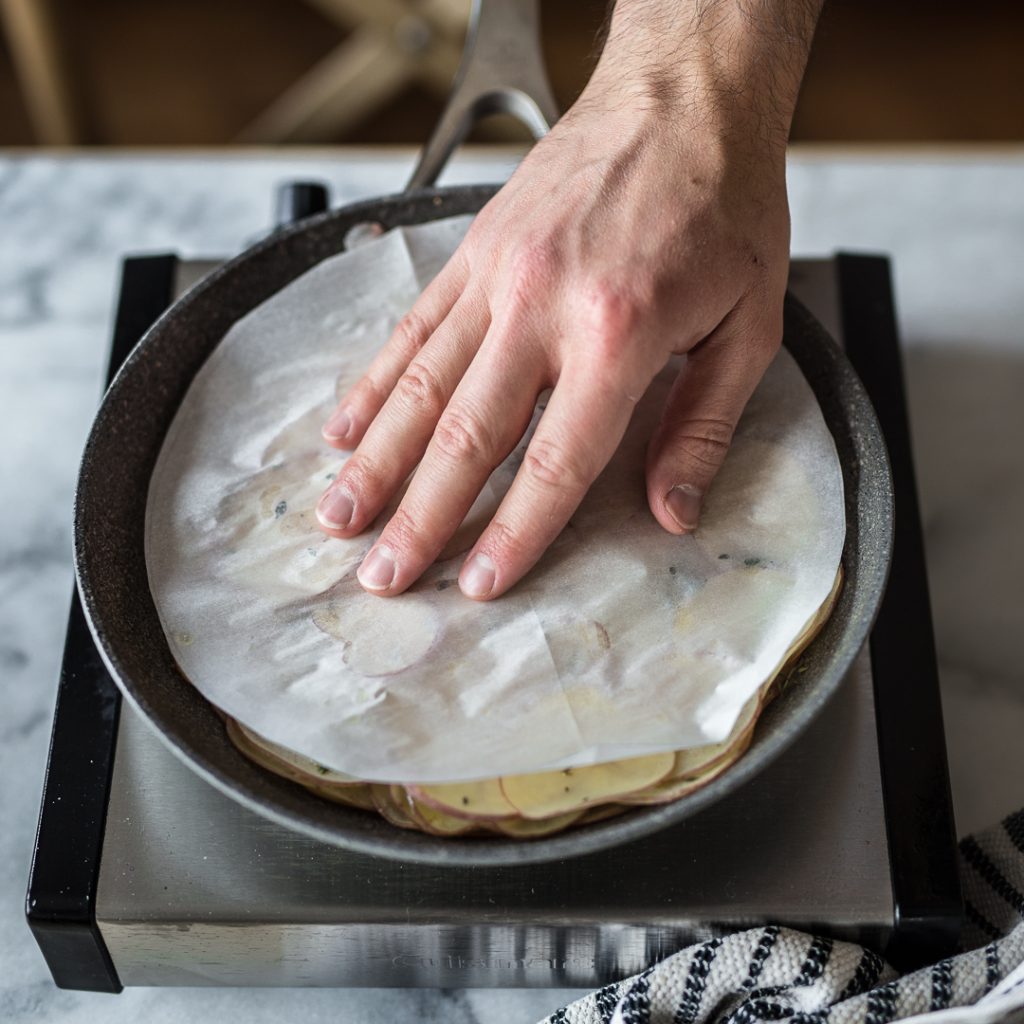 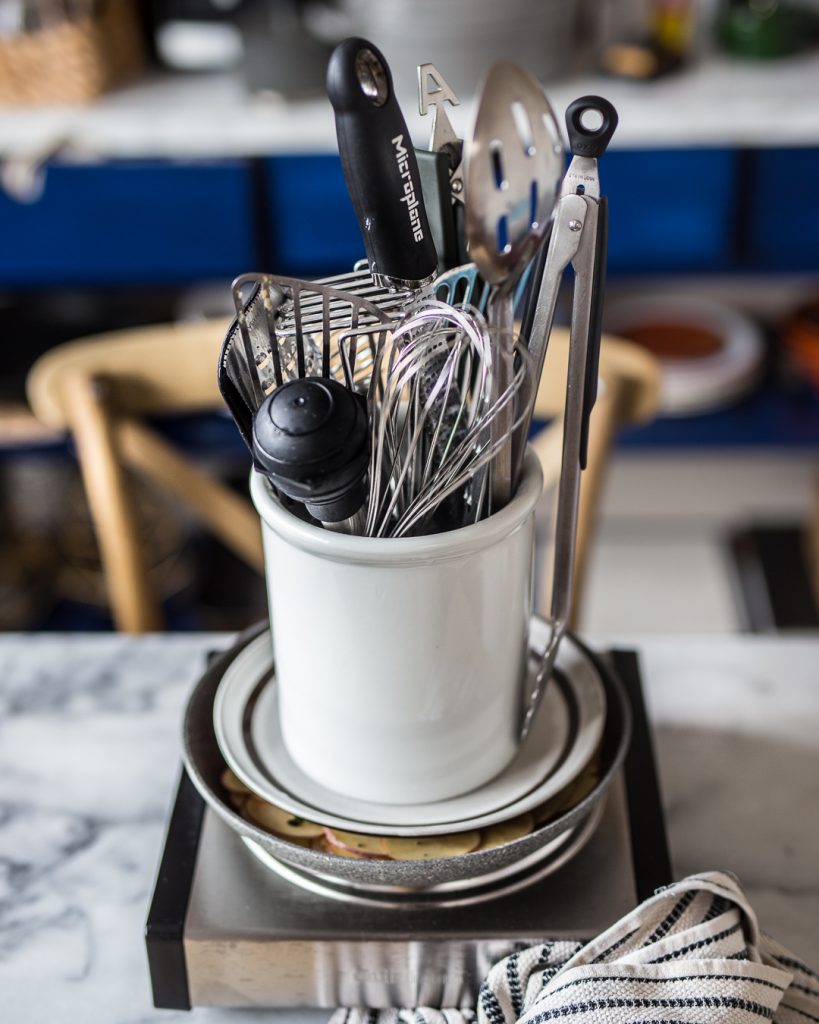 flaky sea salt – such as Maldon 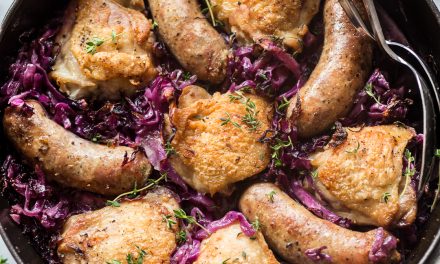 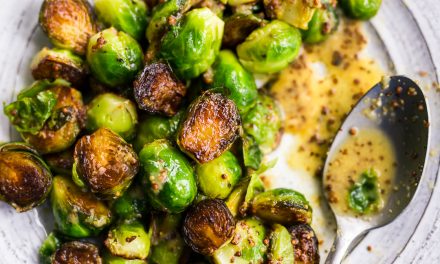 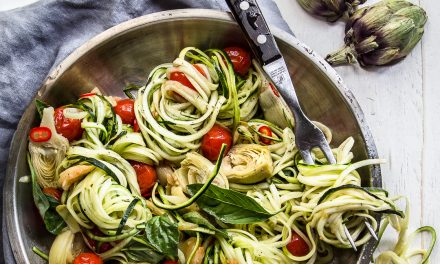