I am a bit obsessed with Pho (pronounced Fuh). Just ask anyone who knows me or has sat down to eat a bowl with me. It is a ritualistic experience, almost meditative. I am completely devoted to the soup and all of its contents. To properly eat a bowl of pho requires all of your senses. You gaze upon its beauty, admiring the complexity of its colour, lines and composition. You smell its intoxicating aroma as it perfumes the air around you. You handle the chopsticks and spoon, which can be foreign to some but old friends to others. You can hear the sound of the noodles swirling through the broth – it’s as peaceful as a gentle creek on a spring morning. Finally, you raise a generous gathering of steaming noodles to your mouth. You give them a quick blow in the hopes of cooling them down a bit. It doesn’t work but you don’t care. You gently shovel them into your mouth and close your eyes. At first you taste the texture of the individual strands of noodles, each one has been perfectly cooked and is still a bit springy. Then a bit of the flavours from the broth permeate through your palate. It’s faint, so you go in for some more. The broth is complex, to say the least. Sweet, earthy, salty, spicy, and bitter. Cinnamon, clove, roasted ginger, beef, anise, fennel, coriander and maybe even some secret ingredients are all playing together in every nook and cranny of your mouth. It’s truly magical, surreal even. The next 10-15 minutes are spent analyzing the flavours of the soup, contemplating the process of its creation. By the end of it you’re on a sensorial high and you don’t want to come down. 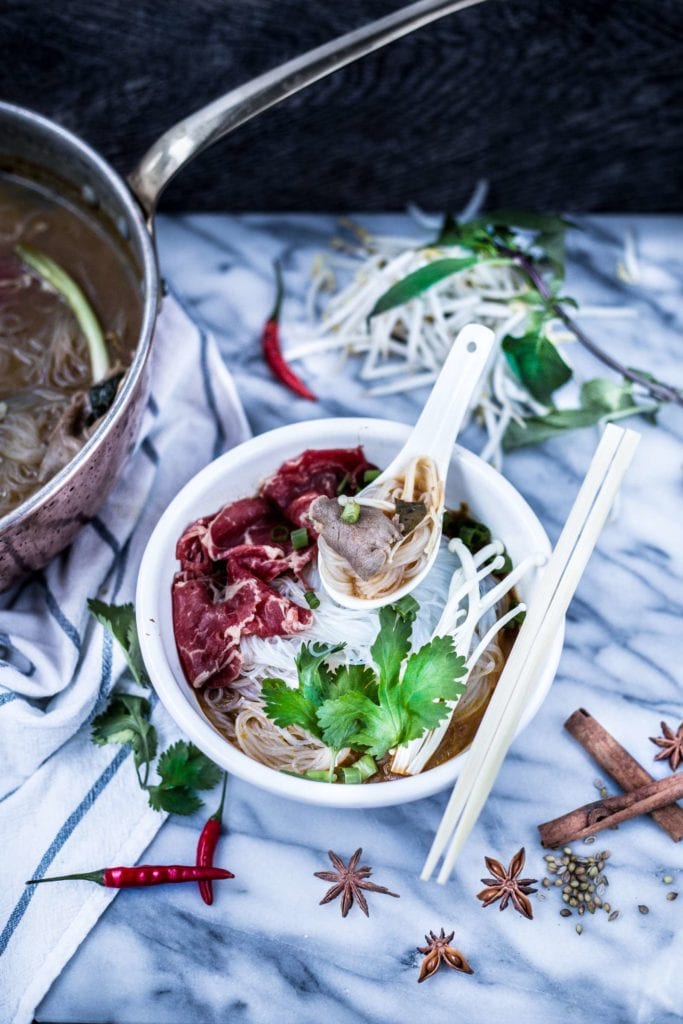 In fact, I still remember the first time I ever tried a bowl of this delicious, steamy, beefy, noodle-y goodness. For about 10 years or so I worked as a part-time valet parking attendant. It was a great gig that let me drive some cool cars, meet some cool people and helped offset some of my university tuition. One night, after an event that went late into the evening, a bunch of the guys were hungry. The problem was nothing was open! One of the guys suggested we hit-up a Vietnamese noodle house in Markham. I had no idea what to expect but I was game! We arrived at the restaurant and ordered some bowls of noodle soup. Everyone got the same thing: #207, Rare Beef Pho. If you’ve ever been to a Pho house, you know what I mean about ordering by the numbers! The soups arrived piping-hot and loaded with rice noodles, thinly shaved slices of rare beef, and some bits of scallion, white onion, and cilantro. Bean sprouts, Thai basil and lime wedges were served on the side. The beef broth was dark-brown and cloudy with some glistening droplets of fat on the surface. It looked like everything my dreams were made of! Let’s just say I slurped down every heavenly drop of it, except for what I managed to get all over my shirt. Within a few hours I began feeling fairly lethargic and extremely thirsty. It was a familiar feeling in my pre-Paleo days. So, I settled in for my food-coma.

The next morning my mouth was dry and pasty. I was extremely dehydrated so I chugged a few cups of water. I didn’t realize it at the time, but the broth was obviously very salty. I wasn’t sure what else was in the cloudy broth, but it didn’t sit well in my system either. In full disclosure, I haven’t stopped eating Pho, but I have cut back. It’s a guilty pleasure of mine. Catalina and I will usually go for a bowl once in every two weeks or so on our cheat day.

It wasn’t until very recently that I decided to make it myself. Any good Pho worth its weight takes at least 12 hours to create. It starts with some good beef bones, preferably with marrow. Then a variety of spices and aromatics are added and it’s all left to simmer for the better part of the day. But I didn’t have the time or patience to be true to the traditional recipe. I needed a bootleg version, and I needed it quick. So I devised a solution using prepared stock and a few of the key spices and herbs.

The result was not as complex in depth or flavour as slow-cooked pho. However, it was very tasty and you might even fool the non-expert into thinking you made the whole thing from scratch. The best part is that I controlled the ingredients and the amount of sodium. The most important part of this recipe will be the stock so be sure to use a high-quality one with no artificial ingredients. I like to use low-sodium chicken stock since I prefer to season things myself. Progresso is good and you can purchase it on Amazon, or you can get your friend to smuggle some back from the States for you! No matter what you use, make sure it is free of things like yeast, wheat starch, potato starch, sugar, MSG, and a host of other things you don’t want in your body. You’d be surprised what kind of stuff companies will put into packaged stocks so please read the ingredients list. Obviously, it would be best to use homemade stock that you can prepare and easily freeze in some mason jars ahead of time.

Instead of rice noodles I used mung bean noodles. Mung beans are a legume and are not 100% paleo – full disclosure. However, unlike rice noodles, I don’t crash after a bowl of mung bean noodles. They are very high in carbohydrates so eat them sparingly and during the day so that your body has an adequate amount of time to digest and utilize their energy. You could just as easily use sweet potato noodles here (which are great in other recipes like this Jap Chae). Or you can go with some zucchini noodles for a truly Paleo experience!

If you’re a vegetarian, you can make the exact same thing using Vegetable stock (Progresso makes a good one as well), and use mushrooms instead of beef. Any mushroom will work but I would recommend shiitake, oyster, portobello or enoki.

No matter what, I’m pretty sure you’re going to love this Pho, especially if you’ve never had it before.

4-6 ounces thinly shaved ribeye – ask your butcher to shave the beef for you as opposed to slicing it yourself!

Enoki Mushrooms – entirely untraditional but I love them! 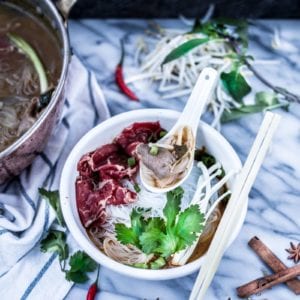