Growing up, I remember eating lots of lamb in my household. It was and still is my father’s absolute favourite meat. His go-to dish was lamb chops that were simply seasoned with a bit of salt ‘n pepper and pan-fried to a golden crisp. They went on the plate alongside a few slices of freshly-cut cucumber, tomato, raw garlic, and whole stalks of parsley and/or dill and/or cilantro. A mélange of peas and corn straight from the can usually accompanied the smorgasbord. He still makes it to this day, unapologetically and unaltered. In fact, I sometimes crave it – more so because of nostalgia than taste. Paleo legume-qualms aside, I despise corn from a can. I do, however, love, love, love lamb. 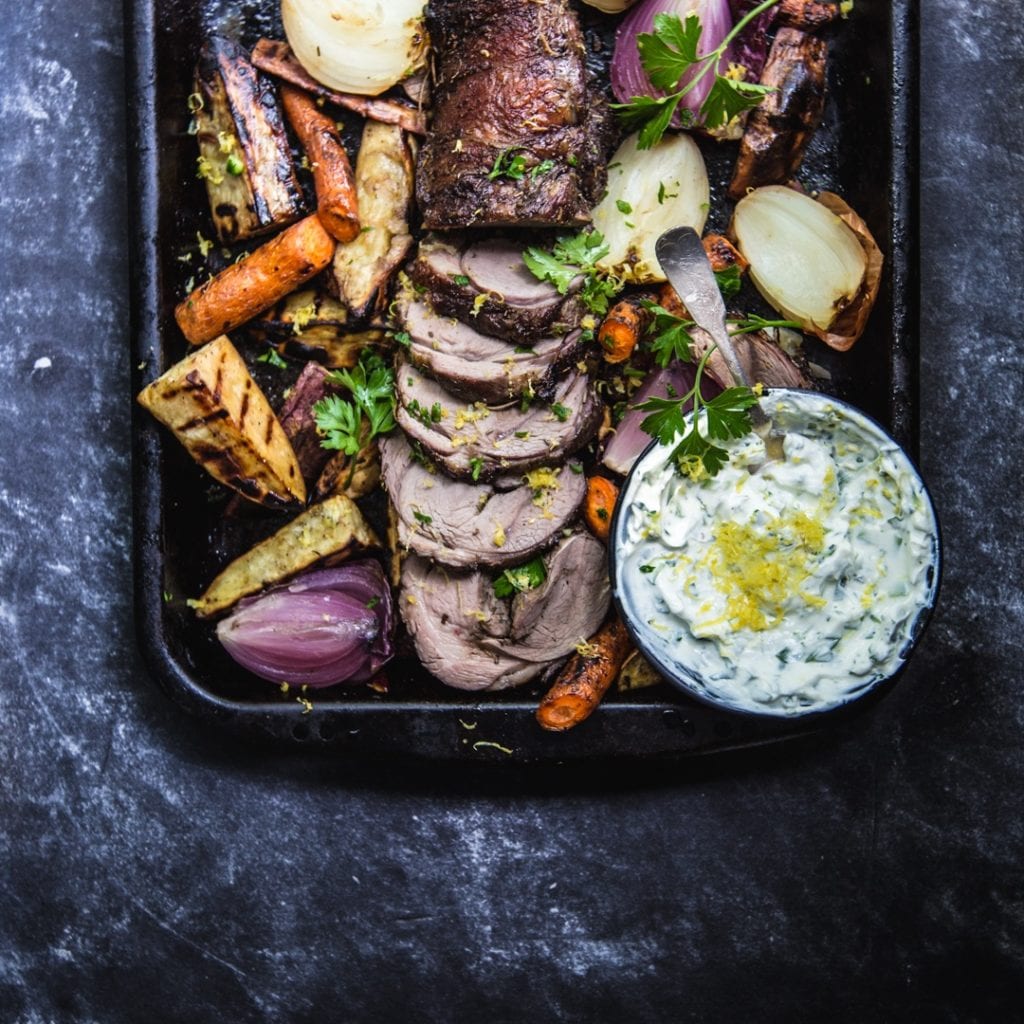 A few weeks ago I was cleaning out my parent’s basement and came across a long, metal spit with 2 medieval-looking spikey prongs on it. Turns out it was the rotisserie attachment for the BBQ they purchased years ago. It was like finding a hidden treasure. I was ecstatic! I wanted to use it right away. Thoughts and questions poured into my mind: Why haven’t we used this? Does it still work? What would Francis Mallmann do?

LAMB!!! Francis would make lamb! As luck would have it my mother happened to have a leg of lamb in the fridge, as one obviously should at all times. She had plans to throw it in the oven until I came bursting up the stairs yelling at the top of my lungs that we were firing up the grill! I nearly trampled my dogs mid-staircase, I was so excited. I won’t lie to you, the lamb came pre-marinated and deboned from the local butcher. The ingredients consisted of rosemary, garlic, lemon zest, lemon juice, olive oil, salt and pepper. My guess is a 1/2 cup rosemary, half a head of garlic, zest and juice of 1 lemon, 1 cup olive oil and a snow fall of salt and pepper. Straightforward enough for one to replicate at home – I think?

Note that this recipe would also work in the oven if you do not have a BBQ or accompanying rotisserie attachment. Simply place the lamb directly on the top rack of the oven and position the baking tray with yams and carrots beneath it so as to catch all of the juices. I have done this in the past and it works wonders!

The store-marinade screamed for something Greek to go with it. Potatoes were the first thing that came to mind. Yams, however, are a more glycemic-friendly substitute and when roasted alongside carrots in the drippings of the roasting lamb they would make a pretty spectacular side dish. Tzaziki was the next obvious move but what to do about the yoghurt traditionally used? I’ll have you know that with enough lemon juice, garlic, cucumber and herbs, coconut cream makes a very good substitute indeed. Don’t knock it ’til you try it. The most basic of Greek salads rounded off the feast and everything was enjoyed al fresco in the summer evening air, as it should be.

*This recipe was created in collaboration with @menwithcuisines. You can follow them on Instagram for mouth-watering food photography.

For the Coconut Tzaziki 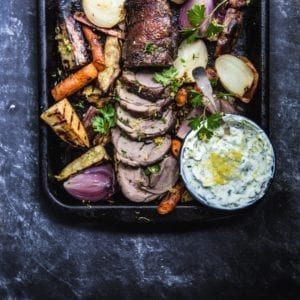