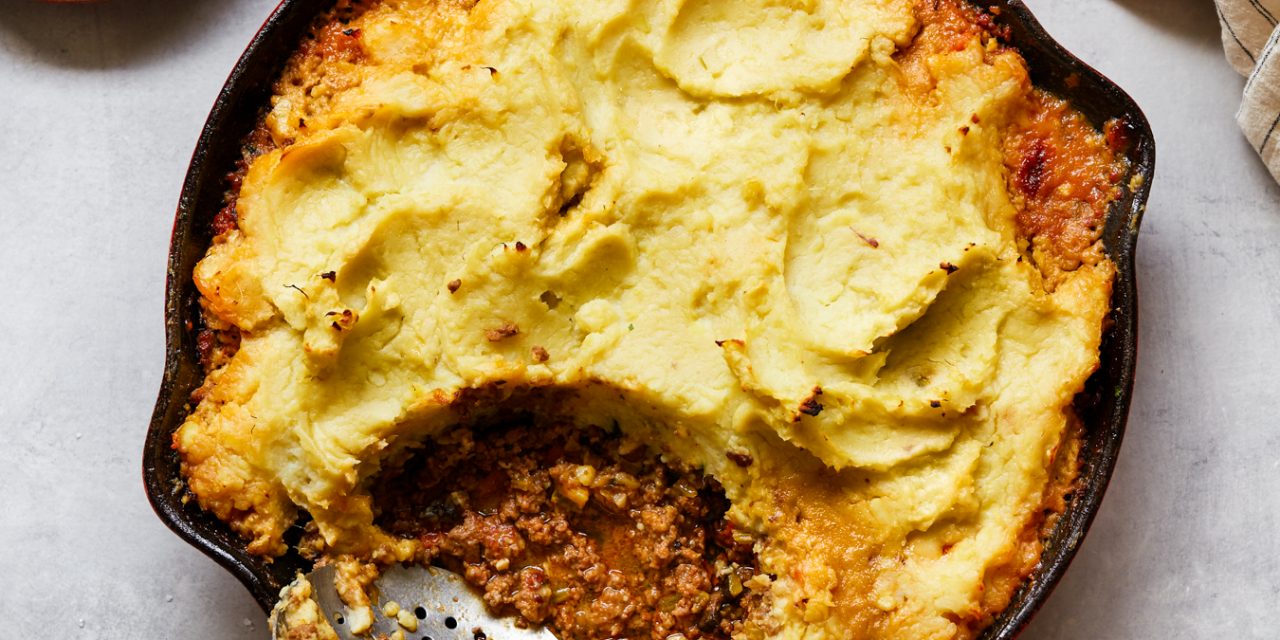 If you’re in the mood for something hearty and delicious, but also healthy, try my take on a classic Shepherd’s Pie. It’s just as comforting as the ones you may have grown up eating and just so happens to be Whole30, Paleo, dairy-free, and gluten-free! It’s also loaded with extra veggies like mushrooms and zucchini, making it even more filling and nutritious. 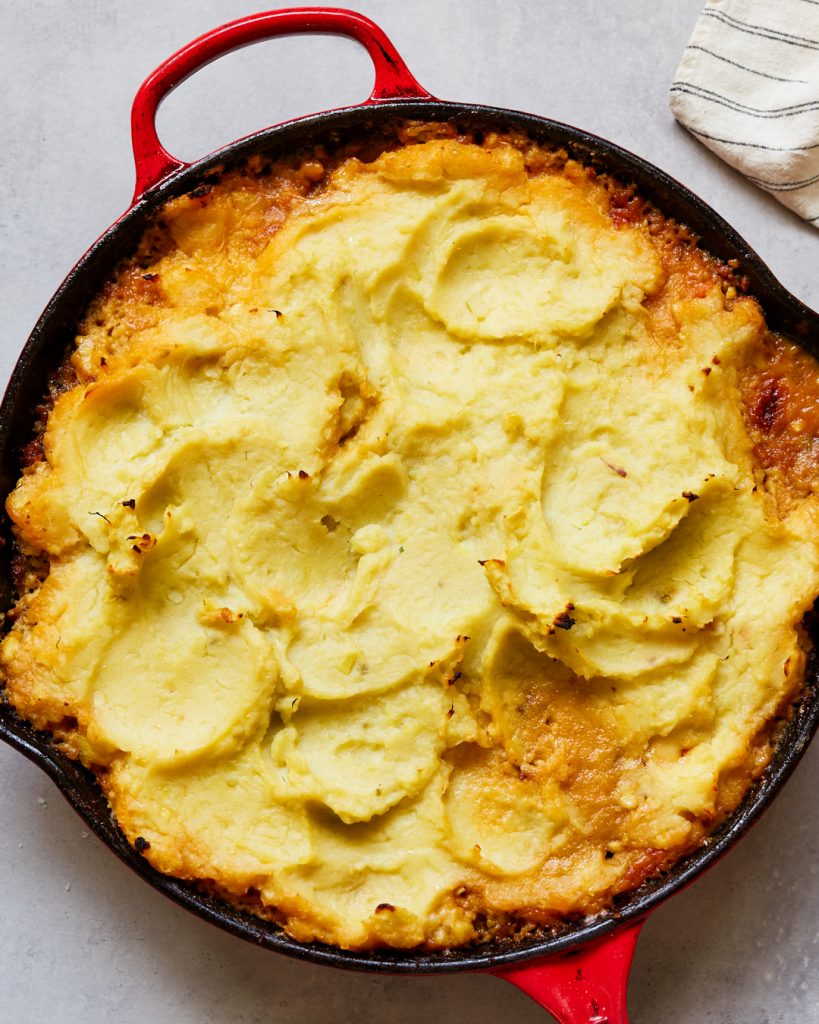 What is Shepherd’s Pie

Shepherd’s Pie consists of ground red meat (usually lamb) that is cooked in a gravy consisting of onion, carrots, celery, and peas, and stock. The meat filling and gravy is added to a casserole dish and topped with mashed potatoes before being roasted in the oven to finish. Sometimes, grated cheese is added to the topping for colour, flavour and texture.

Depending on where you are and who made the dish, it may either be called Shepherd’s Pie or Cottage Pie. The main difference between a shepherd’s pie and a cottage pie is that the former uses lamb and the latter uses beef. Aside from that difference, both versions are usually identical. 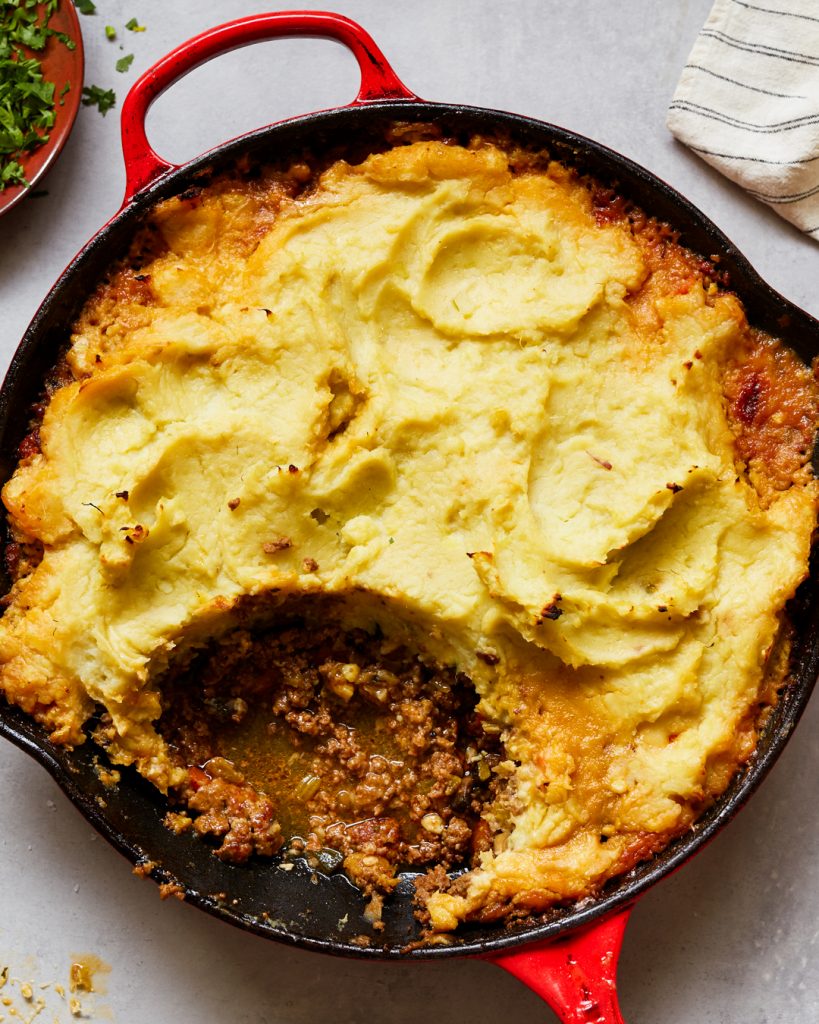 What Makes My Shepherd’s Pie Different

As mentioned, this is my take on the classic version of the dish. I’m biased, but I absolutely LOVE it. It’s super flavourful, satisfying and comforting, but doesn’t leave me feeling weighed down or bloated.

Instead of regular white potatoes, I like to use mashed Japanese yams for my pie topping. As in my recipe for Caldo Verde, the yams mimic the yellowish-white colour of regular potatoes, but adds a subtle sweetness that I think is really delicious. Japanese yams are both Paleo and Whole30-compliant, making them great for both programs, and are also low-glycemic, so they’re a perfect option for anyone monitoring their blood sugar levels.

You could definitely substitute sweet potatoes here, if that’s what you have or prefer. The recipe and measurements would stay the same. Of course, sweet potatoes are sweeter than Japanese yams and will give an orange colour to the finished dish, but that not may not be a bad thing.

Alternatively, you could try using mashed cauliflower for a keto version. I estimate you would need at least two large heads of cauliflower to cover the meat filling.

Last but not least, you could use good, ol’ regular white potatoes! I would recommend russets since they are idea for mashing. You may find that you need a bit more stock in the mashed potatoes if using regular potatoes, especially russets, which are a bit starchy and dry. So be sure to add a bit of stock at a time until it reaches a smooth, yet chunky consistency.

You don’t commonly find spices in shepherd’s pies, but I really love to add smoked paprika, regular paprika and some onion powder. I find they add a lot of flavour without overpowering the dish.

Smoked paprika adds a beautiful colour to the filling and packs a serious flavour punch. Because it’s strong and can overpower the dish, I use it in combination with regular sweet paprika because I want more colour in the gravy.

I also use onion powder, which adds flavour and helps to naturally thicken the gravy. I don’t like adding any alternative flour thickeners if I don’t have to. Instead, I reduce the stock down by half to thicken it and concentrate the flavours. 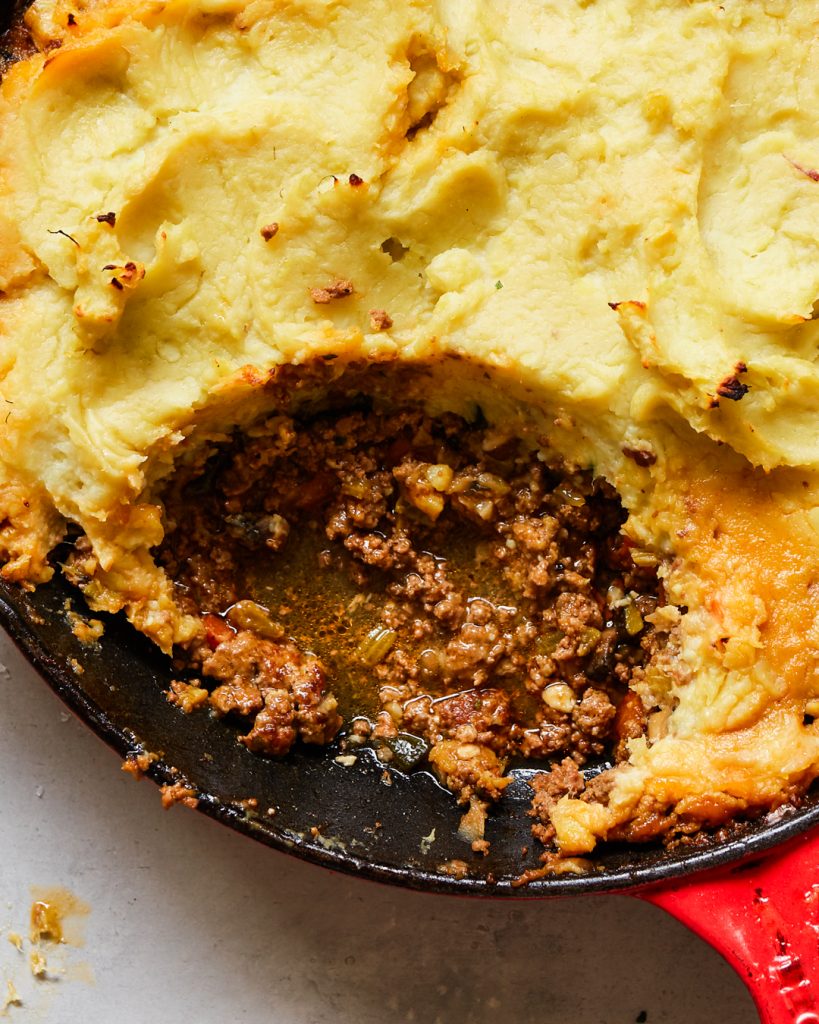 What You Need for Shepherd’s Pie

I like using ground lamb in my shepherd’s pie. Not only do I prefer the flavour of lamb, but it also tends to be heart-healthier because the lamb are more often grass-fed. Of course, if you don’t like lamb or are having a hard time finding it, then you can use ground beef. I have used beef on plenty of occasions and it still comes out delicious. For the most flavour, avoid extra-lean or grinds with less than 10% fat content. Fat equals flavour.

Carrot, celery and onion are the foundation here. I always add a good amount of gahhhhlic too because, as you may know, I love it. I also include mushrooms and zucchini for a flavour, texture and added nutrition. They’re optional, but it’s an easy way to sneak in some extra veggies, especially if the kids are picky eaters.

Peas are also very common in shepherd’s pies. Until recently, they were off limits during a Whole30, but that rule has recently changed. So, if you want to start including them here and experimenting with how they make you feel, then go crazy! About 1 cup will do.

I like using chicken stock to make my gravy. The more flavourful your stock, the more delicious your shepherd’s pie will be. For best results, you can use my Mama’s Chicken Soup recipe, strain any leftovers and use that as your stock. Alternatively, you can use some chicken bone broth for a stronger flavour. Beef bone broth would also work, but will make for a much richer and more robust finished product – not necessarily a bad thing.

You can either roast the Shepherd’s Pie in a skillet or casserole dish. I’ve recently started cooking mine directly in the skillet I use to make the filling. This just saves me some extra clean up once I’m done cooking. This recipe makes around 6 servings and involves 2 pounds of ground lamb, so it’s important to use a pan that is big enough to handle the filling and gravy, but also shallow enough that you can easily scoop it out when serving.

I recommend an 11″ or 12″ cast-iron skillet, like this one from Le Creuset or Staub. I prefer an enamel-coated cast-iron because it doesn’t require the same amount of maintenance as uncoated pans. The trade off, of course, is that they are more expensive.

If making a larger batch, a casserole dish.

Finishing it on the Grill

For a truly one-of-a-kind shepherd’s pie, I HIGHLY recommend trying to finish it on the grill, rather than in the oven. I recently cooked it on my Traeger Grill with mesquite wood pellets and it absolutely blew my mind. It was hands-down one of the best things I’ve ever Traegered (and I’ve Traegered plenty). 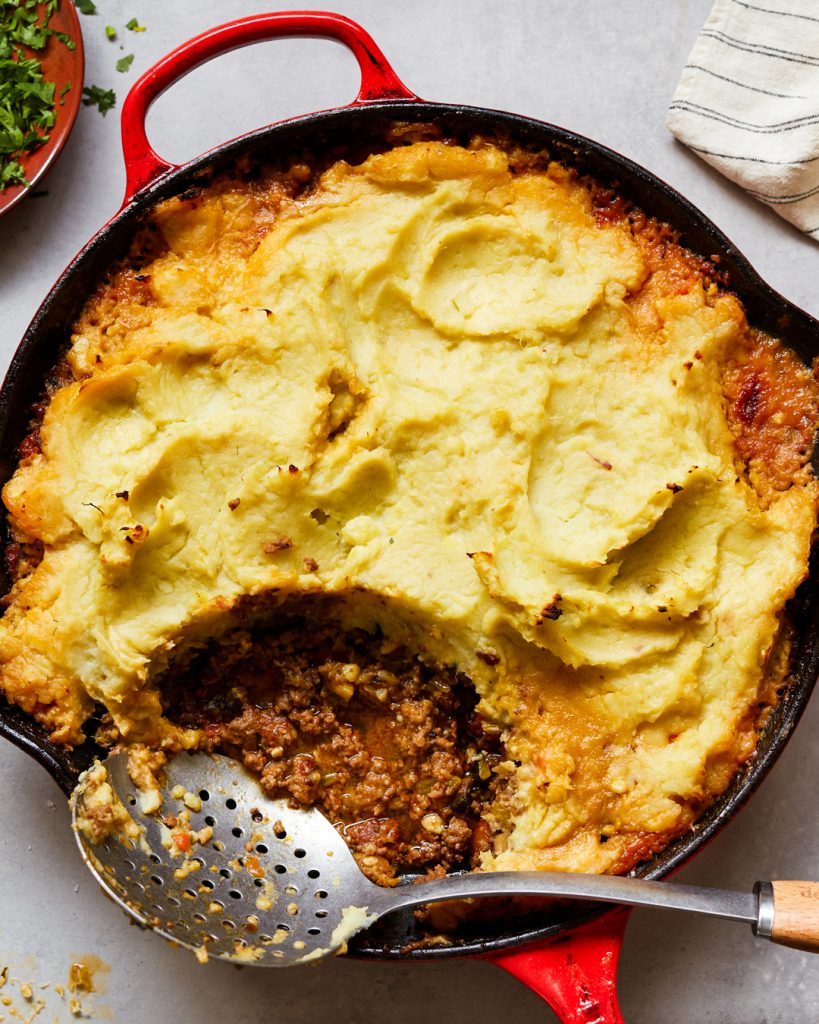 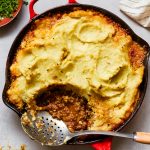 If you're in the mood for something hearty and delicious, but also healthy, try my take on a classic Shepherd's Pie. It's Whole30, Paleo and Gluten-Free.

This shepherd’s pie recipe was originally created as part of my Paleo Dude’s Guide to Cooking: a three-part series that tackled weekend cooking for the modern paleo guy, developed in collaboration with the Human Fit Project for Men’s Fitness Magazine, now called Men’s Journal, back in 2016! Time really does fly by! 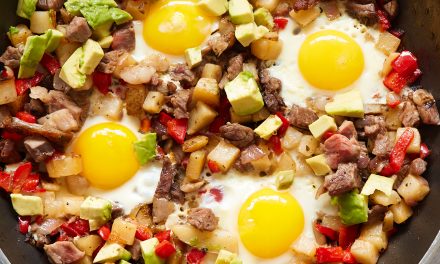 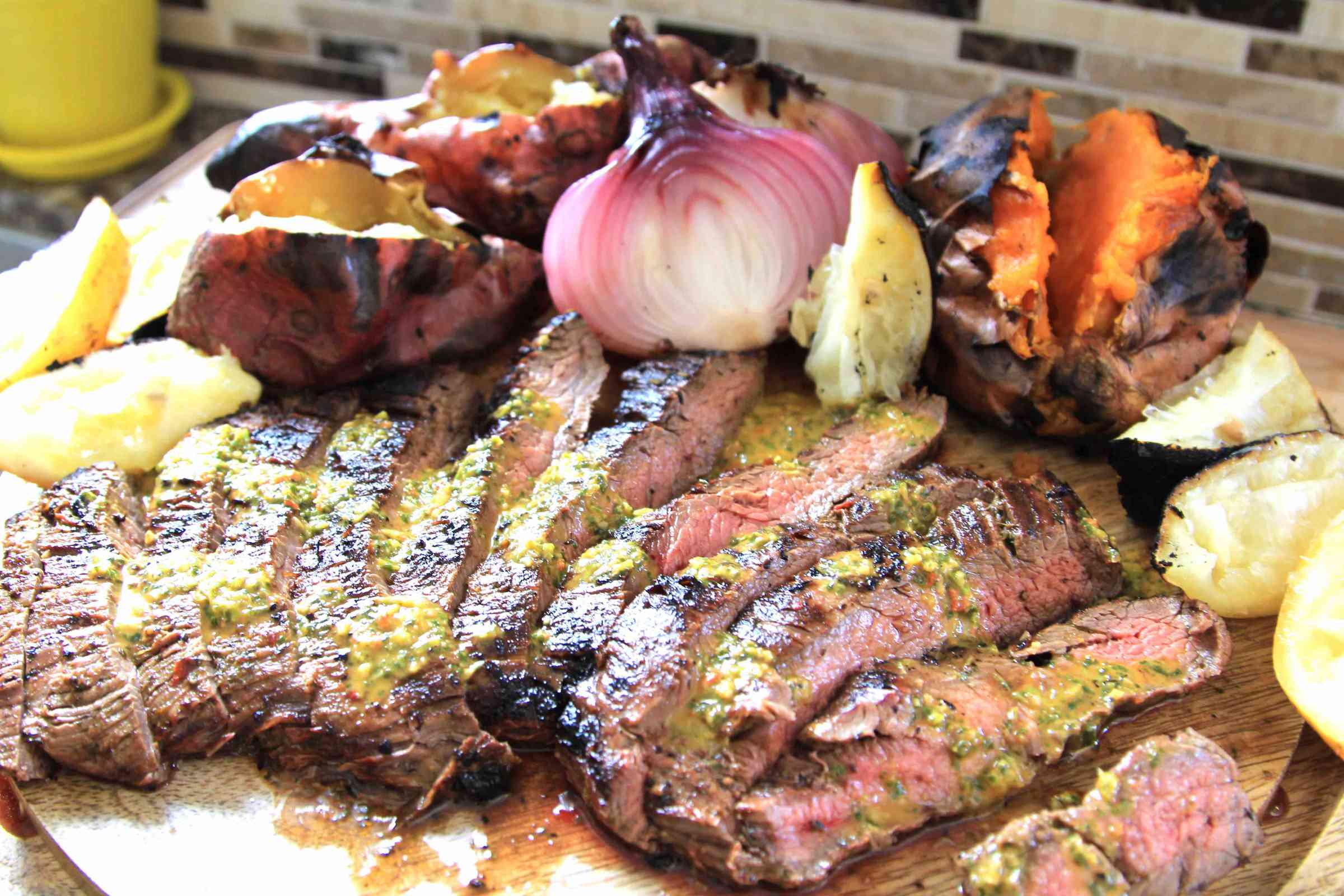 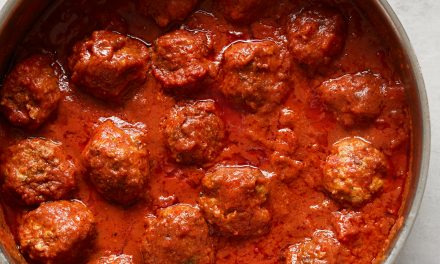 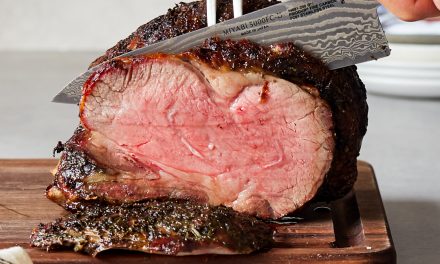