This Whole30 Grilled Chicken Romesco is incredibly delicious, super easy to perfect and requires only a few ingredients. The chicken and romesco sauce take less than an hour to cook and can both be made in the oven or on the grill. The best part is that even though the grilled chicken romesco is in fact very easy, it looks and sounds fancy enough that you can make it for a dinner party! 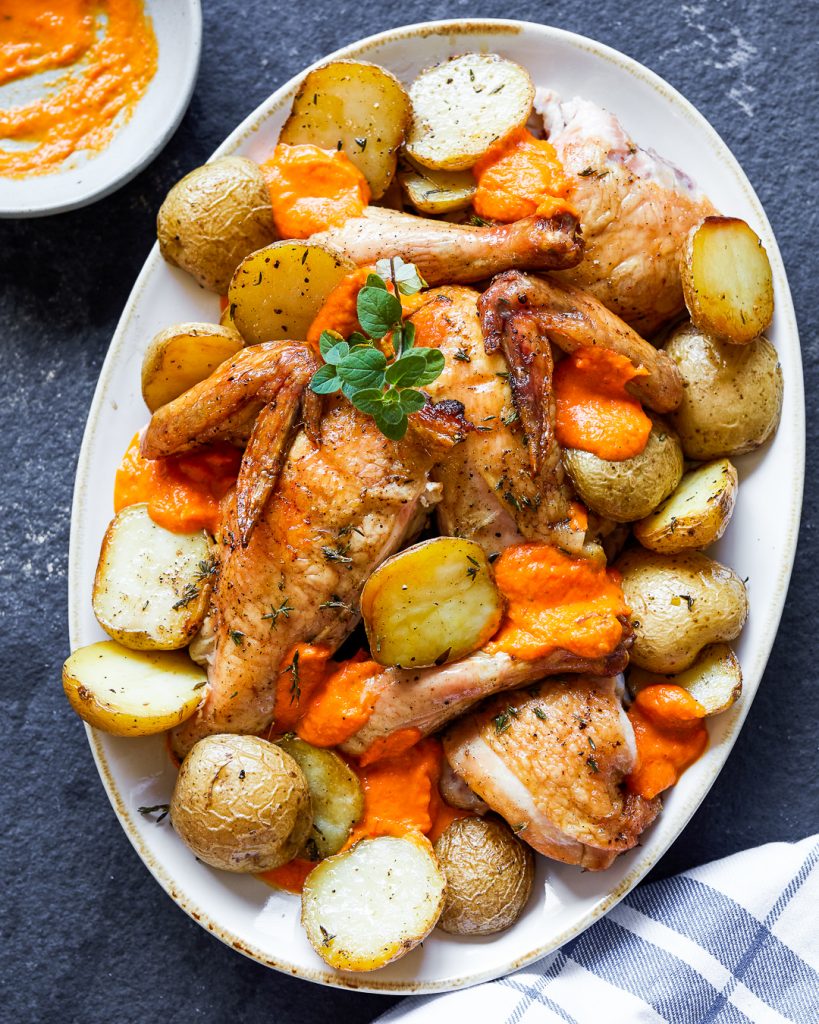 If the grilled chicken looks familiar to you it’s because it’s identical to my Emergency Roast Chicken. The only difference is that I grilled it on my Traeger wood pellet grill, which infused it with delicious wood-fired flavour! Seriously, I have yet to cook chicken on my Traeger and not have it come out perfectly!

As always, I prefer to half-spatchcock the bird, cutting along only one side of the backbone and leaving the other side intact. The bits of meat along the backbone are actually my favourite part of the chicken. I think of it as the chef’s cut and keep it all to myself, nibbling away at it while I carve the rest of the bird for my family. Not only is it delicious, but it’s also great to reserve for homemade bone broth. I also like to keep the backbone intact while roasting because it renders precious, schmaltzy juices into the roasting pan, which you can then use to baste the bird if cooking in the oven.

The romesco sauce is the perfect accompaniment to the grilled chicken. It’s super flavourful, incredibly quick and easy to make (especially if you’re in a pinch), and requires only 6 readily available ingredients – 5 if you don’t count dried herbs. Despite its simplicity, it will impress and have family and guests asking for more. 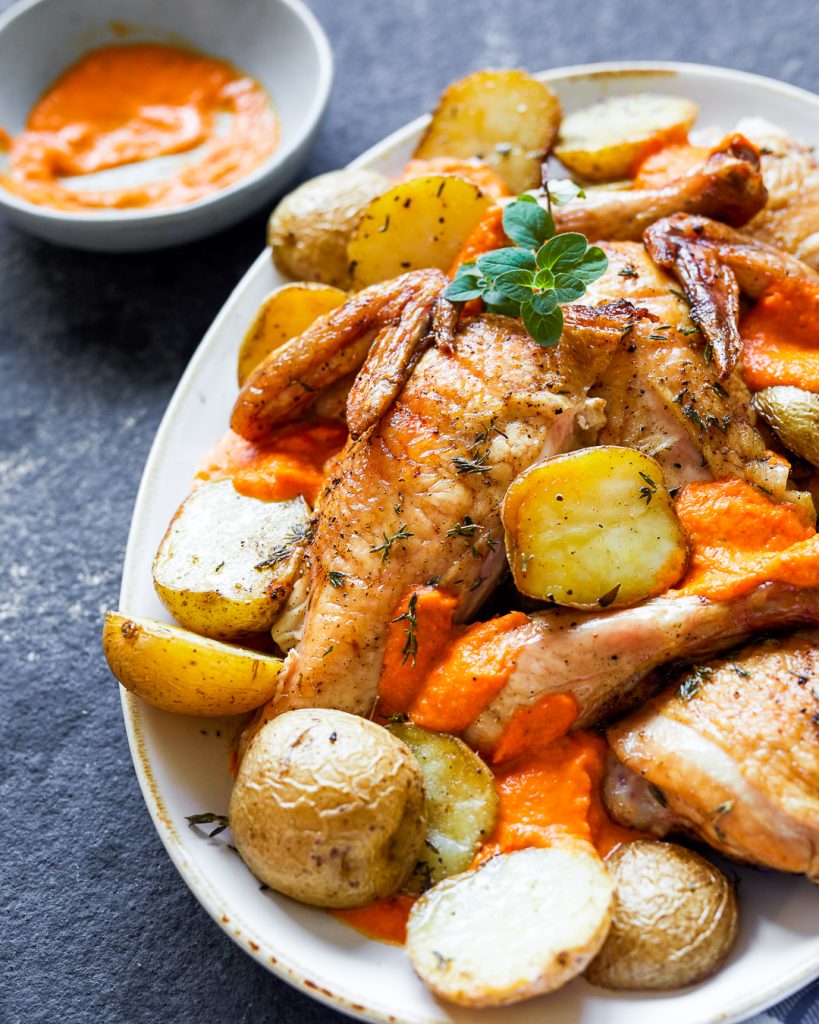 Traditionally, romesco sauce is made with tomatoes and almonds. Personally, I find it just as delicious without and often omit both of these ingredients. It may not be “traditional” or “authentic” but it tastes good to me and my family!

I’ve actually shared the romesco sauce recipe before. I love it with roasted sausages because as the sausages cook, they drip their delicious juices down onto the red peppers and onions and add a tremendous amount of flavour to the finished sauce.

Here, I decided to pair the romesco with grilled chicken and made everything on my Traeger grill. The beauty of the Traeger is that it works very similar to a convection oven in that it uses indirect heat to cook food. This means that just about anything that can be cooked in an oven can be cooked on a Traeger. The difference is that the Traeger uses 100% all-natural wood pellets, which adds a delicious wood-fired flavour. 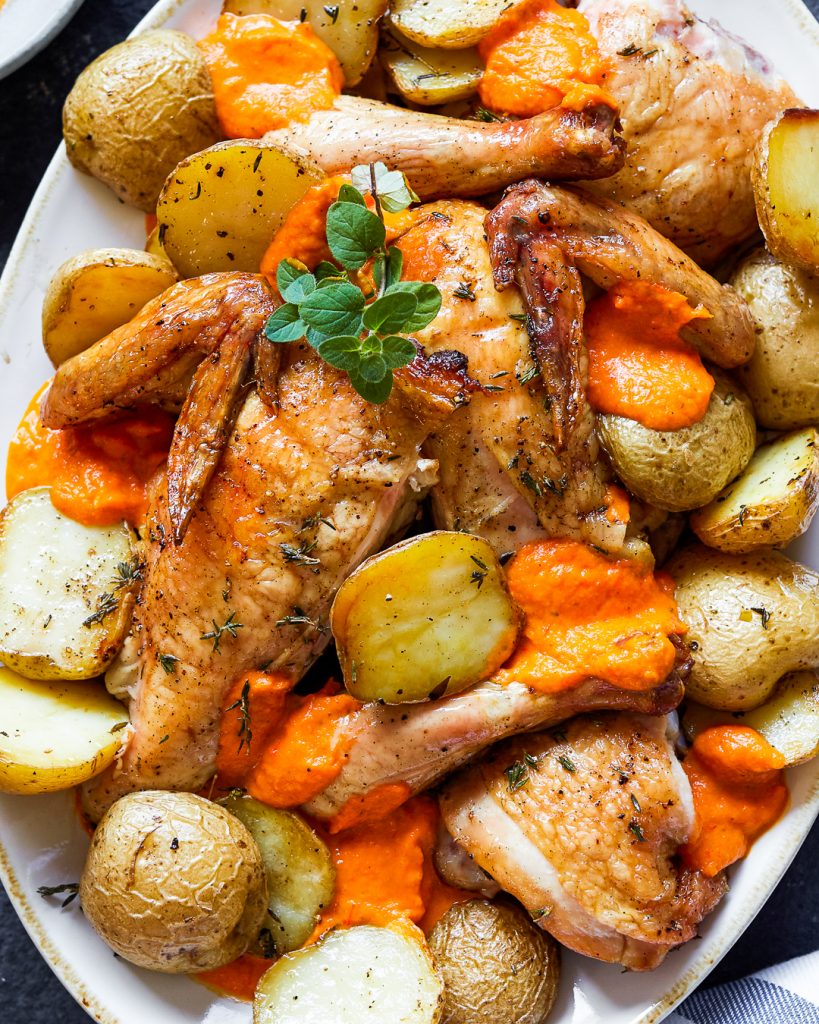 If you have a conventional grill, you should cook the chicken and vegetables over indirect heat. If cooking in the oven, follow the exact same instructions, times and temperatures. As mentioned, the Traeger works just like an oven so things don’t change.

I should also mention that the romesco sauce can also be frozen for up to 6 months. Assuming, of course, you have leftovers to freeze. Chances are it will all be gobbled up. Simply store it in a sealable mason jar (with some head room to account for expanding frozen liquids) and allow to defrost at room temperature or in the fridge before serving. I don’t know about you but I’m itching for the moment red bell peppers go on sale so that I can make a giant batch of Romesco for the winter months.

To round out the dinner and complete the meal, I also grilled some baby potatoes and served the chicken romesco with a side salad that I threw together while everything cooked. Thank goodness for this little bit of beautiful weather we’re getting in Toronto at the moment because cooking outside was exactly what I needed! 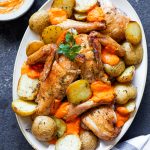 This Whole30 Grilled Chicken Romesco is easy enough to make on a weekday but fancy enough to serve at a dinner party. Did I mention it's Whole30 friendly?!

Although each part of the recipe is written out individually, they should be put into the oven to cook at the same time. 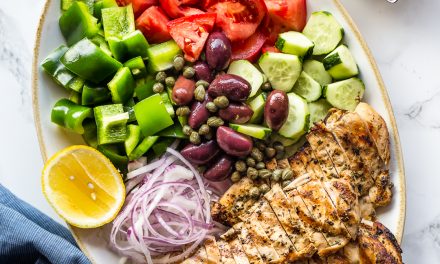 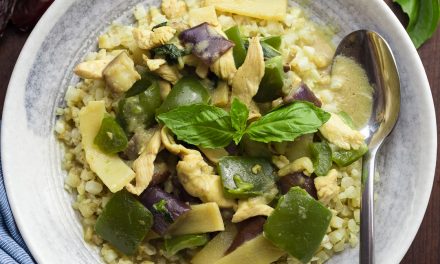 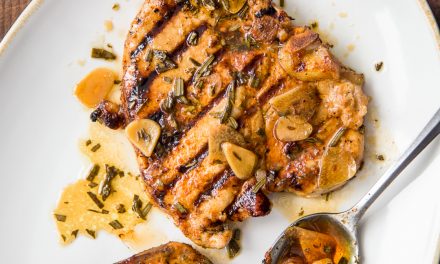 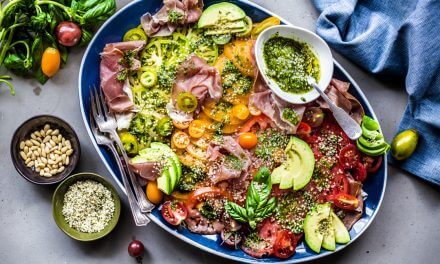