I can’t stop making this Bootleg Bolognese. This is a huge deal for me because, normally, I firmly oppose the purchase and use of jarred marinara. I just don’t like the way most of them taste, they’re usually made with sugar, alcohol or other weird ingredients, and it’s much cheaper to make it from scratch. It’s also pretty easy to make an incredible meat sauce from scratch, as is the case with this Bolognese recipe. 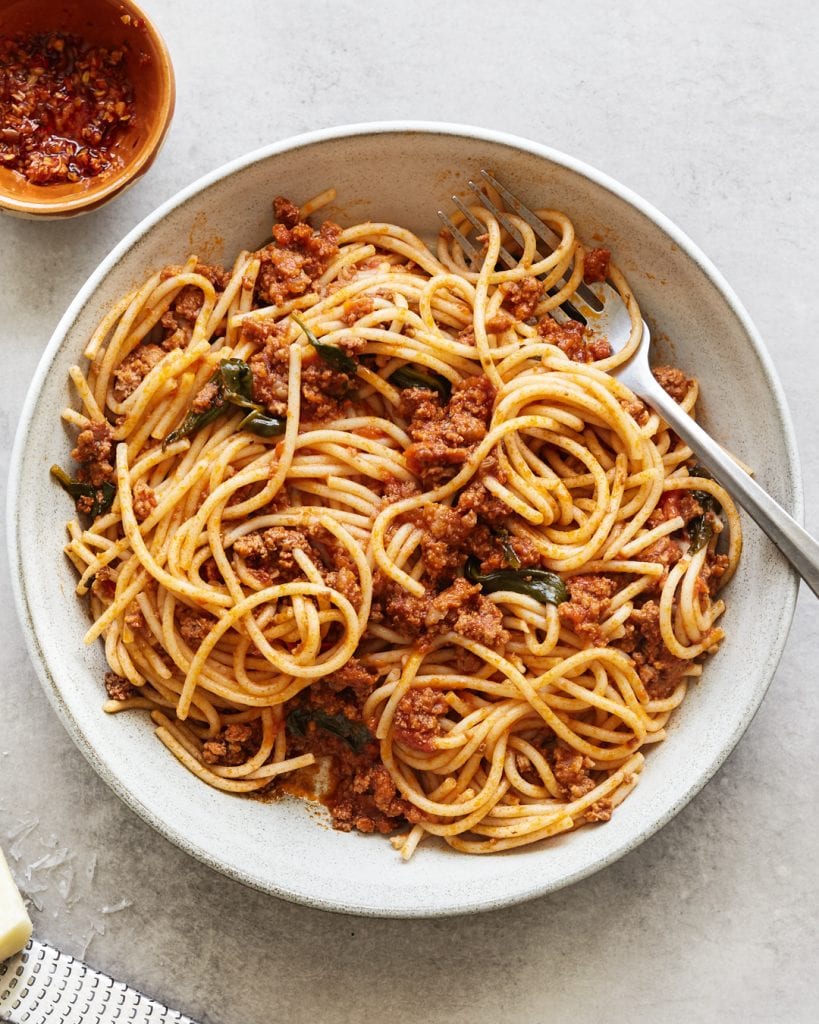 However, in the short time that I’ve been in Miami (for those who are unaware, I am currently residing in Miami for a few months), I have come to discover the extraordinary availability of Rao’s marinara sauce. Not only is this Rao’s stuff delicious and made with Whole30 compliant ingredients, it’s also quite reasonably priced at my local Costco, where I buy two 28-ounce jars for under $11.

Don’t get me wrong, Rao’s is available in Toronto, but it can cost upwards of $13 for a regular sized jar. As much as I now love the stuff, that’s just too rich for my blood, especially considering how easy and cheap it is to make a delicious red sauce from scratch. So, I rarely make this Bootleg Bolognese and instead resort to cooking everything from scratch. But, if you find yourself in a pinch and desperately need jarred marinara, I highly recommend Rao’s.

I should mention that one thing I like to do is sneak some spinach into the Bolognese. It’s a great way to fortify the dish with some veggies and nutrients, especially if you’ve got picky eaters. You can barely taste the spinach and if anyone asks, just tell them it’s basil!

For serving, I truly love Jovial brown rice pasta and can’t recommend it enough. No, this pasta is neither Paleo nor Whole30 compliant, but as far as pastas go, it’s a great option! It’s gluten-free and tastes just like the real deal. In a blind taste test, I honestly don’t think I would be able to tell that it was made from brown rice. I find that it leaves me feeling very satiated and I don’t experience the lethargy that normally comes after I eat wheat pasta.

If pasta isn’t on the menu or you want to keep things Whole30, then you can serve the Bolognese over cauliflower puree or with some zucchini noodles. I promise, it’s delicious with just about anything.

As easy as this recipe is, there are a few things that make sure it tastes as delicious as possible. 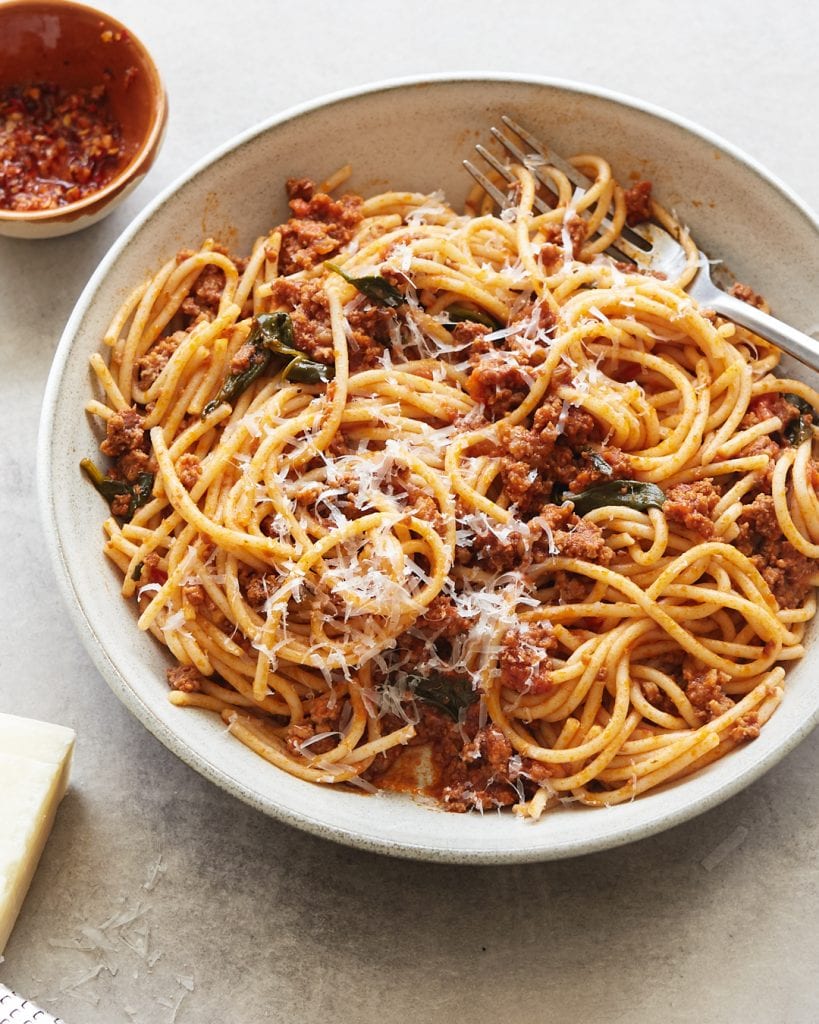 First and foremost, it’s important to get a good crust on the meat. Not only does this add flavour to the beef, but it also develops something called a fond (culinary term for those brown bits that sometimes form on the bottom of your pan). The fond is an integral part of braising and adds a depth of flavour to the sauce.

The best technique I’ve come across for browning beef is courtesy of Bon Apetit magazine. In their Lasagna issue, which I think came out in 2018, the food editors advised browning the beef in meatball shapes. This ingenious hack not only allows you to fit more meat in the pan, but it also results in a much deeper crust because the pockets of space between the meat in the pan allow for steam to evaporate. Browning the meat in meatball shape also makes it much easier to flip the beef and, in some recipes, transfer it from the pan to a bowl.

I find it equally important to pat the ground meat dry with paper towel before browning it. Surface moisture is the devil’s playground (I don’t know what that means but I’ve come to like it so I’ll continue saying it), and if your meat is wet it won’t brown as nicely. Instead, it will just cause steam, which is not what we want here.

Cook it Low and Slow

Look, there’s nothing stopping you from cooking the beef in the sauce for, like, 10 minutes and calling it a day. But you’re doing yourself a big disservice if you don’t let it cook for at least an hour.

Ground beef is usually made from tougher cuts like shoulder, which requires time for the intramuscular fibers to break down. Cooking the meat sauce on a low heat for a bit of time will not only soften the meat, but it will also allow for the flavours to develop and come together. 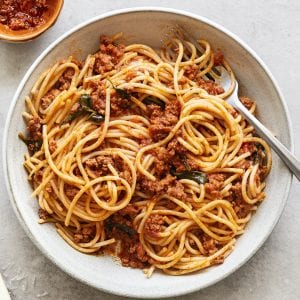 This Bootleg Bolognese is as easy as it gets and tastes just as good as from-scratch versions. Try it with some gluten-free pasta for a weeknight dinner
Print Recipe Pin Recipe
Prep Time 5 mins
Cook Time 1 hr
Total Time 1 hr 5 mins
Course Dinner
Cuisine Italian

So easy, so delicious! I used Raos arribiata sauce in mine. Cooking the meat to develop the crust is KEY. I didn’t have fresh spinach, but I used frozen and it was fine. Thank you for this easy delicious recipe!

So easy and so delicious! I used Rao’s sensitive sauce (without onion or garlic) and added a little oregano with the sauce. It was amazing!

Love that you made some tweaks to suit you! That’s what it’s all about!