Crispy, crunchy, juicy Coconut Shrimp with only two ingredients? Take all my money! OK, maybe not ALL my money because I need a couple of bucks to make the salad and sesame-ginger vinaigrette to serve the shrimp over.

I don’t know about you but I’ve long loved the combination of coconut and shrimp. Each is great individually, but put them together and I get really excited. The subtle sweetness from the coconut pairs really nicely with the delicate flavour of the shrimp. When gently fried until golden brown, the coconut gets crispy and develops a nutty flavour that takes things to the next level. Then again, I know there are more than a few of you who can’t stand the sight of either coconut or shrimp, so maybe skip this recipe altogether if that’s the case? 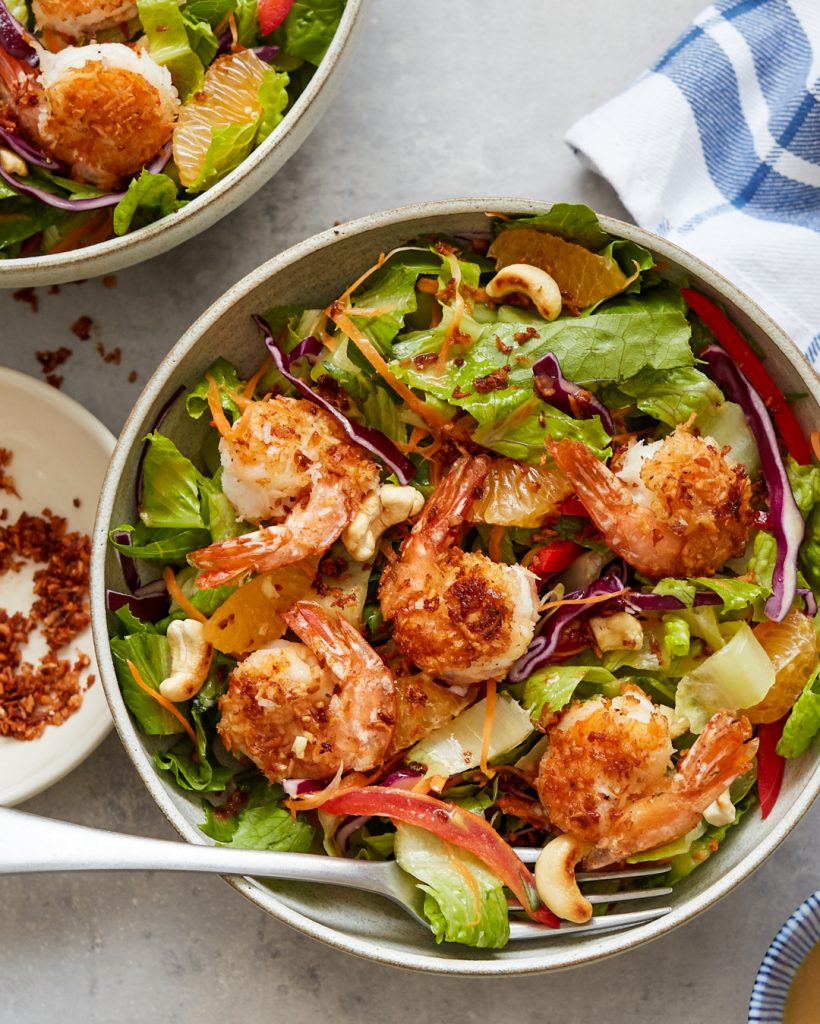 Most recipes for coconut shrimp involve dredging the shrimp in flour before coating it in a flour-based batter. The battered shrimp are then dipped in coconut and deep-fried in a neutral-flavoured oil with a high-smoking point, such as canola or peanut. There’s no denying that this process results in a supremely crispy, juicy and delicious finished product. Alas, it’s not exactly healthy.

It can, however, be made healthyish through a few clever paleo substitutions. That’s a story for another time (same place though – this blog) because as of late, time has been of the essence for me and I’ve found myself looking for more and more shortcuts in the kitchen. I thought to myself, I wonder if I could just coat the shrimp in some shredded coconut and call it a day. Turns out, I can and so can you!

The coconut doesn’t stick “perfectly” to the shrimp as it gets shallow-fried in a skillet and some of the shreds will inevitably fall off. But, with a firm pressing of the hands, enough of the coconut clings on to give you a nice crust on the shrimp. And, almost like a consolation prize, any of the coconut shreds that do fall off, get toasted in the oil and can be used as a garnish for the salad or anything else you want to serve the coconut shrimp with. So, be sure to keep any of those golden brown bits for later as you fry the shrimp. 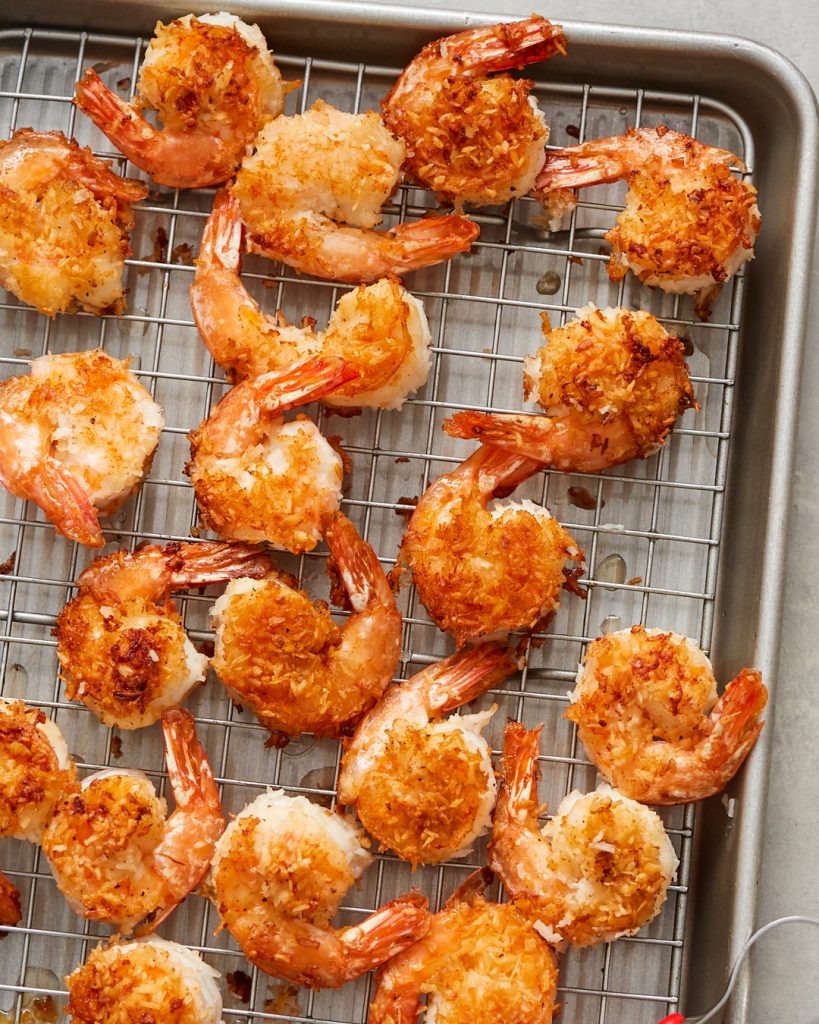 Speaking of frying, I like to use coconut oil here. It has a high smoking point, but that isn’t all too important since you’re only cooking the shrimp at medium heat. The real reason I like it is because the flavour echoes the shredded coconut. If you don’t have coconut oil, you can substitute avocado oil or extra virgin olive oil. Keep in mind that the former is neutral in flavour and colour and the latter will impart a bit of flavour and colour.

The salad I serve the coconut shrimp with is an Asian-inspired one. You know those premade packages of salad you can find at the grocery store? Think of this as a homemade version that costs way less and tastes better.

Same goes for the Sesame-Ginger Vinaigrette, which is super easy to throw together and much healthier than anything store-bought. The secret ingredient? A bit of tahini paste (100% pure toasted sesame seed paste), which adds an extra pop of sesame flavour and acts as an emulsifier. 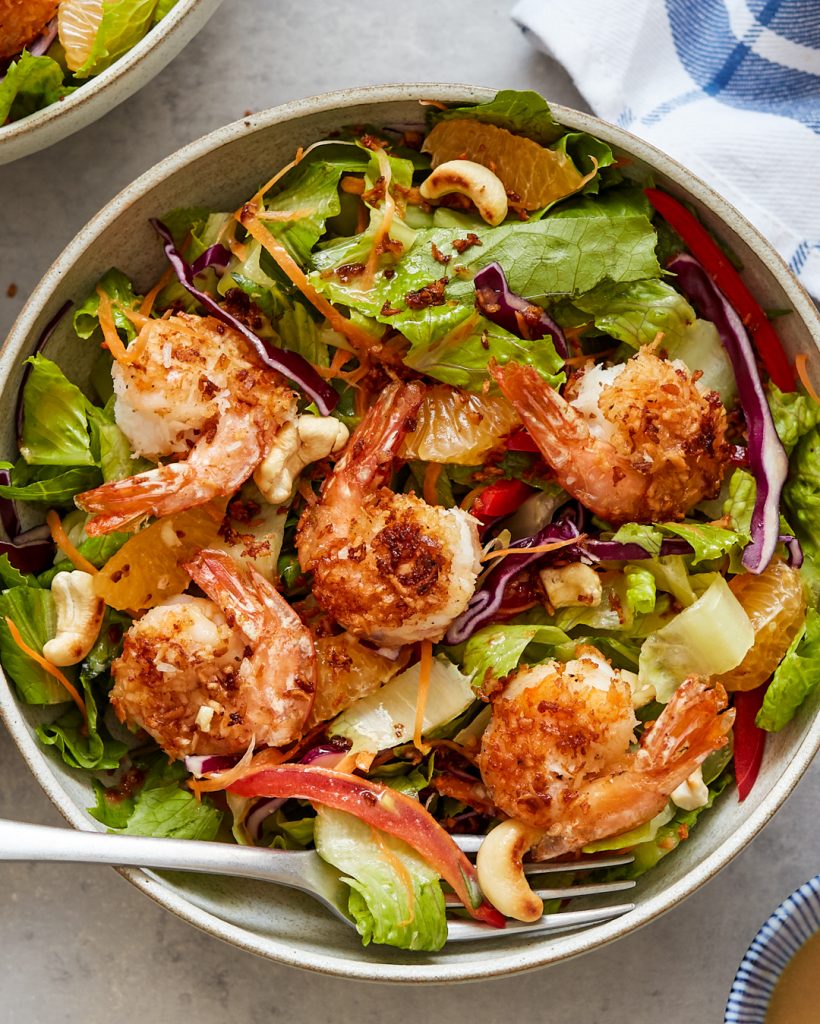 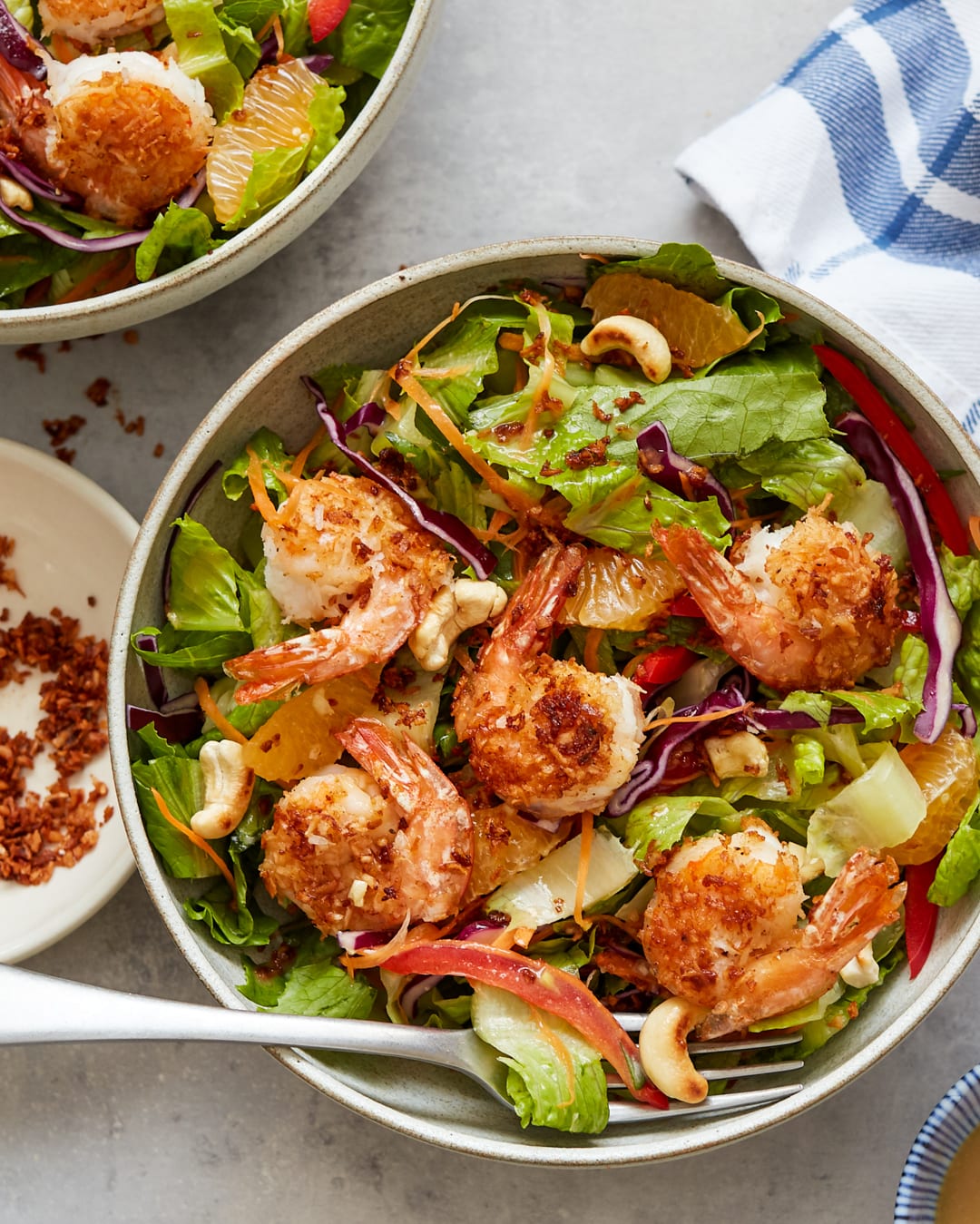 For the Sesame-Ginger Vinaigrette:

For the Coconut Shrimp:

For the Sesame-Ginger Vinaigrette:

For the Coconut Shrimp:

One reply on “Coconut Shrimp Salad with Sesame-Ginger Vinaigrette”