In August 2015, my girlfriend surprised me with a last-minute getaway to the Big Apple. That’s right, New York City! We had gone there together once before in the dead of winter. It was a very pleasant change to experience the city that never sleeps with the heat of the sun warming our every step. Like some people, the first thing we do when arriving at any destination is get lost. Quite literally, without so much as looking at a map or having a destination, we leave our front door and just walk. Which direction? Hard to say because it always changes. We’ve been traveling this way for the better part of 9 years now and we will continue to carry on in the tradition because it is the absolute best way to EXPLORE. Oftentimes, when you have a pre-set destination, you will be so intently focused on getting there that you will miss out on everything along the way. If you’re lucky, and pay attention to the signs, you might just stumble upon a hidden gem without even knowing it. It doesn’t happen often, but that just makes it ever more special when it does. So, one fateful night, as luck would have it, we stumbled upon one such hidden gem at The Wayfarer.

Actually, it’s not so hidden. Far from it in fact. It’s a big, two-storey, restaurant at the corner of 57th and 6th in Manhattan. It didn’t resonate with us so much from the outside. We typically seek out small, ethnic restaurants that serve up delicacies that are different from our respective cultural backgrounds. The Wayfarer was the antithesis of that. Fancy decor, big bar, designer lighting, contemporary, ‘American’, you know the type. Every city has a few of them. In Toronto, I would compare it to the Joey’s or Earl’s chains. The menu offered an odd mix of items like sushi rolls with spicy mayo and a raw bar alongside such staples as roast chicken, grilled steak, grilled fish, and a salad. Overall, I wasn’t excited to eat here but we were hungry, it was getting very late and they were open. Because we wanted to keep our late dinner relatively healthy and as Paleo as possible, we opted for the Kale Salad.

They arrived to the table on clean white plates, piled high in the centre. The colours weren’t particularly vibrant but that was because of the dim lighting in the restaurant. It looked like your run-of-the-mill kale salad – light on the dressing and garnished with a few other ingredients. We dug in. My word, it was delicious. It harmoniously combined finely chopped kale, hearts of palm, red onion, cherry tomatoes and candied nuts that were tossed in a citrusy vinaigrette and topped with crumbled blue cheese – or maybe it was Goat’s Cheese, I forget. The first thing that hit me were the citrus notes of the vinaigrette – floral, bright, crisp. Then came the brine of the hearts of palm, followed by the bitter spice of the onion and acid of the tomatoes. Everything was rounded off with the sweet crunch of the candied nuts and pungent cheese. Like I said, delicious!

Though I love salads, I am not a big fan of kale salads – especially raw kale salads. I happen to be in agreement with Mario Batali and a host of other gastronomical authorities that the dense, fibrous texture of kale is best when it’s broken down in a flavourful broth or liquid of sorts. Be it in a ragu, soup or rustic stew, Kale is just better hot and tender. I was thus very surprised when I took bite after bite of the Kale Salad at The Wayfarer until it had all disappeared from the plate.

I stopped to ponder how this Kale Salad differed from all of the other restaurants that are serving up nearly identical dishes that left me saddened at the deplorable state of kale in North America. Not to mention my own attempts at kale salads, which were equally depressing. What? You’ve never made a boring salad?

Back to the Wayfarer. Was it the dressing? Surely the citrusy, sweet vinaigrette must be the reason. Nope, not it! It was a standard dressing that could be applied to just about any salad without altering the taste or texture of the kale.

Was it the accompanying ingredients? It must be the bitterness of the diced red onion, the juicy tartness of the slightly unripened cherry tomatoes and the brininess of the hearts of palm, all of which were neutralized by the pungent cheese crumbled overtop. Though I’m sure these played a significant role in the overall balance and composition of the salad, I don’t think they could have transformed the texture of the raw kale enough to win me over.

I was puzzled. Frustrated in fact. Looking down at my empty plate, I tried so hard to come to grips with why I loved this salad so much. And there, sitting right under my nose, the answer stared me dead in the face, mocking me. A tiny, finely shredded leaf of the kale sat along the outer rim of the plate. I hadn’t spotted it on the peripheries and so it avoided my fork. In the void that was now the empty plate, I was able to notice and appreciate just how finely chopped the kale was. When it was part of the larger pile its delicacy was indiscernible. It was at that moment that I realized that the reason I didn’t take so well to other kale salads was because of how roughly chopped they always were. They always left my jaw tired and aching from all of the chewing.  The secret must be in the way the chef broke down the kale before tossing it together with all of the other ingredients. Eureka!

When we returned home to Toronto, the first thing I did was go to the market and bought up all of the ingredients to make the salad. But, I didn’t want to just steal the recipe. After all, it wasn’t mine to take credit for and I wanted to put my own Paleo spin on it, which meant I had to eliminate the dairy and find a suitable textural replacement. I also wanted it to be a bit more filling than The Wayfarer’s version so that it could be served as a main course, if so desired. My version welcomes the addition of crispy bacon and a perfectly medium-boiled egg that has been cooked for exactly 7 minutes. Together, they give something for the citrus of the dressing to cut through.

Like me, you could stick to the fundamentals of The Wayfarer and add whatever you think would go well based on the season and your budget. Regardless of what you put in your version, the secret to recreating The Wayfarer Kale salad lies in the way you cut the Kale!

Give it a go and let me know what you think in the comment box below! 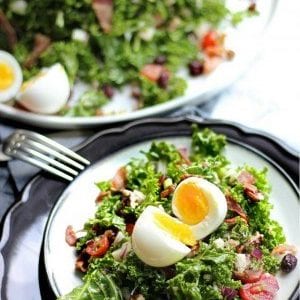