This is my Mama’s Chicken Soup (AKA Jewish Penicillin). It is the best chicken soup in the entire world. It can and will cure any ailment under the sun, including a broken heart. This isn’t up for debate. This is fact. It is science. It is Math. 1+1= Mama’s Chicken Soup! Are we clear? 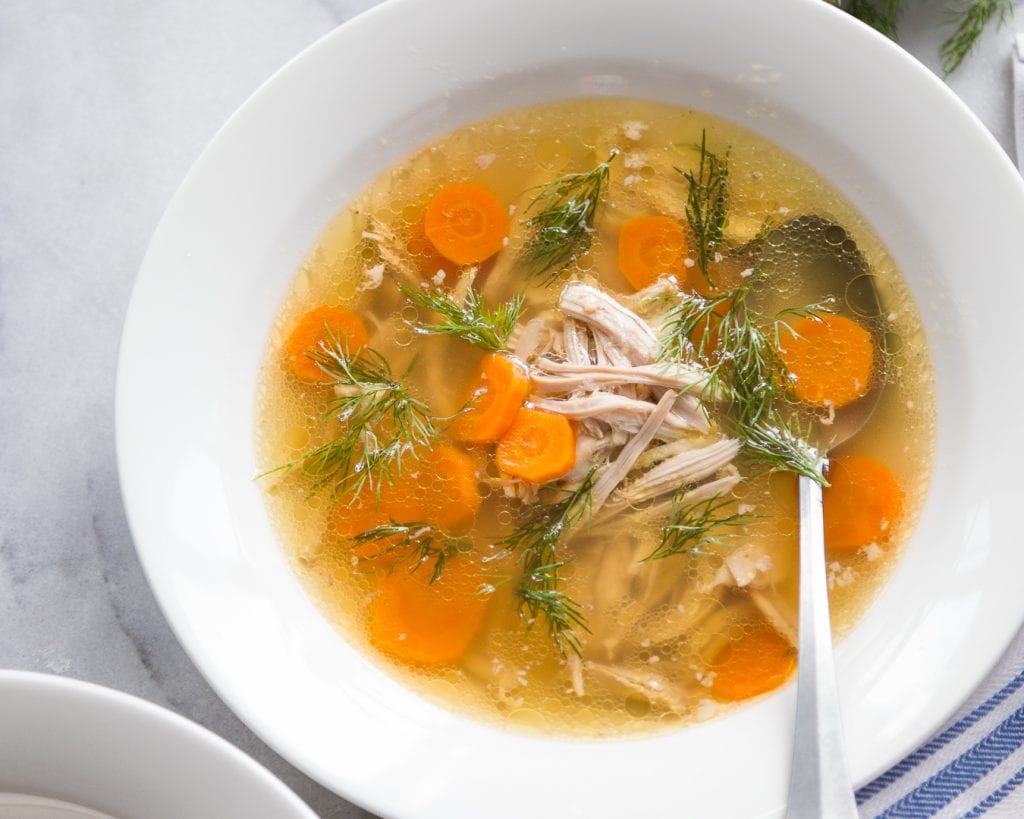 Growing up, my mother made Chicken Soup at least once a week. We ate it so often that at one point I never wanted to see it again. In addition to meeting her weekly Chicken Soup quota, she also made it (and continues to do so) on every single holiday – Jewish or otherwise. I would know it’s a holiday when I saw that she used the Chicken Soup as a base to make her Matzo Ball soup (something I will never get tired of!).

The recipe I’m sharing below is a codified version of something that is intangible. Chicken Soup, my Mama’s included, is an organic, living thing. It changes a little bit every time and doesn’t need to be made by following any specific measurements.

Chicken Soup is something you can feel your way through and improvisation is a part of the process. It is the Jazz music of the culinary world.

Of course, this is not something that comes easily to everyone. It takes practice and a great deal of trial and error. I have probably tried to recreate my Mama’s Chicken Soup no less than 2 dozen times and it still doesn’t hold a candle to hers. What can I say? She has that touch!

But, that shouldn’t stop anyone, myself included, from trying! I’m happy to say that with the below recipe, you can come very close to tasting a big part of my childhood.

But you might need a few of Mama’s Chicken Soup pointers to help you along the way:

You don’t have to use raw chicken quarters. You can use a roasted chicken carcass. Roasted bones have a concentrated flavour that gets released into the broth as it slowly cooks. It’s also a great way to reduce waste!

Likewise, using whole, fresh, beautiful produce to make the stock is a waste of money. Instead, you should be using vegetable scraps saved from other recipes you make throughout the week. I keep a ‘stock bag’ in the freezer for precisely this purpose. I continuously add to it every time I peel an onion or carrot, trim celery or have odd cloves of garlic.

However, it is virtually impossible for me to quantify carrot trimmings and onion peels. It’s also very hard for me to explain how to cook without a recipe.

Therefore, I recommend sticking to the ingredients and measurements below so that you have a reference point. 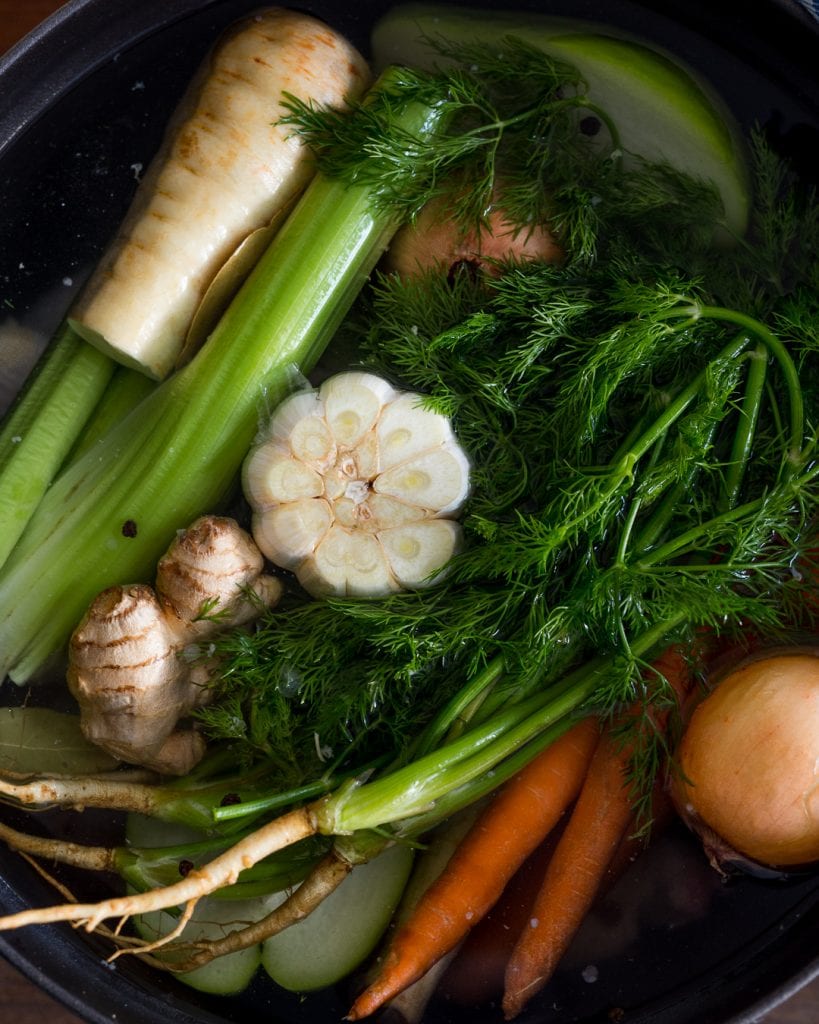 My Mama’s Chicken Soup is, for all intents and purposes, a recipe for making stock. The only difference is that the we usually treat the stock as a meal in itself.

When making with raw chicken, we shred the poached meat and eat it with the flavourful broth.

If using roasted bones, we use the liquid as stock for other things.

You can use it however you please. It will undoubtedly make everything taste better.

If you are going to use raw chicken parts, such as legs and thighs, or even an entire bird, I recommend purchasing Kosher or Halal. Unlike non-religious butchering practices, one of the requirements in both Kosher and Halal laws is for the blood to be drained from the animal.

Religious considerations aside, this will result in a less cloudy stock. Not to mention the fact that the animals must be slaughtered in a humane way or the meat is considered inedible.

If, however, you are using the bones or carcass of a roasted bird, this is less of a concern since most of the blood will have been cooked and/or drained after carving. On the other hand, many roasted chickens are first seasoned or marinated in any number of spices, etc., and these will inevitably colour your stock.

I once made stock from the remains of my Cajun Roast Chicken. While incredibly delicious, the stock was noticeably darker and more red than usual.

A cloudy stock occurs when you do not skim the foam that rises to the surface of the water when boiling the meat. The foam is the result of solidified impurities in the meat.

Personally, I don’t get too fussy with how clear my soup/stock looks. I do my best to skim as much foam as possible but if there are flecks floating around, all the better, I say! More flavour!

But if you want a less cloudy finished product, you can try one of the following techniques: 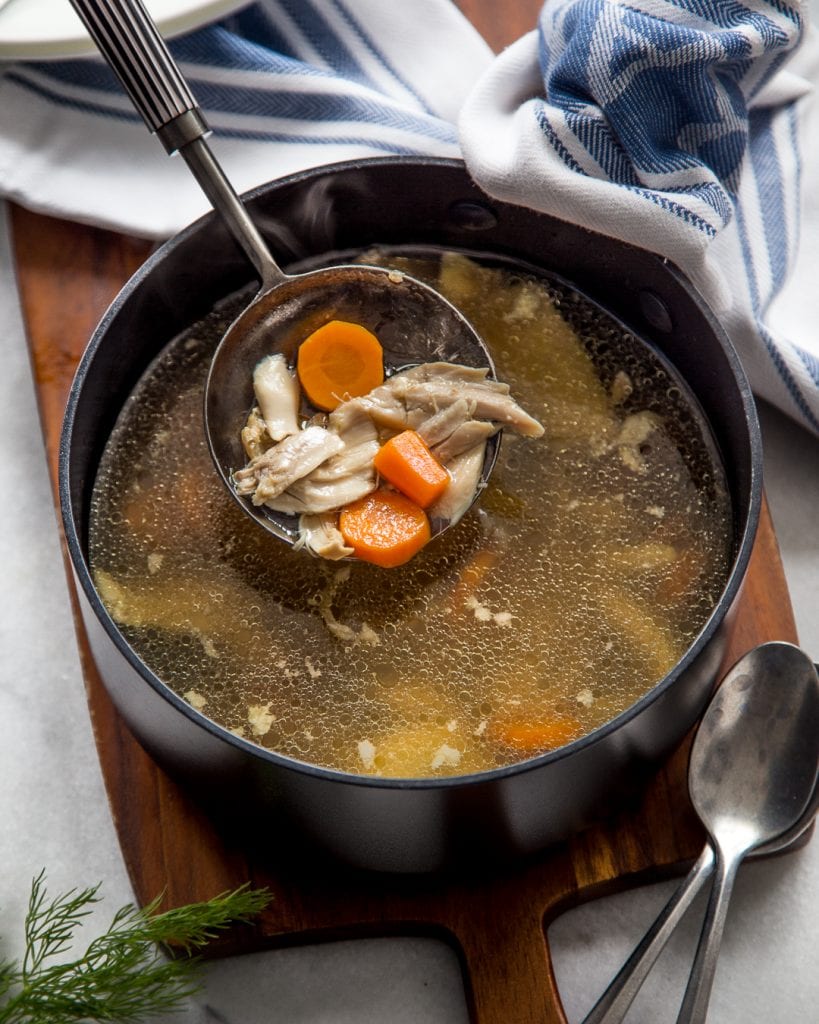 Although you should skim any foam that rises to the surface, you should definitely leave the fat globules. Those beautiful, shiny bubbles that dance across the surface of your soup are rendered chicken fat (AKA Schmaltz). This is the holy grail of Jewish delicacies and is pure, unadulterated flavour!

You will notice significantly more schmaltz when using raw chicken that is skin-on, since this is where most of the chicken fat is stored.

Thus, there is a case to be made for using raw chicken as opposed to roasted bones. 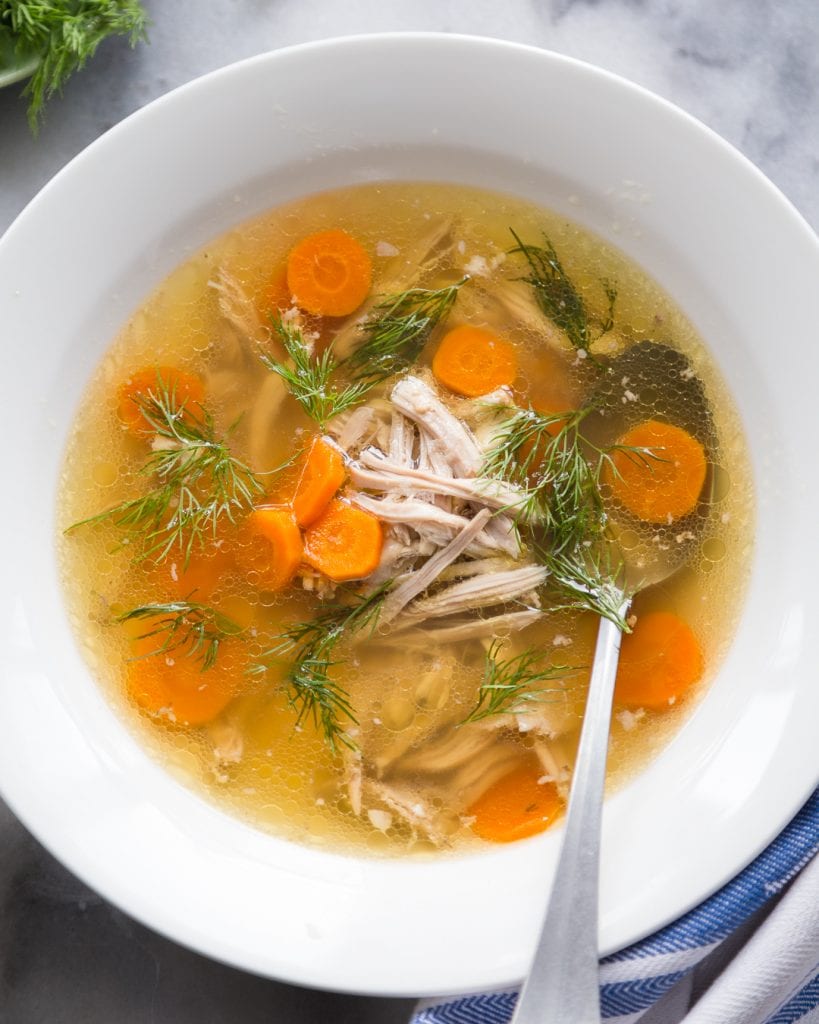 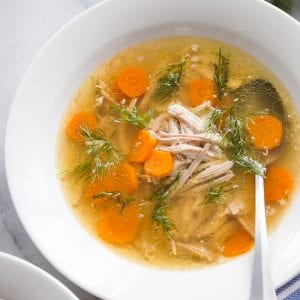 Can you cook this in the instant pot?

I suppose so, but no pressure cooking is required. The flavours need time to develop so speeding up the process will result in a less flavourful soup.

I love watching your stories. You are so funny and the music is great!!!

Would frozen chicken breasts work for this recipe? Thank you!

Frozen meat works, but your best bet is to use something bone-in, preferably dark meat (chicken legs) for maximum flavour and nutrition!

[…] other hand, I don’t have any scraps but have a fridge full of fresh produce, I’d likely make my Mama’s Chicken Soup. Though, here again, scraps can be […]

Is there any substitute for the chayote squash? I can’t find it anywhere!

If you can’t find it simply omit.

I only have a slow cooker. will this be okay? u think high low? time? haha love your stuff!

Should be great! I would cook on high for maybe 2-3 hours?

Can i make this in a slow cooker?

Used a very small chicken, whole, and my veggie scraps. It was perfect for a cold evening with most of us feeling under the weather.

Hello! So excited to make this recipe tonight for my sick boyfriend 🙂 About how many cups does this batch make? Thank you

If going by the recipe you will end up with around 5.5-6 quarts of broth.

This is a good basic recipe, but there are ways to improve it further:

1) For a richer, more gelatinous soup, use the back, neck, head, feet and (possibly) the wings of the chicken instead of the legs (thighs and drumsticks), which are better suited to frying, broiling and stewing anyway. Make sure to also use the gizzard and heart. In fact you can add extra chicken hearts, to the tune of 1/4-1/2 lb, to the soup for extra nutrition.

2) Instead of – or in addition to – the ginger, add one moderately hot pepper per 3 quarts of soup. Do *not* go for the hottest chile you can find, because this soup is all about flavour and a very hot chile would suppress all that flavour. Something with a value of 5,000 units or less on the Scoville scale would be ideal. Just one piece. It will add a bit of heat, but also an extra layer of flavour.

3) Stick a few cloves into the onion and grate some nutmeg on the chicken before adding them to the pot.

4) Consider using celeriac instead of celery, and root-parsley instead of the parsnip – that’s how this soup is made in Central Europe, where it comes from.

5) You can also add kohlrabi, Brussels sprouts and even a few small mild-flavoured button mushrooms to the vegetables. Even a few peas. (But only towards the end of the cooking time.)

These all sound like lovely additions! Thank you for them. But it’s not the way my mama made it and, therefore, would warrant a different title.

Halal or kosher chicken vs organic? Are there less hormones or additives in halal/kosher?

As far as I know halal/kosher has less to do with hormones and additives than the butchering process. But I’m not an expert. For the soup, I recommend halal or kosher because the chickens are drained of blood during slaughter, which means you usually have to skim less foam during cooking.

I think everyone in Seattle is making this soup this week! I went to two different stores and couldn’t find fresh dill! Will dry work ok?

The flavour will be a bit different but using dried dill is perfectly fine given the circumstances. A little goes a long way so don’t overdo it!

Everyone says their stuff is the best and I’m always dubious but, seriously, this stuff is THE BEST! I love this recipe, and my picky husband does, too. I’m using it as a base for all of my chicken soups in addition to eating it as is. Thank you!

🙂 so glad to hear you enjoyed!

[…] and cooked pasta to yours. For best results, I recommend using a very flavourful broth, such as my Mama’s Chicken Soup, or your favourite store-bought […]

[…] season some lamb chops and pan-fry until the entire house was filled with smoke. Along with my Mama’s Chicken Soup, pan-fried lamb chops are of the dishes I most associate with my […]

This soup is amazing!!!Thank you sooooooo much for sharing it with us….