These Paleo Grilled Short Ribs are an inspired version one of my absolute favourite Korean dishes, LA Galbi. They’re dead-simple, best prepared ahead of time and take only a few minutes to cook. In fact, thanks to the TFal OptiGrill Smart, they go from grill to plate even quicker because the OptiGrill cooks both sides at the same time! Not to mention the fact that it allows you to grill in the comfort of your kitchen, even in the winter!

Aside from some of the Tofu houses, most of the Korean restaurants serve an LA Galbi. Thin, cross-cut, marinated short ribs that are grilled to perfection, oftentimes right on the table. They’re often served with bowls of steamed white rice, leaves of romaine lettuce, slices of raw garlic, and plenty of banchan (an assortment of Korean side dishes and pickles that accompany every meal). 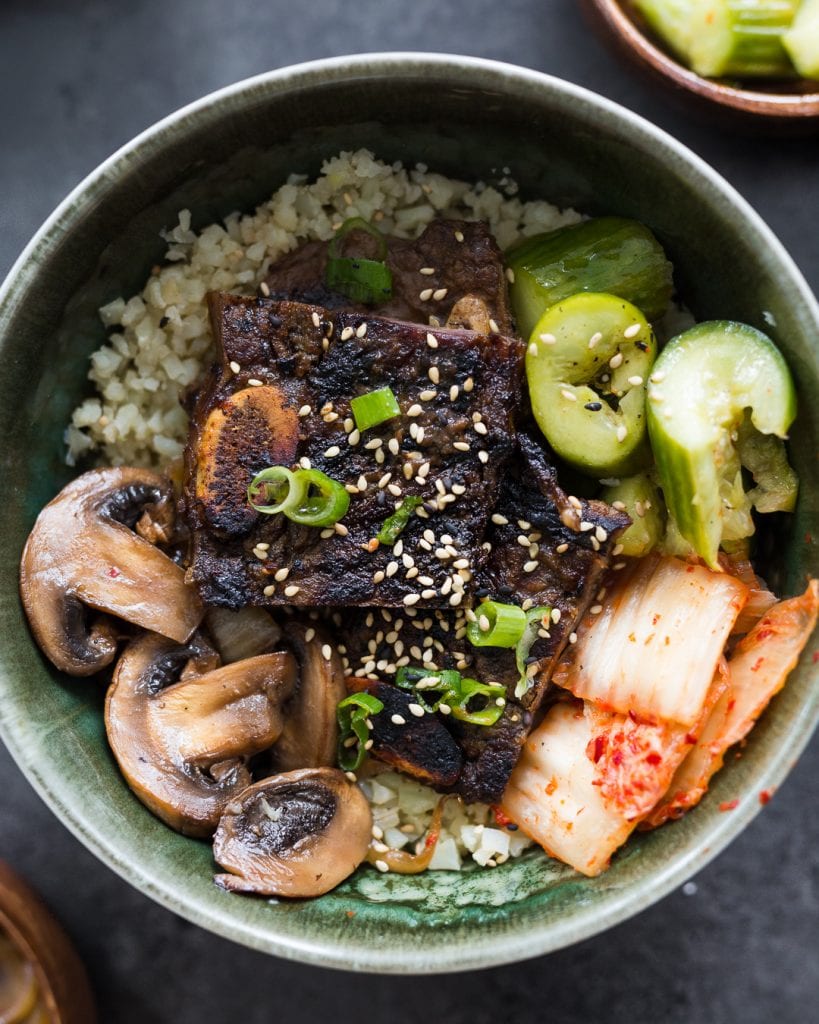 The word Galbi translates to ‘ribs’ in Korean and there are a variety of recipes that use this delicious cut of meat. Galbi jjim, for example, are braised, thick-cut short ribs that will knock your socks off. Aside: best galbi jjim in Toronto? Song Cooks at Yonge and Steeles, hands down!

I’ve come across a few theories that attempt to explain the origin of LA Galbi and one that seems quite likely is that the ‘LA’ prefix was added after Korean immigrants developed this specific cut of short ribs in Los Angeles. Unlike thicker, more traditional cuts of short rib, which run lateral to the bone, the LA Galbi are thinly sliced perpendicular to the bone for quick grilling. Luckily, this has since become a very popular cut of meat and can be found at a number of butcher shops and even big grocery stores.

Most, if not all, of the Korean Grilled Short Ribs recipes I’ve encountered contain copious amounts of sugar, alcohol, soy or other foods that don’t sit well with me personally. So, I set out to develop my own recipe that incorporated the same delicious flavours I’ve come to love in my favourite Korean spots in Toronto, but without the unnecessary lethargy that comes after indulging. 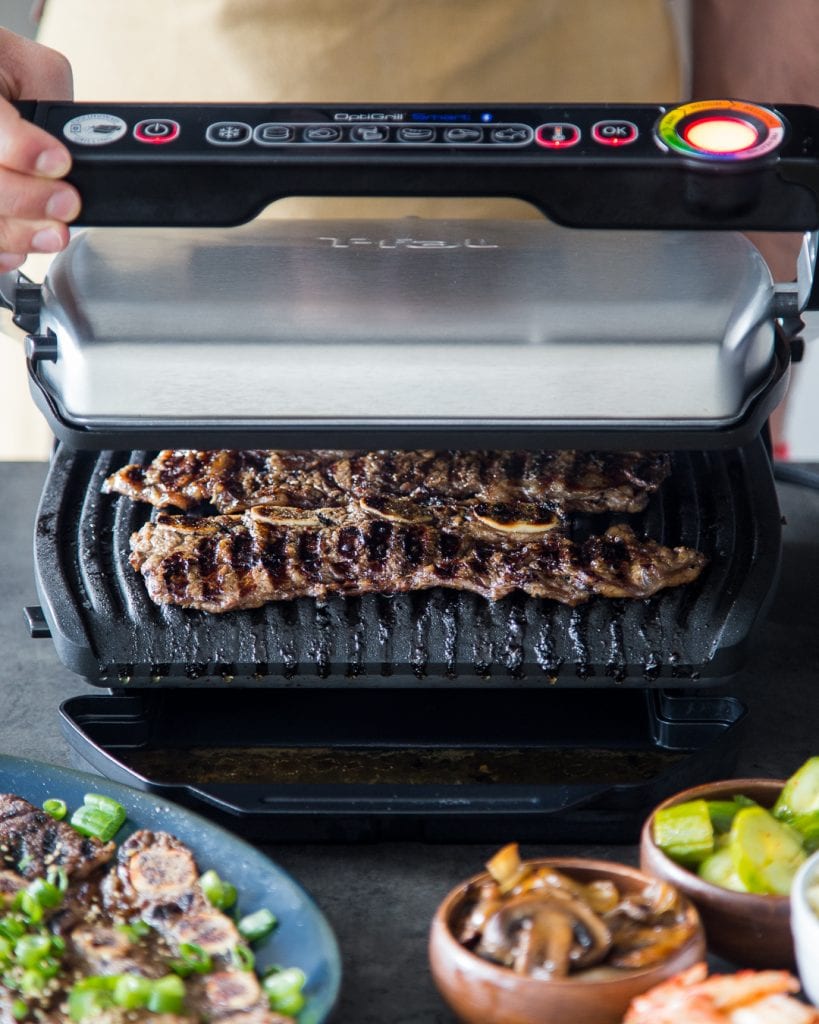 I should also note here that most Grilled Short Ribs recipes call for grated Asian or Bosc pears. These are excellent, delicious, healthy sources of sugars and I encourage you to experiment with these ingredients in your own cooking. However, I found them to be a bit too mild in sweetness and had a more consistent result with honey as the main sweetener in my marinade.

Though perhaps not as complex or nuanced in flavour as some of my favourite versions (it’s hard to beat meat marinated in soju), I’m very happy to say that these Paleo Grilled Short Ribs come very close to the “originals” (heavy quotations since LA Galbi seems to be a transplant itself). Dare I say, they’re even better than some of the less-than-amazing ones I’ve eaten over the years? Bold statement, I know!

I hope you enjoy this recipe for Paleo Grilled Short Ribs as much as I do! 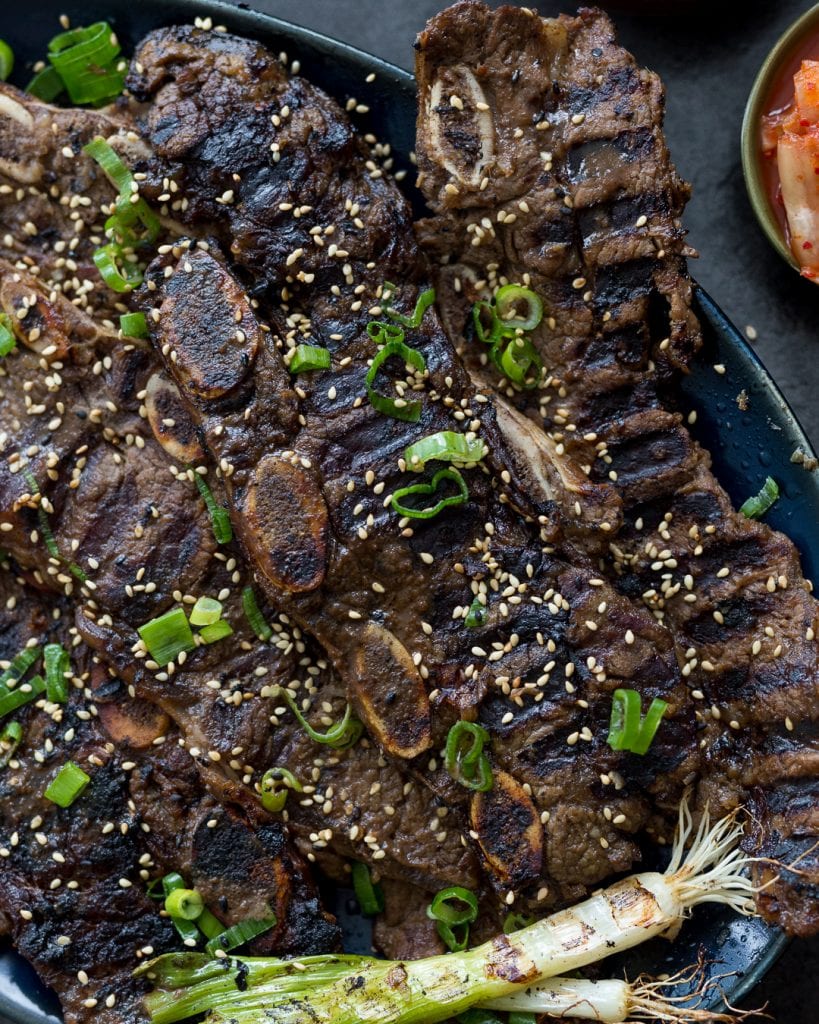 *This recipe was developed in partnership with TFal Canada. All opinions and thoughts expressed are the author’s alone. 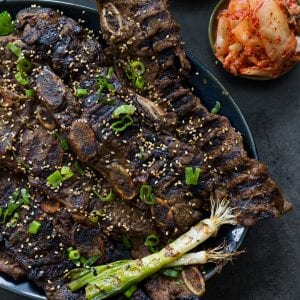 […] ribs as you would your favourite steak? This should actually come as no surprise to those who love LA Galbi, or Korean Grilled Short Ribs. After all, it’s the exact same cut of meat, only that it’s been […]