If you enjoyed my Paleo Orange Chicken, I have a feeling you’ll love this Paleo Sesame Chicken. It’s just as good, if not better, than some of my favourite take out spots in Toronto and much, much healthier.

It’s free of gluten, grains and refined sugar, but you’d never know it. The chicken gets nice and crispy before being tossed in a slightly sweet and sticky sesame sauce. It’s super easy to make, absolutely addictive, and requires only a handful of readily available ingredients. 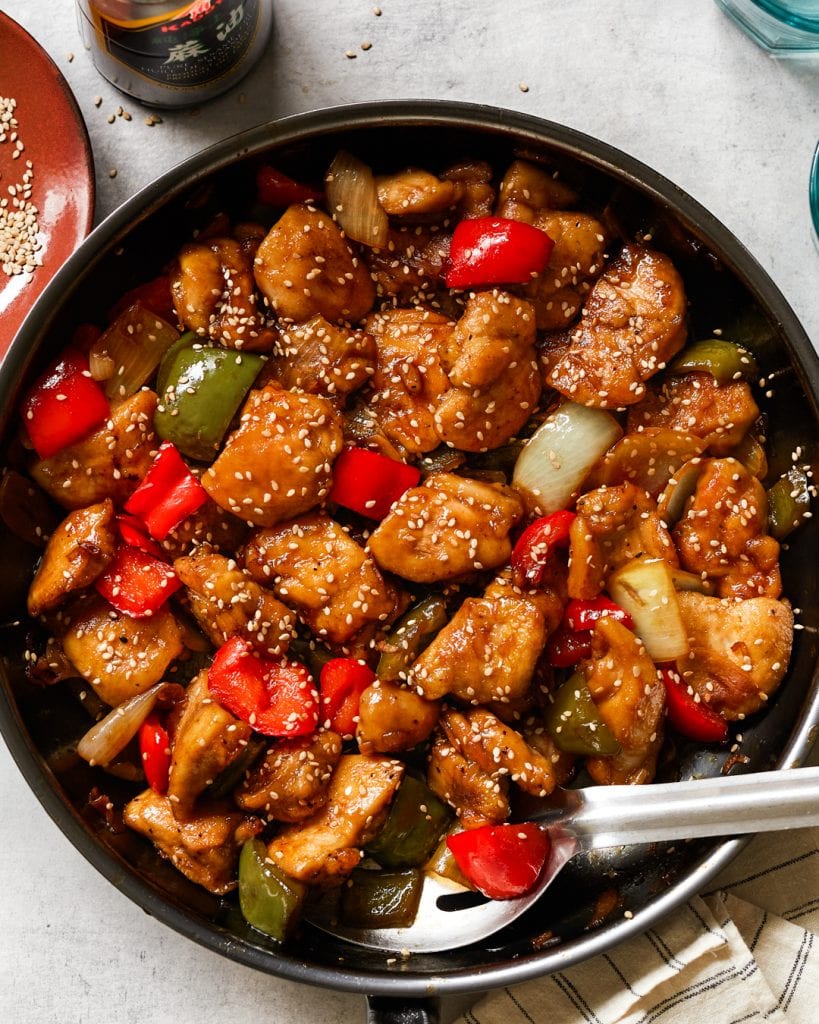 What You Need for Paleo Sesame Chicken

Personally, I’m a dark meat kinda guy. It’s juicier and more flavourful than white meat and is much harder to overcook. For stir-fries like this, I buy boneless, skinless chicken thighs to make my life easier. You can also substitute boneless, skinless chicken breast if that’s what you have or prefer. Either way, the measurements, ingredients and technique will work the same and your Paleo Sesame Chicken will come out delicious.

For flavour, colour and texture, I add diced green and red bell peppers in my Paleo Sesame Chicken. I like the sweetness, flavour and aroma they add to the dish. If you don’t have bell peppers and want to substitute a different vegetable, you can try thinly sliced carrots, celery or even bok choy. Any kind of low-moisture vegetable will work here.

This naturally grain-free alternative flour is a great replacement for the cornstarch that is more commonly used in many Asian-inspired recipes. Here, the arrowroot plays double duty. It’s first used to dredge the chicken, helping it develop a crispy crust. Once the fried chicken pieces are added to the sauce, the arrowroot starch will actually help to thicken it. 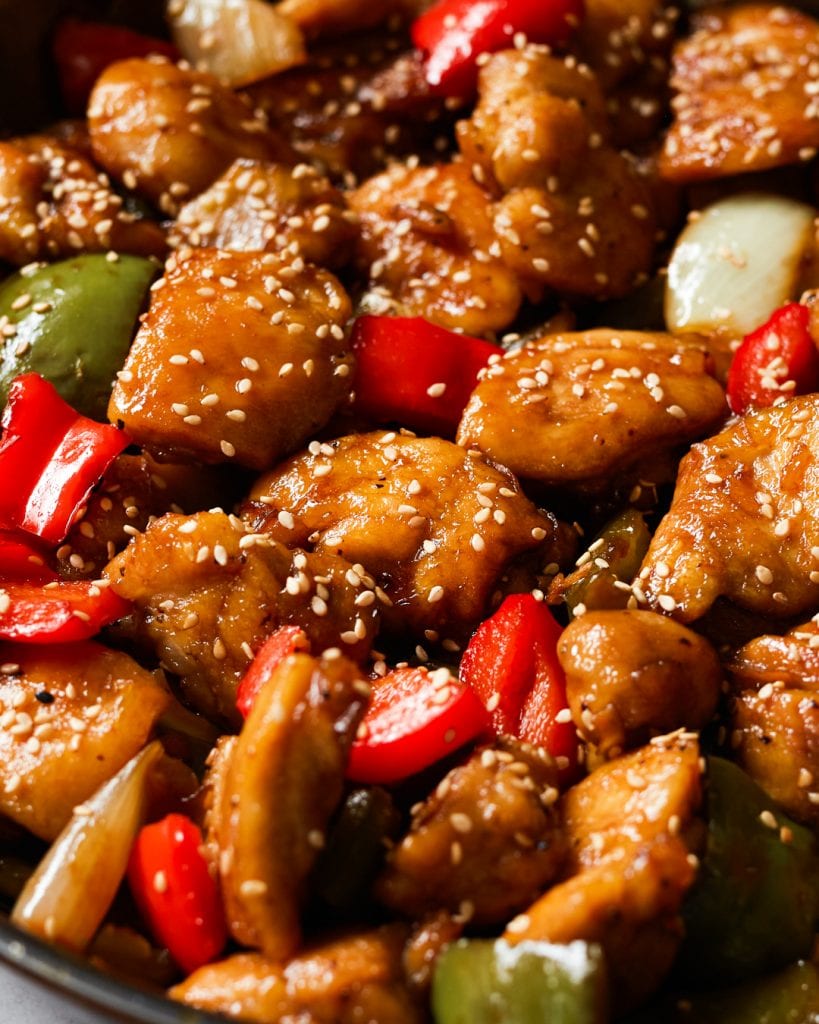 Using an acid like rice wine vinegar adds tang and balances the sweetness from the coconut aminos and honey. A little goes a long way so try not to overdo it or your Paleo Sesame Chicken will be a bit too sour. If you do accidentally add too much vinegar, you can try to balance it out with a touch more honey. 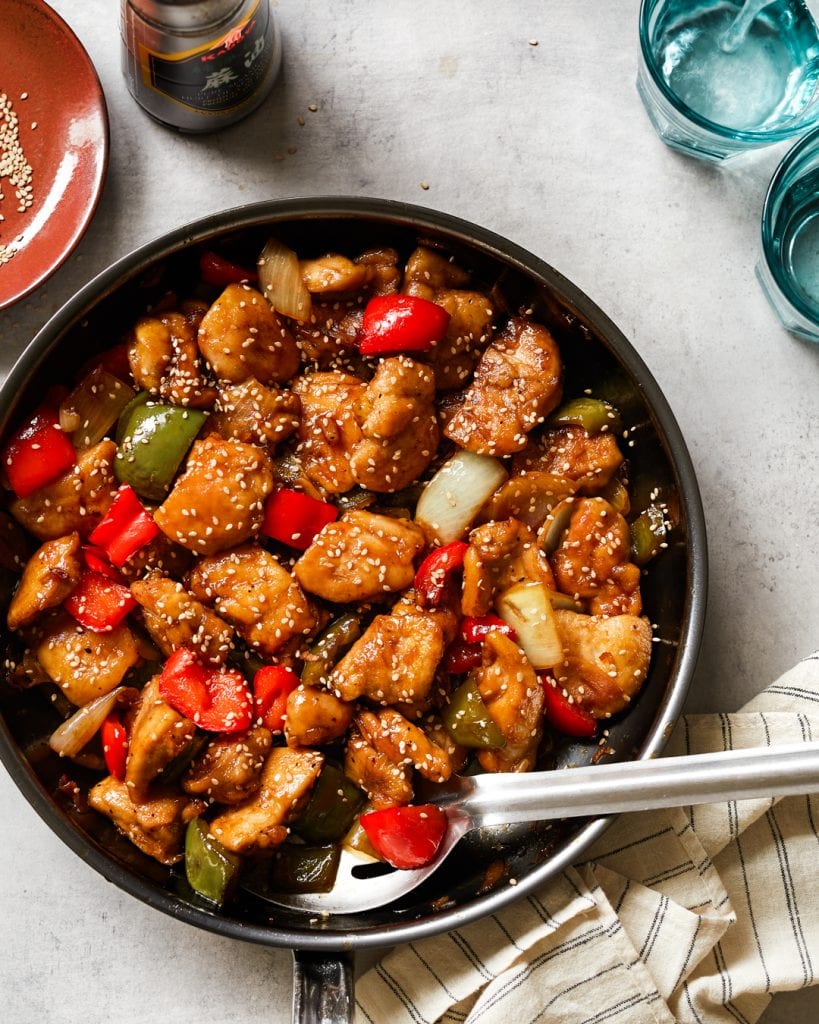 Honey sweetens the dish, balances the other flavours and also helps the sauce to reduce down to a syrupy consistency that helps it to stick to the chicken.

For a Whole30 version of this Paleo Sesame Chicken, omit the honey and increase the coconut aminos by an extra ½ of the called for amount. In other words, if the recipe calls for 1/3 cup coconut aminos, add around 2 extra tablespoons. Then take the extra bit of time to reduce the sauce so it thickens naturally.

Garnishing with some sesame seeds looks pretty, adds a bit of crunch and rounds out the whole Sesame Chicken story. 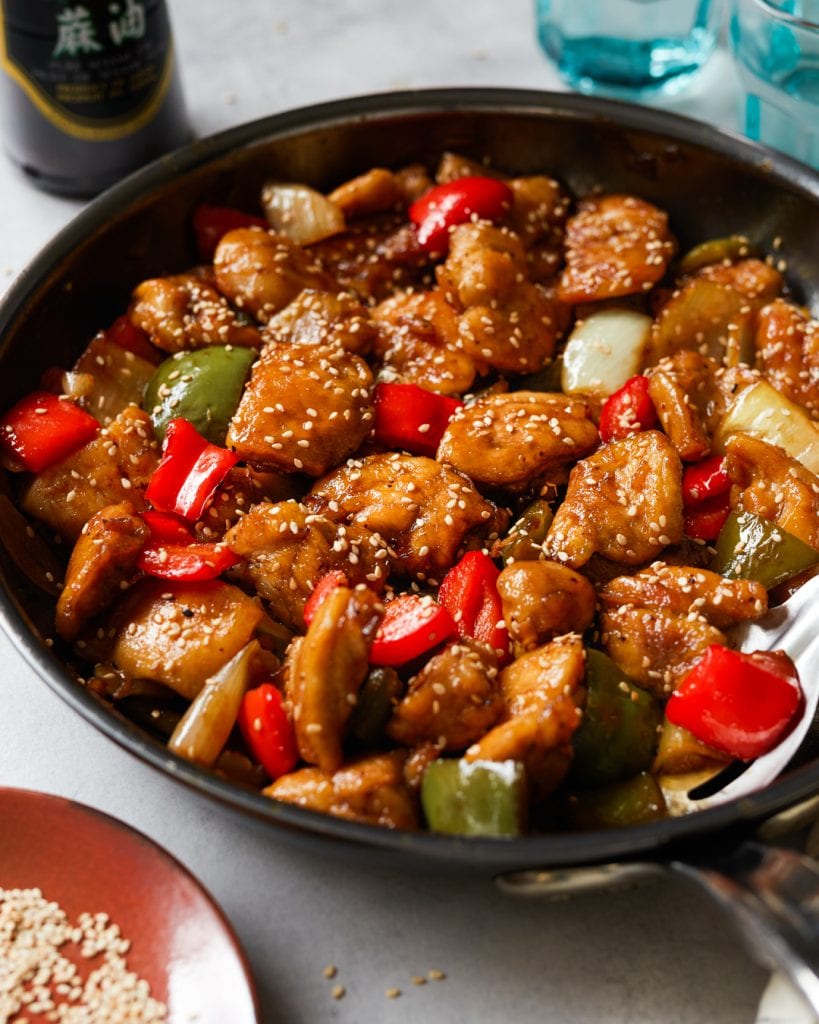 Do You Need a Wok?

It’s a question I’m often asked when it comes to making any kind of stir-fry or Asian dish.

Woks are great and I love them. Especially carbon-steel ones, like this beauty from Made In. Carbon-steel is a terrific conductor of heat, can handle very high temperatures, is naturally non-stick when well-seasoned and much lighter than cast-iron. But there’s a caveat to woks in general.

In my experience, stir-frying in a wok only really works well if you’re cooking on a gas range, where the flames of the burner can rise up along the sides of the wok and evenly distribute heat. For those of us who are limited to electric, induction or coil stove tops, woks are not nearly as effective. In fact, they will actually work against you because of their smaller bottoms and sloped walls, which decrease the part of the pan that comes into contact with the heating element.

So, unless you’re cooking on a gas range, I recommend using a large carbon-steel, cast-iron or stainless-steel fry pan or sauté pan. The increased surface area will allow you to cook the ingredients more evenly and at a higher heat. Plus, unlike non-stick pans, these materials can withstand higher temperatures and, in the case of carbon-steel and cast-iron, if they’re well-seasoned, they are virtually non-stick.

If using a stainless-steel pan, preheat the dry pan over medium heat for 5 minutes. Then raise the heat to medium-high and add the oil. Heat the oil until shimmering before cooking. This will help prevent food from sticking. 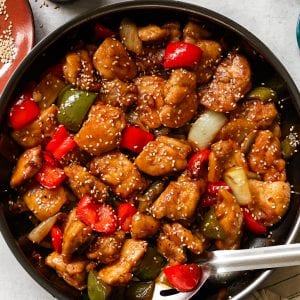 This was absolutely excellent! My husband loves sesame chicken and really enjoyed this healthier version. It was so nice to have Chinese and not feel pain and regret afterwards!! Fresh and delicious. Will be adding it to our regular rotation.

This recipe is fantastic! The flavors were better than takeout—also great that it doesn’t have all the fat, salt and sugar.