On paper, these potato latkes are Whole30 compliant, but they are undoubtedly a ‘food with no brakes’ for me so I try to enjoy them when the time is right. I encourage you to form your own opinion and figure out whether or not they’re something you’d like to incorporate into your Food Freedom or Whole30. 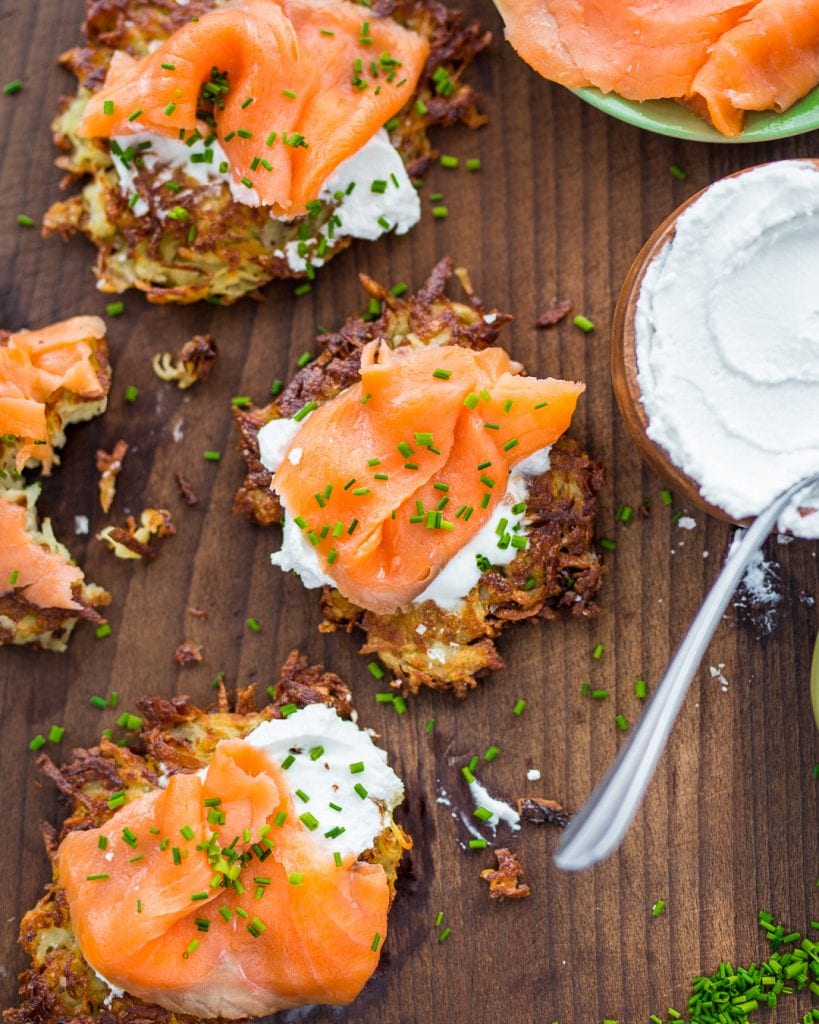 What are Potato Latkes?

Potato Latkes are a traditional Jewish delicacy, often called potato pancakes, most often consumed during Hannukah. If you ask me, these crispidy, crunchidy, golden and delicious pancakes can be eaten year round.

If you’ve never had traditional latkes before, they are similar (if not identical) to homemade hash browns. The usual suspects are grated potatoes, onions and eggs mixed together and formed into pancakes before being shallow-fried until golden brown and crispy on the outside and soft and juicy on the inside. As you can imagine, latkes are a delicacy my family and I look forward to every year.

Just about every family I know has their own way of making potato latkes. Some people like to add binders such as flour or matzo meal. Others get creative with the ingredients and choose to sneak in some grated zucchini or apple. And others still prefer the subtle flavourings of woodsy herbs, such as thyme and rosemary. A great alternative to white potatoes is to use sweet potato, yam or even rutabaga.

If going the potato route, it is very important to reserve the starch that settles at the bottom of the bowl after grating and squeezing the potatoes of excess moisture. If grating the potatoes in advance, you will want to place them in a large bowl of water to prevent them from turning brown. Just be sure to drain as much of the water as possible to ensure a crispy latke.

You can grate the potatoes and onions by hand, or use the grater attachment on a food processor. Both work equally well but the latter will save you a significant amount of time and energy. A food processor will also spare you the inevitable onslaught of tears that come from grating an onion by hand. Happy tears, of course. 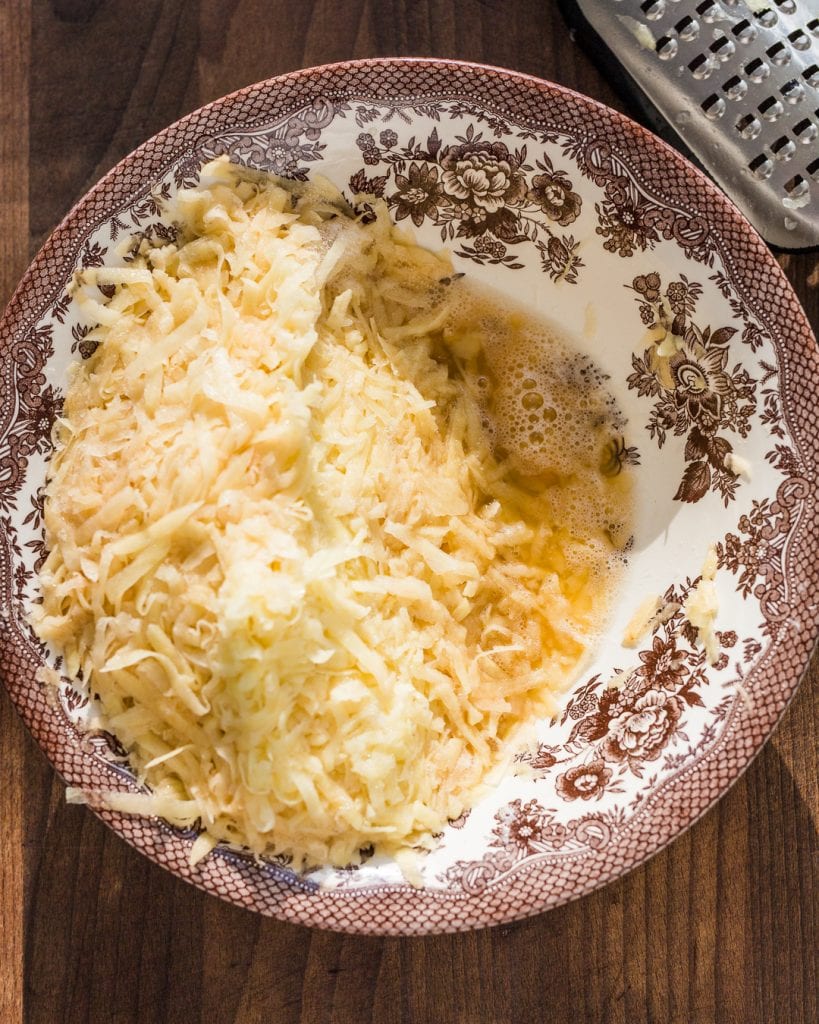 The best news is that these Potato latkes can be made ahead of time and reheated in a 350F oven until warmed through.

As you know, I firmly believe in making your own traditions so feel free to switch it up as you see fit. You’re the boss, apple sauce.

Speaking of apple sauce, potato latkes are commonly served with soft, sweet, puréed apples. Personally, I prefer my latkes with a heavy dollop of sour cream, another very popular condiment. Again, the choice is yours and if you happen to be avoiding dairy, I’ve got a quick-and-easy solution to replace the tangy, silky, and delicious flavour of sour cream (see below). 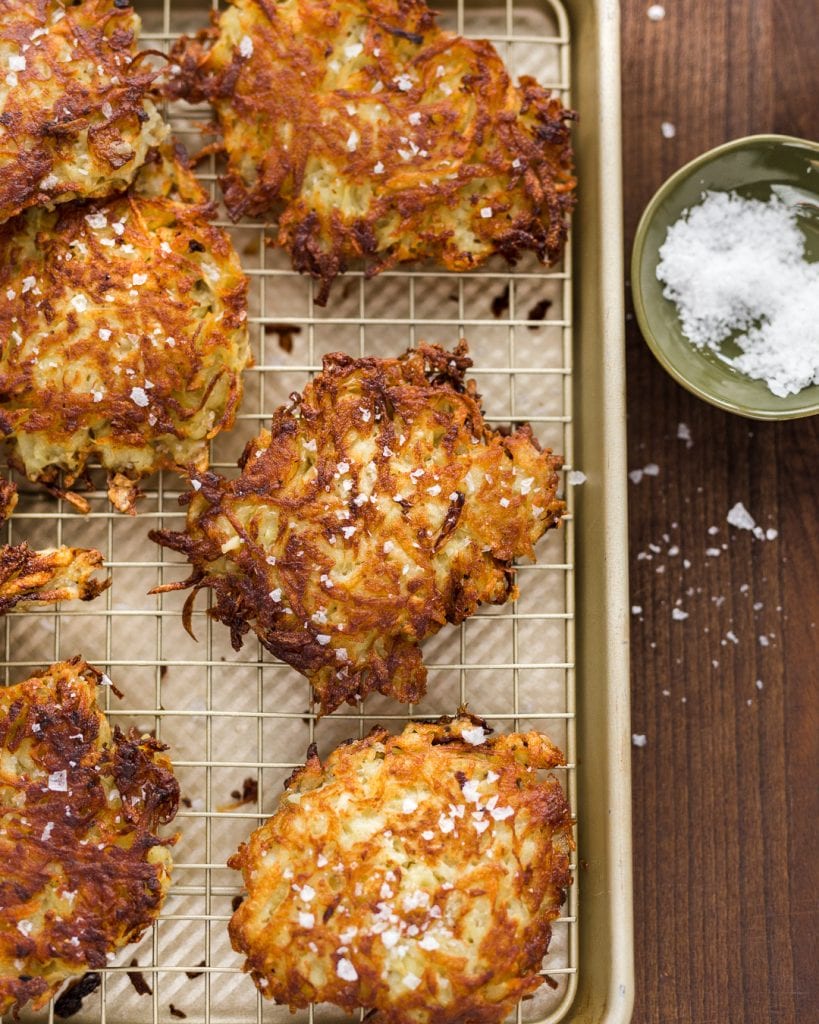 Interestingly, these are not the potato latkes I grew up with (sorry, mom!). My mother is originally from Lithuania and back in the old country, latkes look a little different. The potatoes are grated more finely (think of using the smaller grates on your box grater) and are not fried to achieve a crispety, crunchety texture.

Instead, they’re a bit softer and have a stronger potato and onion flavour. They tend to look more like a pancake than a hash brown. Maybe I’ll share the recipe for my mother’s Lithuanian Latkes sometime soon? 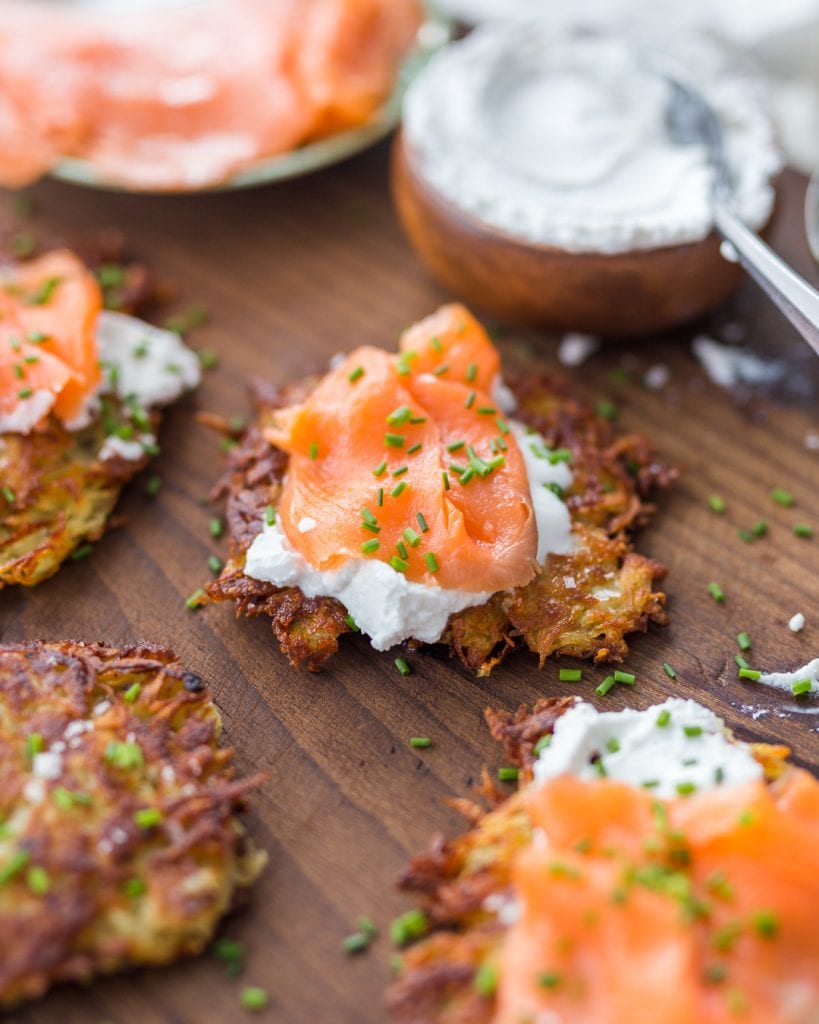 As far as serving these potato latkes, I’ve already hinted at my lifelong love of sour cream. Growing up I would spoon giant dollops of sour cream over my mom’s latkes and sprinkle them with sugar. It was heaven on earth. 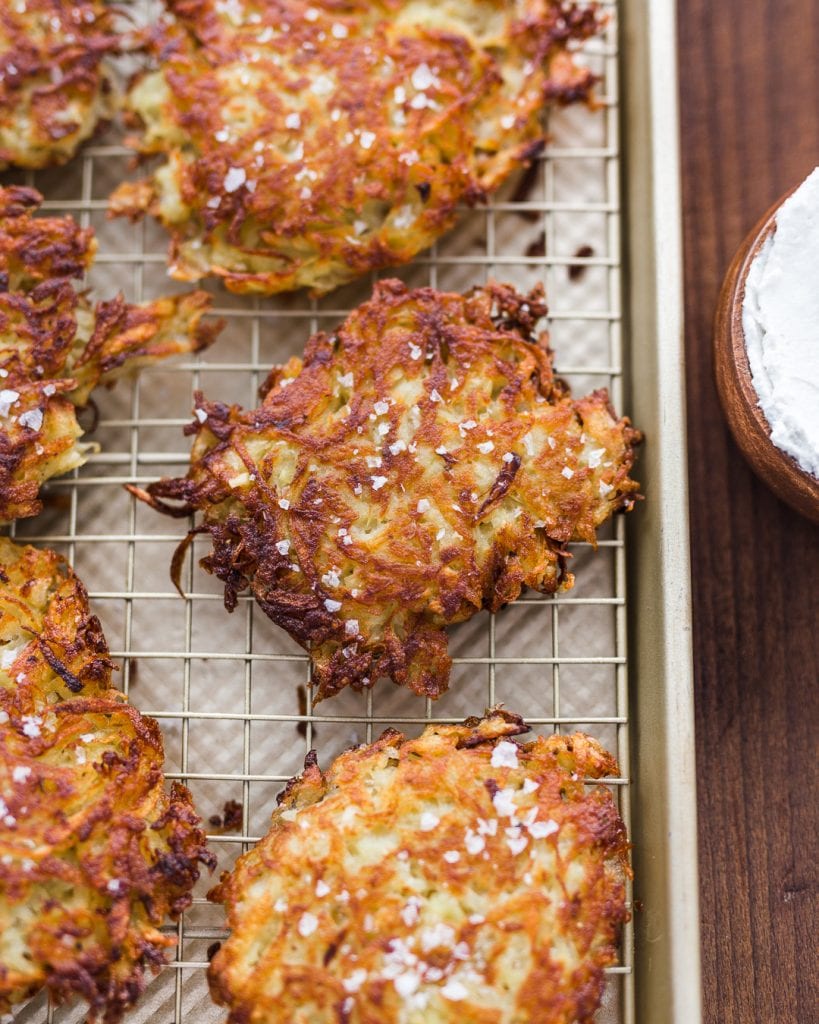 Since I tend to avoid dairy these days, I’ve gotten a bit creative with substitutes. Something that seems a bit odd but really works here is to create a faux sour cream by mixing coconut cream with a splash of lemon juice. There is a slight coconut taste, which I know many people are put off by, but if you like coconut you will love this quick-and-easy condiment. It’s actually a great base to make my Coconut Tzaziki, which tends to taste less coconut-y because of the addition of garlic, herbs and cucumber. 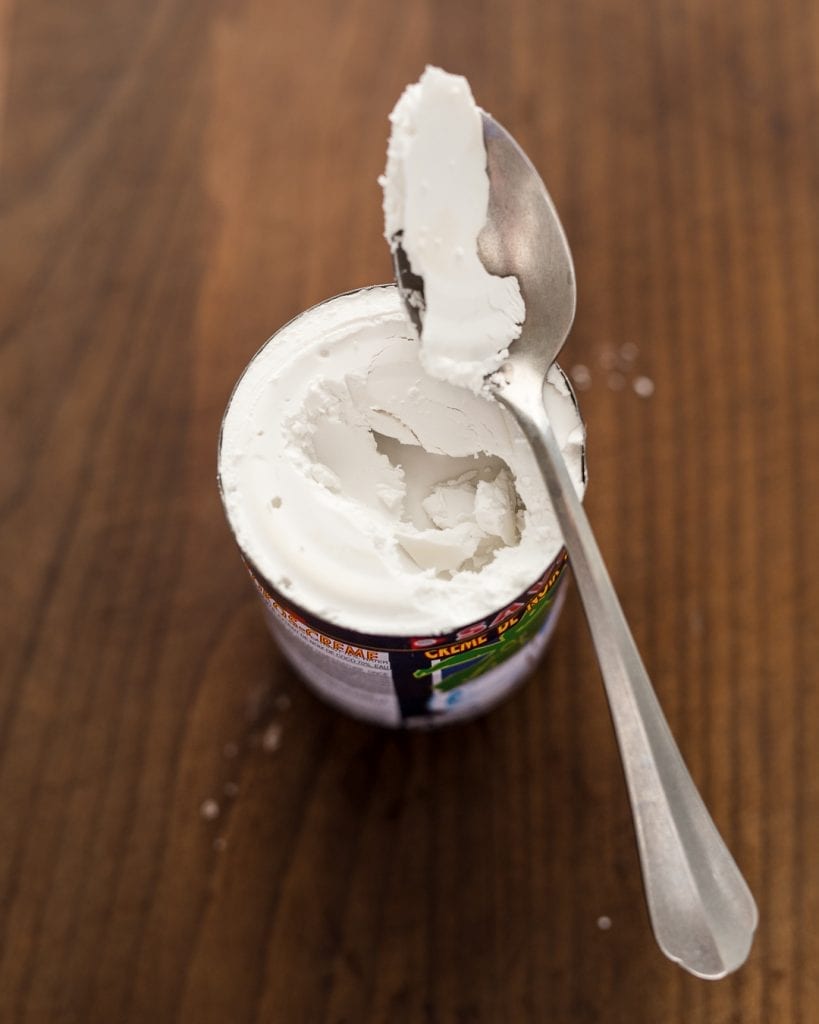 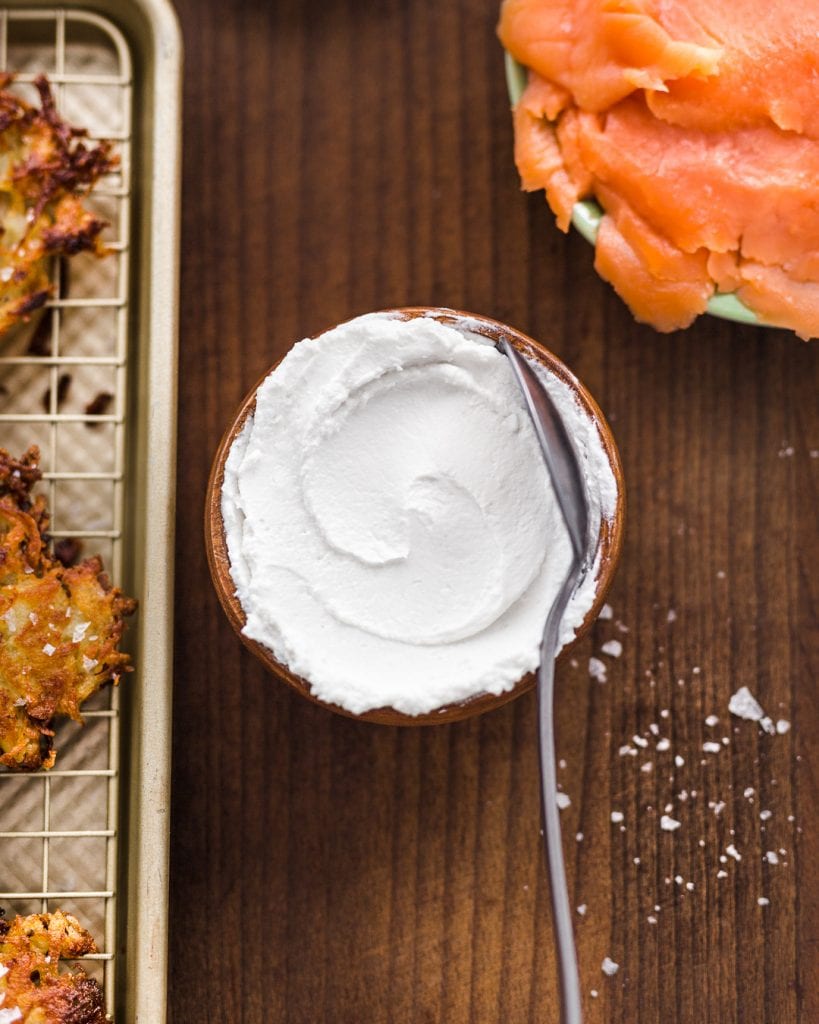 This recipe doesn’t work as well with coconut milk because of the high water content. What you want is the thick, concentrated cream that gets extracted from pressing grated coconut flesh. You can either purchase coconut cream (different from coconut milk), or you can make it on your own by simply refrigerating an unshaken can of coconut milk in the fridge overnight.

The cream will solidify at the top of the can and leave the water below. The next day, spoon the hardened cream into a mixing bowl, add lemon juice and whisk until smooth and creamy. Taste for seasoning and adjust lemon juice to achieve your preferred level of tanginess.

If you’re feeling extra fancy, as I was on the day of shooting this recipe, try topping each potato latke with coconut sour cream and fanning thin slices of luxurious smoked salmon overtop. Garnish with chives or dill and devour with a hot cup of coffee for the ultimate brunch situation.

For the Coconut Sour Cream:

For the Potato Latkes:

For the Coconut Sour Cream:

For the Potato Latkes:

[…] I’ve been using this quick-and-easy substitute for years now. It’s great overtop of Latkes or can be used to make an awesome […]

But why save the starch at the bottom of the water?? Love these latkes and the dairy free sour cream ! Thank you !

The starch is then used as a binder for the potatoes.