This Sausage and Veggie Penne makes for a quick, easy and filling weeknight dinner. It comes together in around 30 minutes and can feed a crowd. Feel free to use any veggies you like or have on hand. Just be sure to cook them in an order that brings out the most flavour and texture. 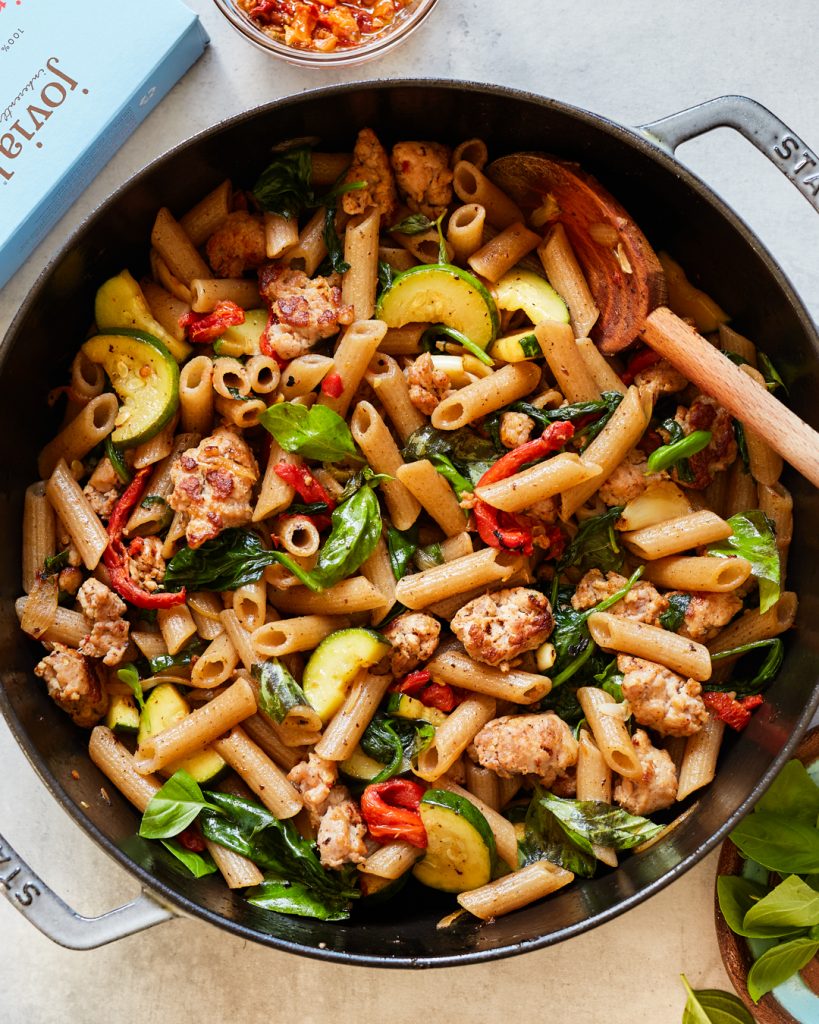 I got really excited when I heard the news that Jovial Foods was launching a full line of delicious grain free Cassava Pastas. I was even more excited when I realized they actually taste amazing!

To celebrate, I’ve partnered with @jovialfoods is giving away one box of each shape to one lucky winner. To enter, follow @jovialfoods and @primal_gourmet on Instagram and tag a friend in the comments section of the photo with this recipe for Sausage and Veggie Penne.

The contest is open to US and Canadian residents only. Contest closes August 23, 11:59pm EST.

What You Need for Sausage and Veggie Penne

In this Sausage and Veggie version, I started things off with some crumbled, mild Italian sausage so that I could control the spice level and let my toddler enjoy it too. If you want to enjoy it spicy, you can substitute a spicy sausage of choice, add some red chile flakes, or drizzle the pasta with some Calabrian chile oil overtop, as I did. You’re the boss, applesauce.

You can use any type of sausage you like. It can be chicken, turkey, beef, or lamb. You can also use cured or smoked sausages, like the chicken and apple ones from Aidells, and slice them. 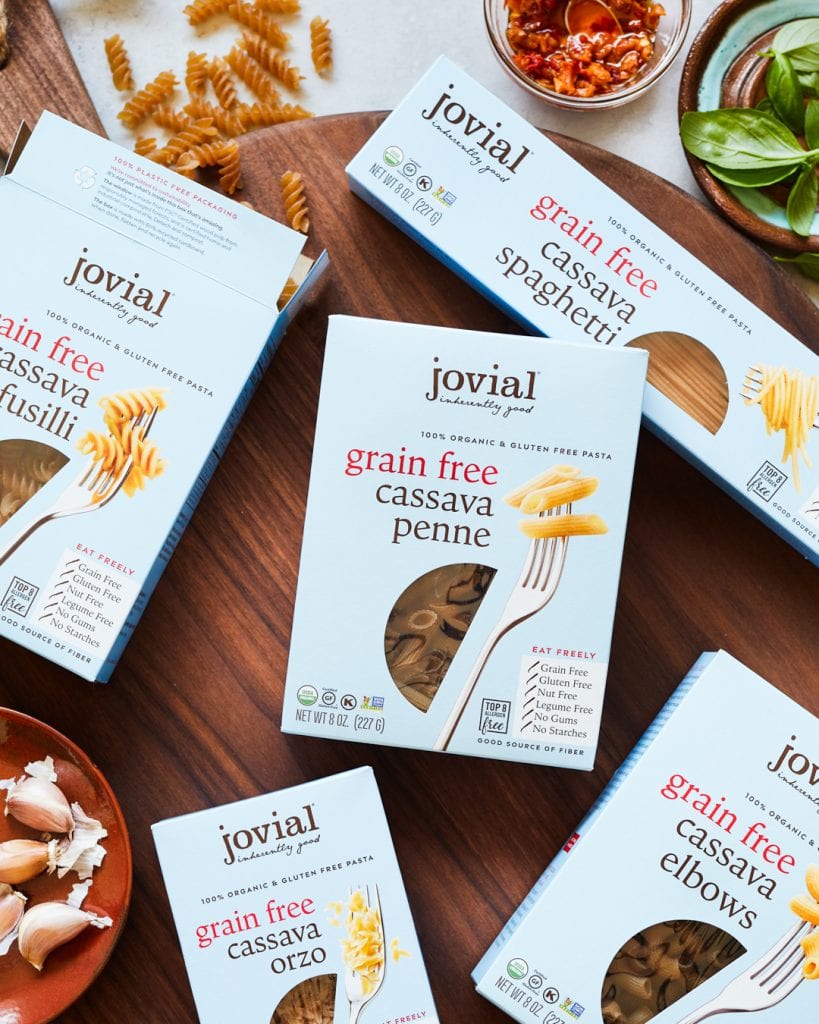 When it comes to the pasta, I used Jovial Grain Free Cassava Penne. Jovial just launched a brand new line of cassava flour pastas that are fantastic. They taste great and the texture is quite close to typical dried flour pastas. What I really like is that Jovial’s cassava pasta doesn’t have the grittiness that a lot of alternative-flour pastas have. Plus, they’re made with only two-ingredients: cassava flour and water.

As mentioned, you can use any vegetables you like here. The trick is cooking them in an order that maximizes their taste and texture. For example, if you wanted to add mushrooms, I recommend cooking them immediately after removing the browned sausage from the pan. That way they have a chance to caramelize and release their natural moisture.

This Sausage and Veggie Penne is cooked in an aglio e olio (oil and garlic) base, meaning there is no addition of tomato product or wine. The only additional liquid that is added is the water in which the pasta cooked, but because the Jovial Cassava pasta water tends to be a bit too cloudy, I personally avoid adding it here. I find that the finished pasta still tastes great without it. 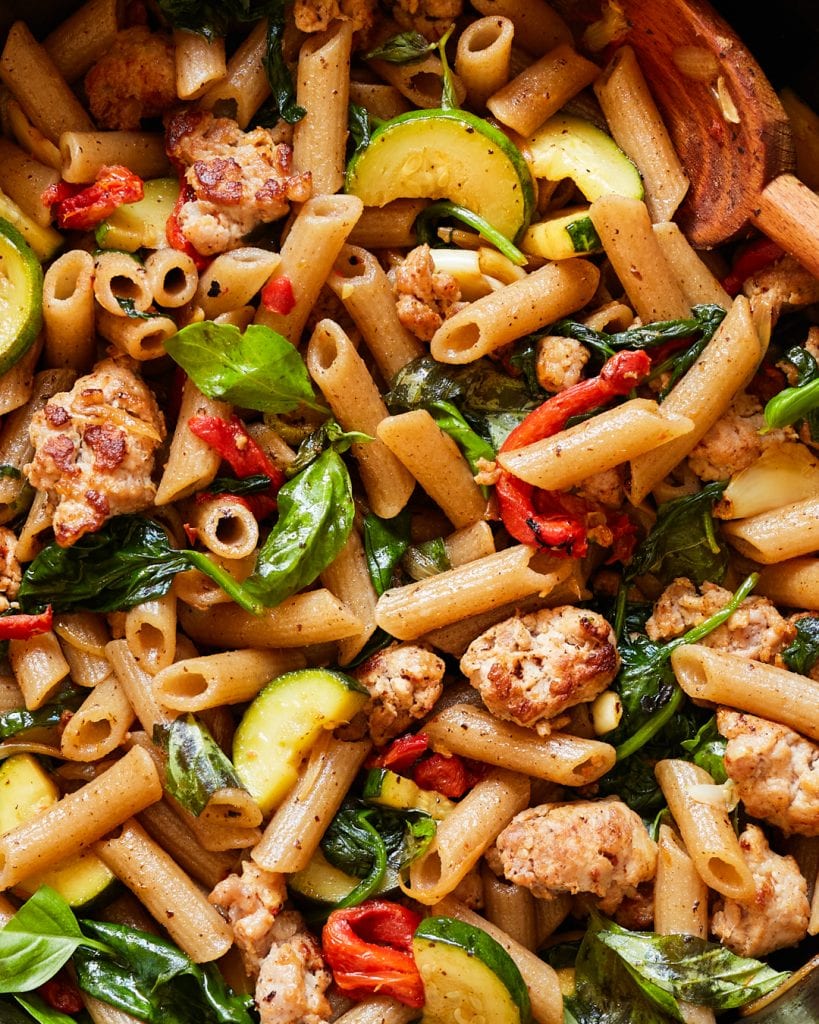 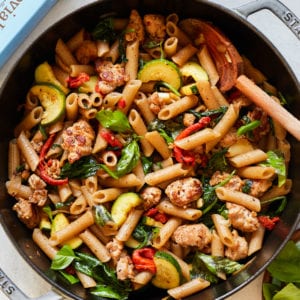 Do you add the sausage back into the pan when you add the pasta back? I figured so but just wanted to make sure!

That’s correct! Thank you for spotting the typo and sorry for the delay in getting back to you!