This recipe was created in partnership with Tessemae’s. All thoughts and opinions are the author’s alone. Thank you for supporting the brands that support me.

As a new dad and real-food advocate, I’m honoured to be part of Tessemae’s Father’s Day campaign. I have no doubt that most of you have gotten your hands on some of their amazing products but in case you haven’t, they make an incredible line up of delicious, organic condiments and dressings. Almost all of the Tessemae’s sauces are sugar-free, organic, non-GMO, kosher and Whole30 Approved, which means they’ve been vetted by the Whole30 team. They’re also insanely delicious and anyone that’s tried their sauces and dressings knows this to be true. They’re readily available at a number of grocery stores throughout the United States. Just check the store locator on tessemaes.com to find a location closest to you. 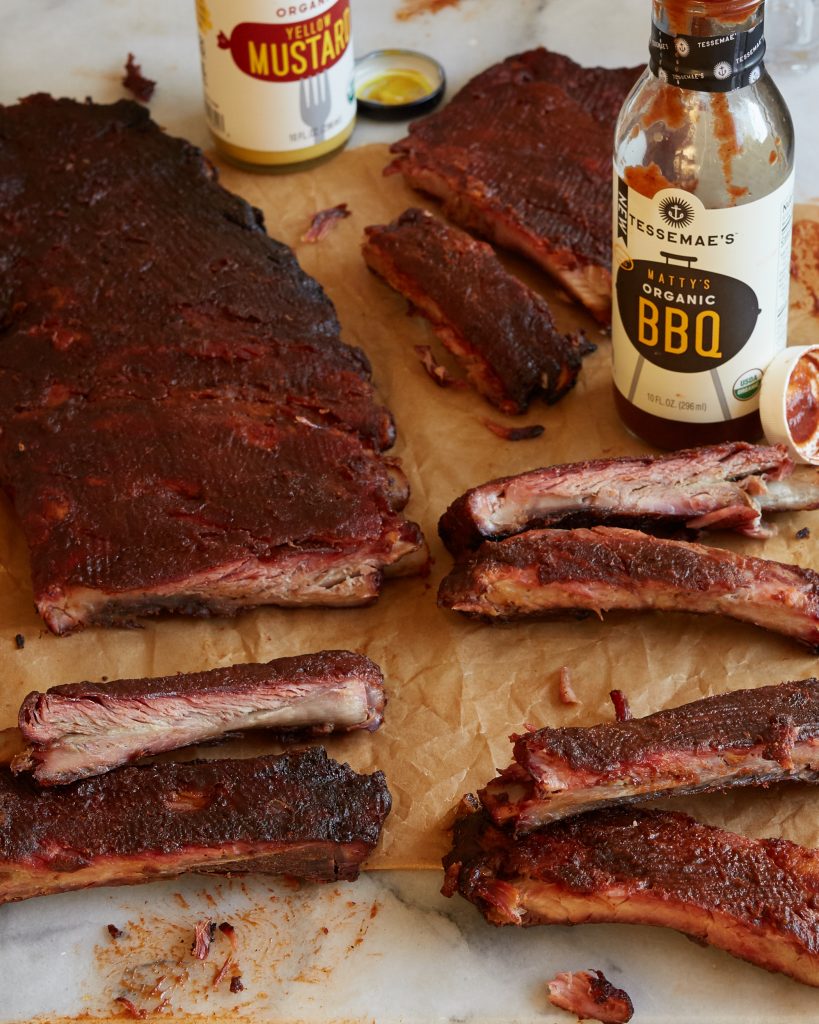 When asked to share one of Dad’s Famous Recipe’s in celebration of Father’s Day, my mind immediately went to BBQ ribs even though it’s not something he ever cooked himself. Growing up, my father would sometimes take my brother and I for BBQ ribs. He worked like a mad man so it was always very special to spend time with him outside of the house. 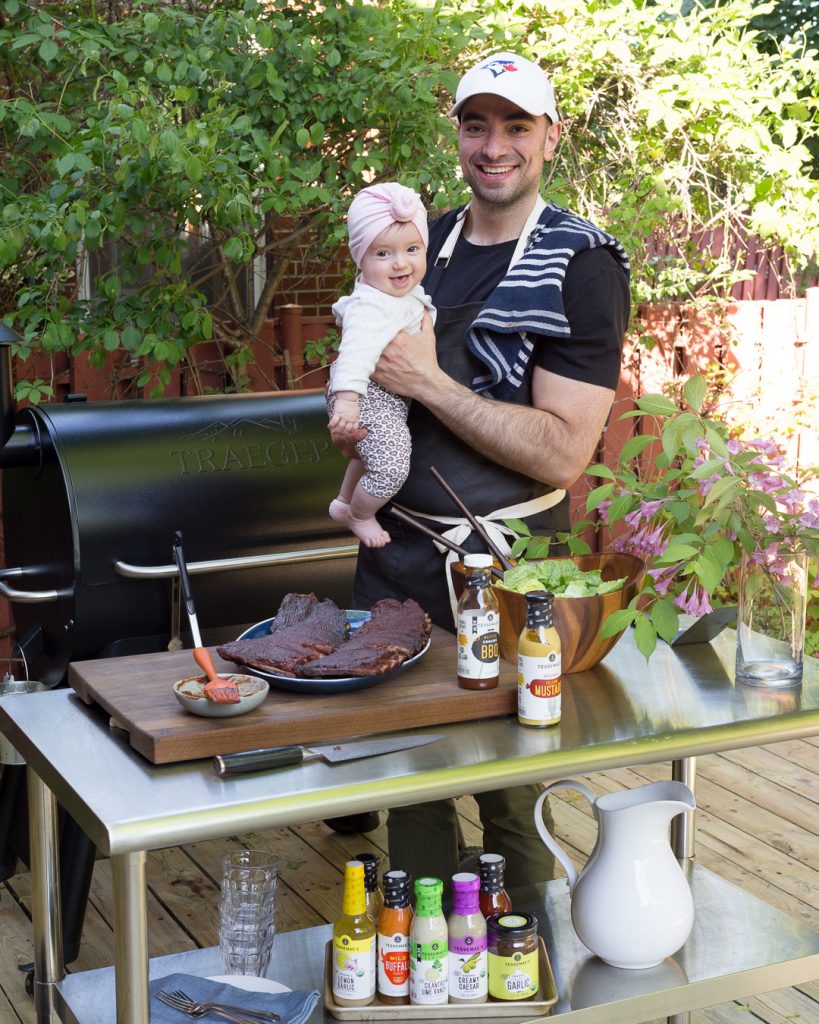 Back in the day, Toronto didn’t have any standout BBQ joints. There was no Stockyards. No Cherry Street BBQ. No J & J’s BBQ, which has since closed. No nothing! We had Baton Rouge, a chain restaurant that served tasty ribs, albeit not smoked. And there was Montana’s, a less appealing chain restaurant that served all-you-can-eat ribs every Wednesday. We usually made our way to Montana’s to gorge on endless racks of saucy ribs. They weren’t the best tasting and we’d always leave with sugar-induced food comas, but for me it was about the company and spending time with my dad.

In my late teens, I tried my hand at making ribs at home. Once a week or so I’d experiment with different techniques, spice rubs and sauces. Part of me became obsessed with cooking the perfect rack. I even got pretty close. My friends and I joked that one day I should open up a BBQ restaurant called “Ronny’s Rib Shack” to fill the void in our city. All I ever wanted was to cook them for my dad and watch the look on his face as the meat peeled off the bone.

Even with all of the great BBQ spots we now have in Toronto, I still love to cook ribs at home. It’s a labour of love that can take up to 6 hours if smoking them, but when you get it right, it’s like striking oil! Aside from the food, I think the reason I love making BBQ ribs at home so much is because it lets me spend time outdoors with the people I care about the most. 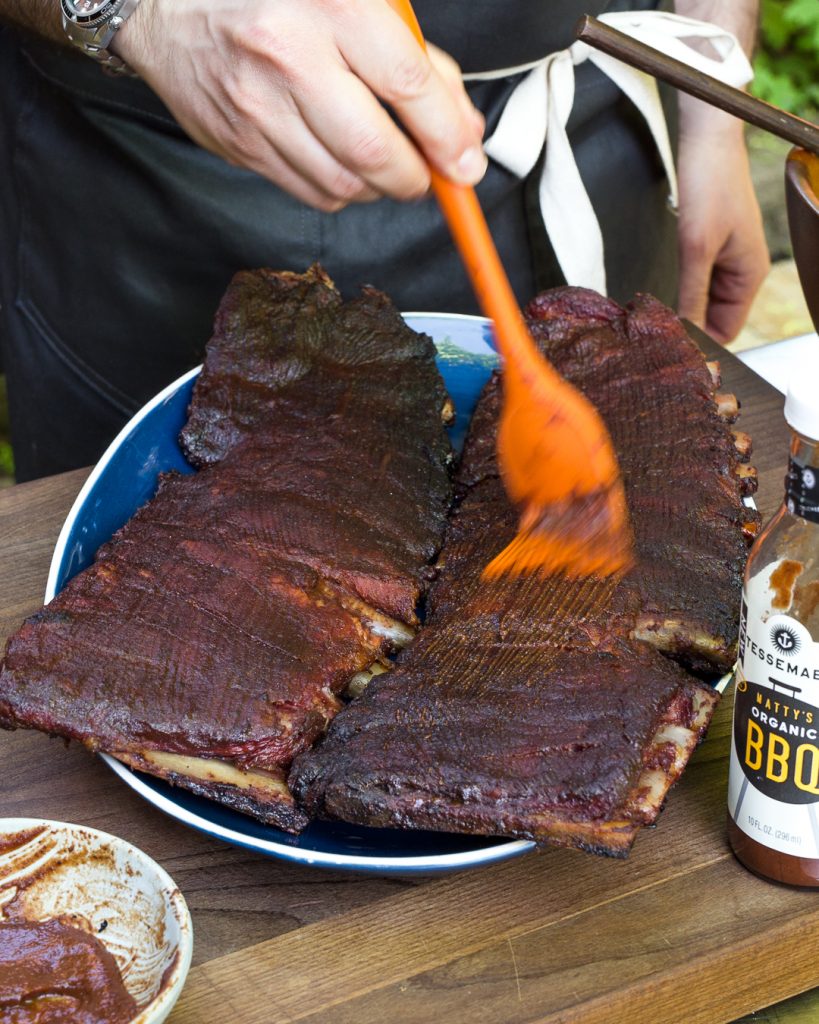 We have a very short summer in Toronto and now that the weather is finally getting warm and sunny, we’re trying to make the most of it. It’s been amazing to hang out with my baby daughter on the backyard deck. Watching her see, smell, touch, hear and experience things for the first time is unlike anything I could have ever imagined. At five and a half months, she’s a bit too young to taste ribs, but I can’t wait for the day that she can! We’ve just started introducing her to solid foods and if she gets this excited about puréed carrots, I can only imagine what her reaction will be to my saucy, smoked, BBQ ribs! Who knows? Maybe one day I’ll open up Ronny’s Rib Shack just as an excuse to hang out with my dad and daughter! Either way, I hope to pass down recipes to my daughter and instil in her the same love and patience for good food that has allowed me to connect with so many people.

The other upside to cooking BBQ ribs at home is that it also allows me to control the quality of the ingredients. It has become more and more important to me that I purchase meat that has been humanely raised free of antibiotics and hormones. It’s equally important to source quality ingredients that are free of artificial sweeteners, fillers and preservatives. I get to enjoy the same delicious flavours I love so much but without all of the unnecessary junk that’s loaded into most bottled sauces.

Luckily, companies like Tessemae’s are putting quality first and challenging the conventional food industry. It’s not a word I use often, but I’m obsessed with these sauces. Sadly, they’re not yet available in Canada so I consider myself extra lucky to have received a sample pack of their awesome products.

Cooking BBQ Ribs with the 3-2-1 Method

When it comes to smoking ribs, I’m a fan of the 3-2-1 method at 225˚F: Smoke the ribs for 3 hours; wrap them for 2 hours; cook with sauce for 1 hour. It’s very easy to follow and delivers consistently delicious results.

To make these St. Louis Style BBQ Ribs, I used Tessemae’s Organic Yellow Mustard and Matty’s Organic BBQ sauce. The mustard gives the ribs a bit of flavour and, more importantly, works as a binder so that the spice rub sticks to the meat. I make an easy, refined-sugar free, homemade spice rub that works equally well on ribs and chicken. I’ve come to affectionately call it ‘Uncle Ronny’s Magic Dust’ because, well, it’s magic. To finish the ribs and get them nice and sticky, I finish by lacquering them with Tessemae’s Organic Matty’s BBQ sauce. It’s Whole30 approved and deliciously sweetened with dates, which caramelizes beautifully on the ribs and balances the mild heat from the rub. 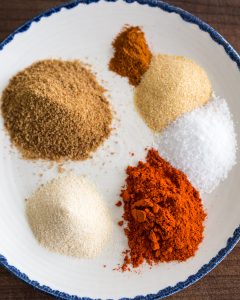 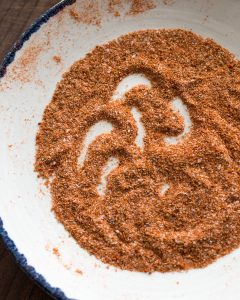 If desired, you can spray the ribs with a solution of apple juice and apple cider vinegar as they smoke in the first three hours. Smoke is water soluble and the moisture allows flavour to build onto the meat. Sometimes I spray, sometimes I don’t. Depends if I have any apple juice on hand. As always, I encourage you to experiment with both methods to see which you prefer. Maybe try spraying one or two racks and leave the others dry? That way you’ll know how you like them.

The hardest part of this recipe is the waiting. It’s really important to let the time and low heat do the work. Please resist the urge to open the grill door or peak into the foil parcels once you’ve wrapped the ribs. Just trust that you’re doing it right and enjoy the process. If you’re not having fun, you’re not making great BBQ! 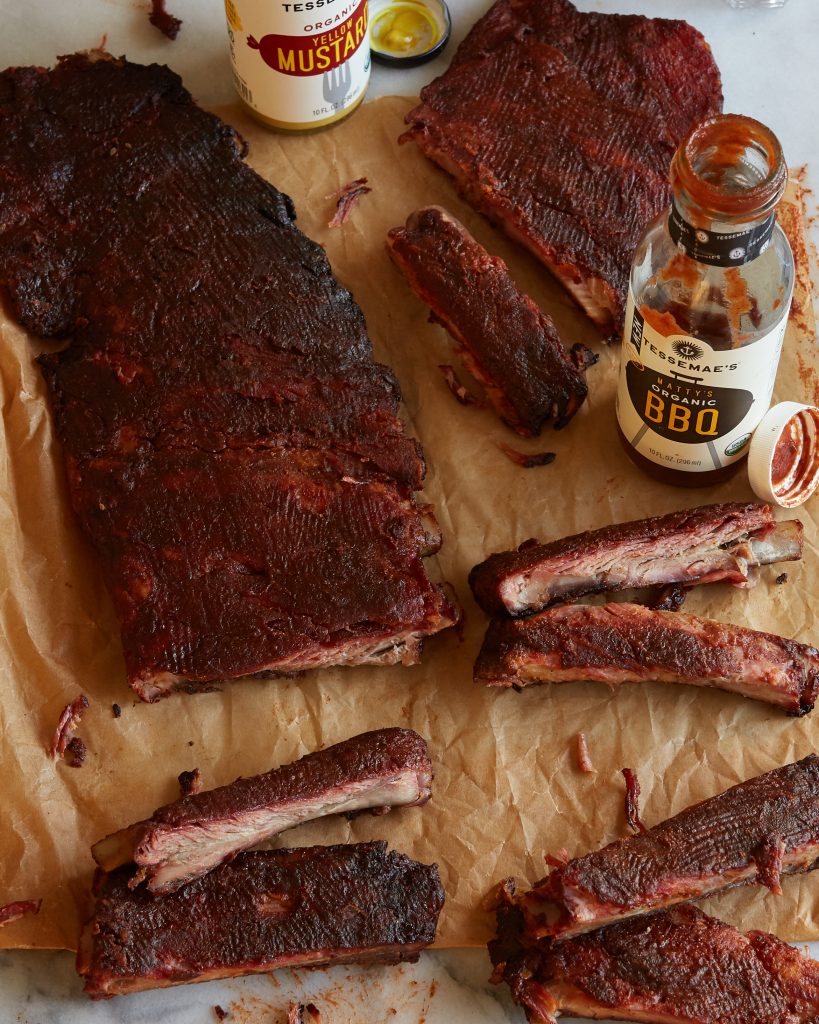 (from a guy who has no business making BBQ disclaimers)

Depending on where you go in the United States, you’ll find different approaches to BBQ. Some contend that BBQ is whole hog only. Others, make room for beef, turkey and pork products, like sausage. There are those who advocate for vinegar-based sauces. And then there are those who prefer tomato-based ones. As an outsider who hails from the north (Canada, not Winterfell), I find myself loving and respecting them all equally. I don’t pledge allegiance to one style over the other because, well, I don’t have to. In my humble opinion, good food is good food and if it brings people together over shared experience, that’s something worth holding onto. It’s even better when that food is as good for the body as it is for the soul! 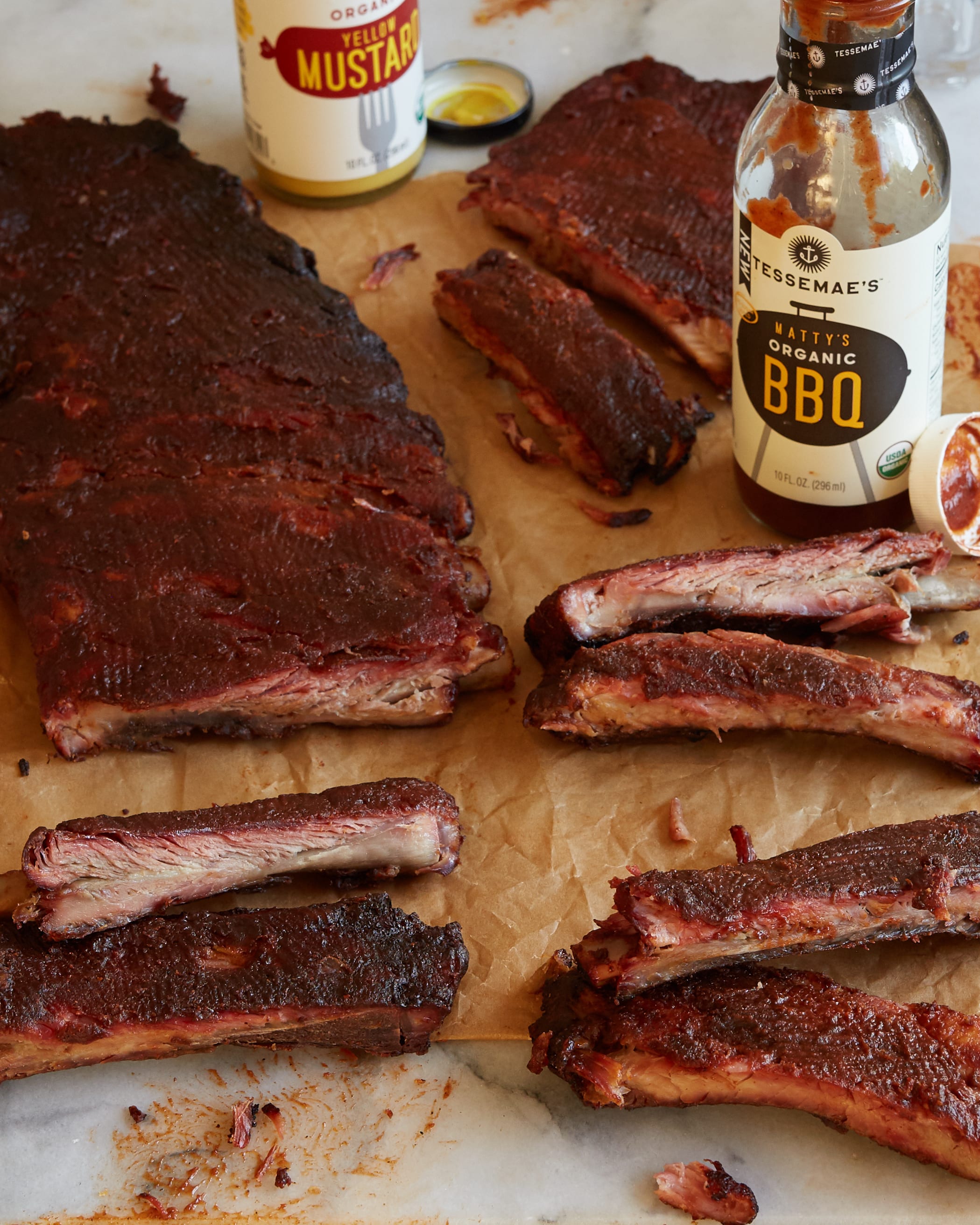 Which cookbook is this recipe in?

This one is just on the blog!

This looks so awesome and I’d love to make it this weekend for father’s day. Plus we are doing a Whole30 right now and need something exciting to add to the menu. I have a typical gas grill. Do you think the timing will be the same? Or could I make them in the oven? If so would the timing/degrees be the same as well? Do I still wrap in parchment and foil if in the oven? Love all your stuff! Such a great Whole30/Paleo resource! You daughter is adorable! 🙂

Sorry, only seeing this now. You can roast them in the oven, covered in foil, for 4 hours at 275F. Then, brush with sauce and cook uncovered for an additional 10-15 minutes for the sauce to get a bit reduced.

[…] tangy and a ever so sweet, this Basic Coleslaw recipe is the perfect side dish for thins like ribs, burgers, steaks, and even roast chicken. It takes only a few minutes to prepare and requires very […]

[…] it! For something homemade, you can try my Balsamic-Maple BBQ Sauce. For something store-bought, Tessemae’s makes a great […]