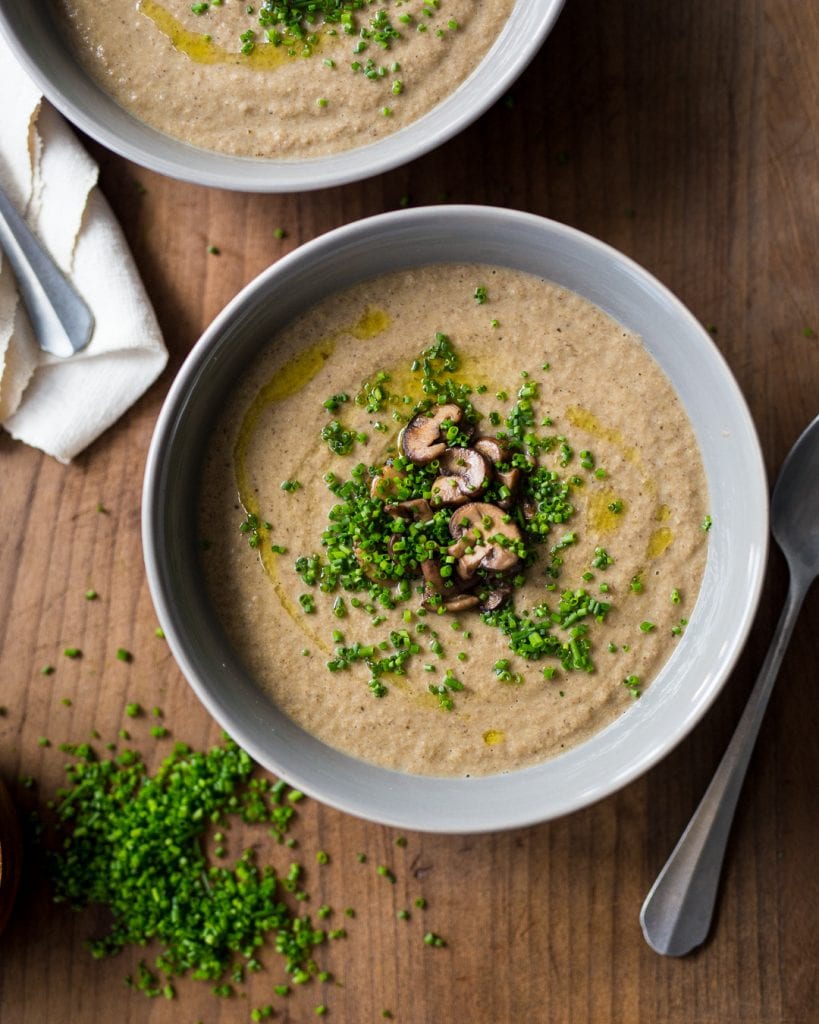 The secrets to a delicious Cream of Mushroom Soup truly lie in the ingredients and technique;

First and foremost, the type of mushrooms and amount you use will have a noticeable difference on the finished product. Personally, I like to use a variety because I think each mushroom brings something different to the table.

I tested this soup with all cremini, all button and a variety of cremini, button and shitake. The last assortment was the one I was happiest with in terms of flavour and colour. If I’m being honest, I only used the white button mushrooms as a filler because they are the least expensive of the bunch and allowed me to achieve a much thicker consistency.

If, however, money was no object, I’d opt for a healthy mix of cremini, shiitake, portobello, porcini and/or even chantrelles! Wild mushrooms are noticeably stronger in flavour than the prepackaged stuff you buy at the grocery store so if that’s an option and you are certain the mushrooms are safe for consumption, I say go for it!

While on the topic of money, if you want to really take this soup to the next level, try finishing each bowl with a drizzle of truffle oil just before serving. Even a tiny amount goes a really long way and compliments the mushroom flavour really nicely! 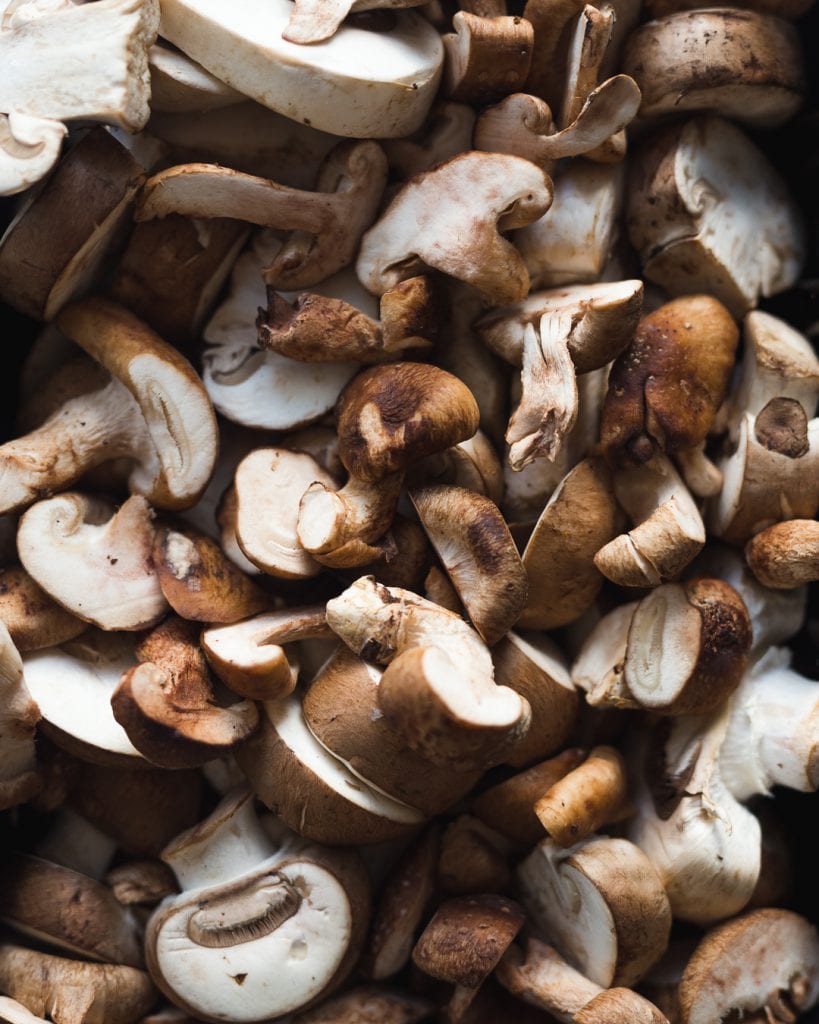 I also found that a good-quality, homemade beef broth makes a world of difference. You can make this with chicken broth as well, if desired, but the mushrooms can stand up to the stronger flavours of beef stock so you might as well go for it!

If you want to take things to the next level, try using beef bone broth. Bone broth has a much more concentrated flavour as well as added nutritional benefits. You can click here for my Beef Bone Broth recipe.

Beef broth not your thing? Try using my recipe for Chicken Bone Broth. 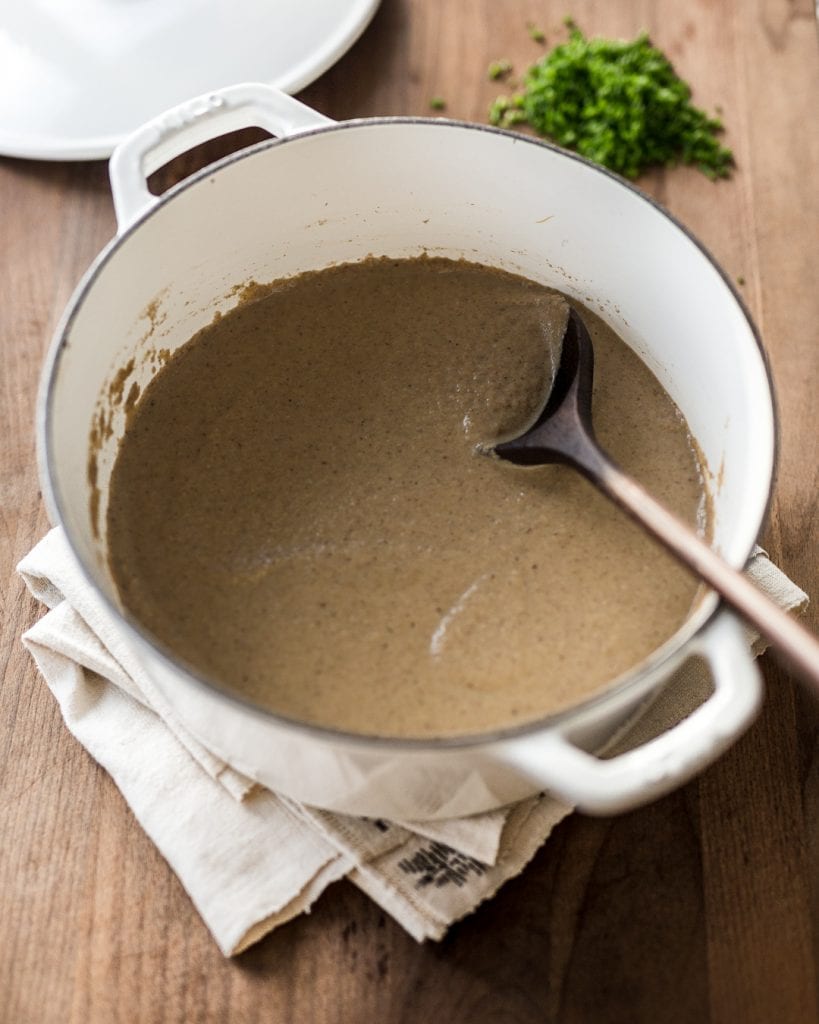 Not all coconut milk is created equally so be sure to use one that you like. I recommend using a full-fat coconut milk (at least 60-70% coconut extract) rather than coconut cream because it can be reduced down and is a bit less forgiving to cook with.

Coconut milk should be made with nothing more than coconut extract and water.

Personally, I like Arroy-D brand, which comes in tetrapaks. Also good, Savoy brand. If you are lucky enough to have a Trader Joe’s in your area, their full-fat coconut milk is about as good as it gets.

Do not be fooled by “Organic” labels, which are often twice the price as regular varieties and loaded with fillers and junk.

In terms of technique, there are actually a few things to consider:

In general, if using whole mushrooms, do not wash them before chopping. Instead, wipe any surface dirt with a damp paper towel.

Mushrooms are like sponges and will absorb just about any liquid they come into contact with. In fact, most fresh mushrooms are already full of water anyways. Washing them will just load them even further. All of that liquid will get released into the pan during cooking and cause the mushrooms to steam, rather than brown.

Sautéing (cooking while adding colour) the mushrooms is a crucial step in developing and concentrating flavours so the last thing you want to do is prevent that from happening.

In the case of this soup, it should be noted that your mushrooms will most likely release liquid before they brown regardless of whether you wash them or not. The reason is because we are using so many mushrooms that some steaming action at the bottom of the pan is inevitable.

DO NOT DRAIN THE MUSHROOM LIQUID: As tempting as it may be to speed up the process of browning by draining any rendered water, I urge you to be patient. This water will eventually concentrate and evaporate. Not to mention the fact that you’ll also be discarding valuable olive oil and ghee. 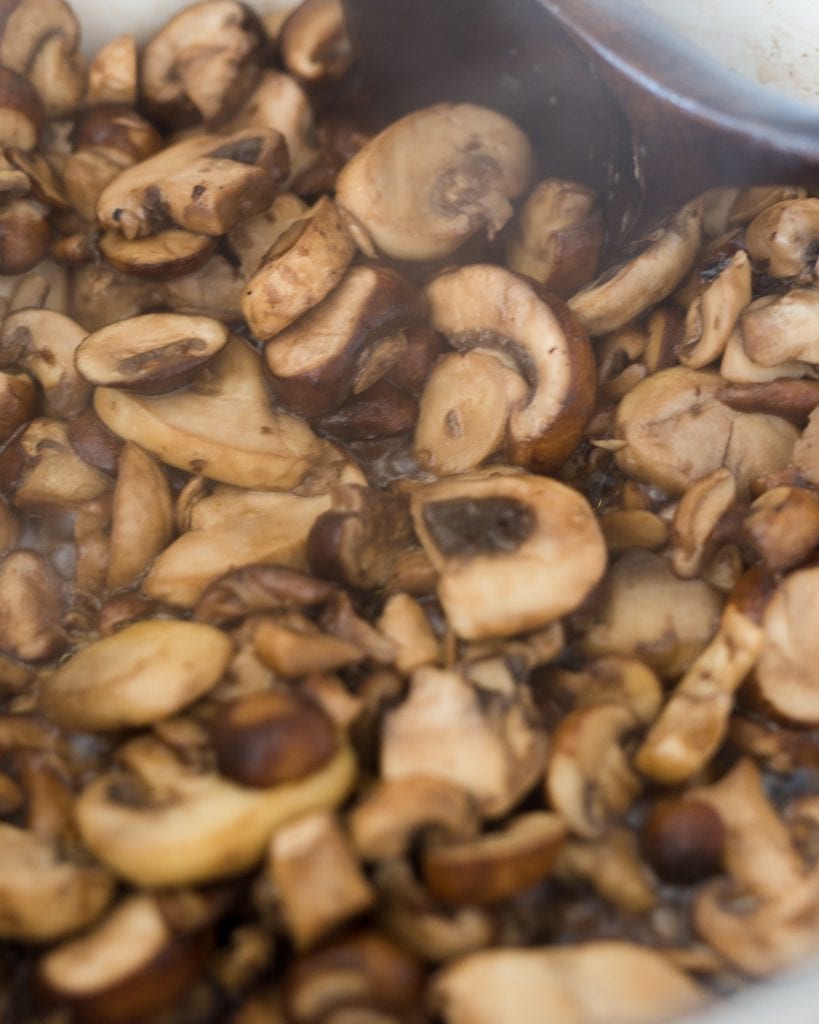 Just about every Whole30 and Paleo cream-of-something-or-other-soup does not mention this step and it is truly a shame.

I assume it’s because people think coconut milk or cream are interchangeable with regular milk or cream, and I understand the confusion. Traditional Cream of Mushroom soup, for example, is finished by adding cream at the very end. However, regular cream is not nearly as strong in flavour as coconut milk and, therefore, doesn’t need to be cooked to change its flavour profile.

The question I am most frequently asked for any recipe with coconut milk is, “does it taste like coconut?” In the case of this Cream of Mushroom Soup, I’d say only a little but it’s very mild because I take the time to cook the coconut milk with the mushrooms, leeks, shallots and garlic. If I was to simply add the coconut milk at the end, I assure you the coconut flavour would overpower just about everything.

Anyone that’s ever made my Chicken with Mushroom and Tarragon Cream Sauce can vouch for the above. 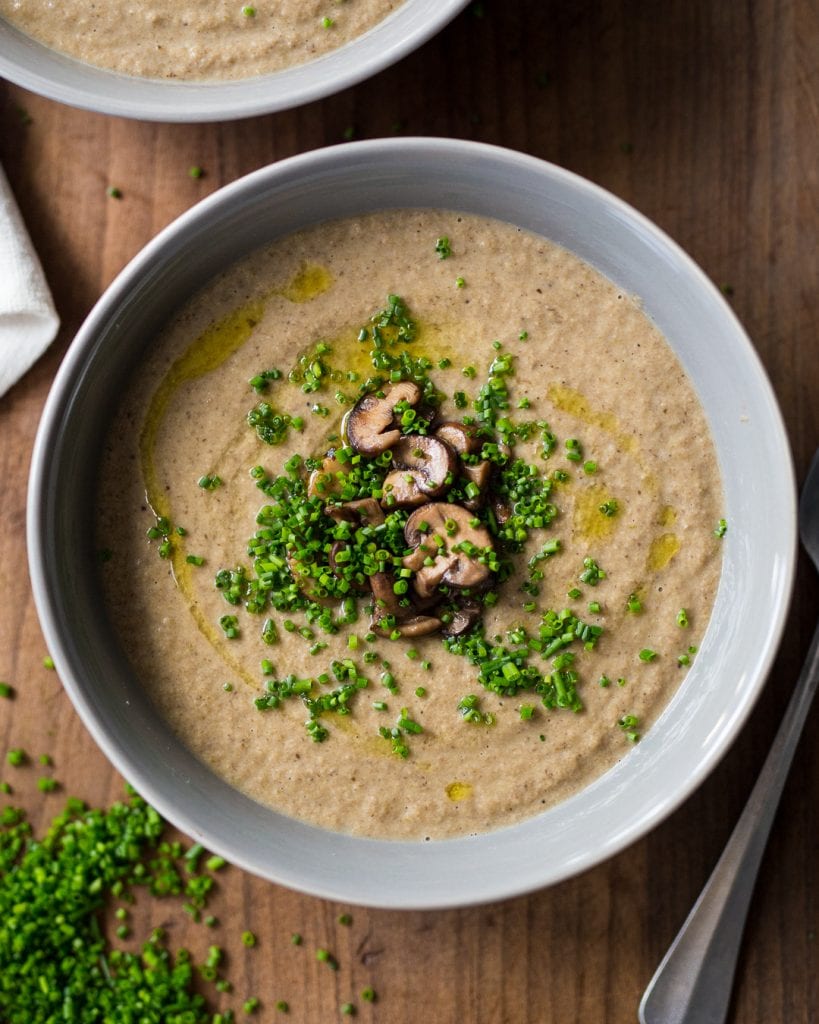 This is an optional step and you don’t have to heat the broth in a separate sauce pan before adding it to the soup, but it does save you some time since you will have to wait for the cold broth to reach a simmer before moving on to the next step.

Also, I have found that adding cold broth to hot coconut milk can sometimes cause it to separate. Heating the broth before hand does not require tempering the liquids and results in an emulsified finished product. But I think this depends a lot on the quality and fat content of the coconut milk to begin with. 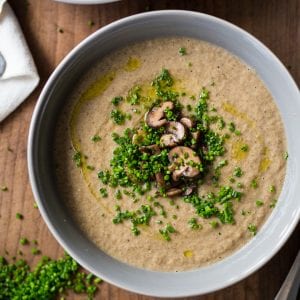 Loved watching this come together on your stories. I just bought a stick blender, and this may have to be the first thing I try! Thanks for the easy to follow recipe.

Can a homemade veg broth be used? I made one that included shiitake mushrooms. Can’t wait to try this recipe.

This recipe was SO GOOD. After I blended it, I wanted a tad more texture so I took another 8 oz of mushrooms, chopped them and sauteed them in ghee and olive oil with a little salt and pepper and added to the soup. It was fantastic without it — I just wanted a little more texture. Can’t wait to make this again. I need to hide it from my husband.

Happy Sunday! I used your recipe, but I roasted the mushrooms in the oven @400 F while doing this week’s food prep. The mushrooms were so good, I kept eating them off the pan, and the FOND…don’t get me started, I would have licked the pan if I hadn’t figured out how to de-glaze without making a mess. Thanks for doing such a good job and being a wonderful inspiration!

So glad to hear you enjoyed!

So if I’m totally cool with dairy, do you think I could use whole milk instead of coconut milk? Would I add it at the end like you mentioned, or follow the directions the same?

I would add it at the end if using dairy. For a richer flavour, you can use cream.