Needless to say, the Paleo Banana Bread in my previous post didn’t last very long (get the recipe here if you haven’t made it already).  If you did make it you’ll know exactly what I mean. However, being the kind of guy who likes to plan ahead, I made two loaves – as you can see in the not-too-shabby-if-I-do-say-so-myself pics from a few days ago! 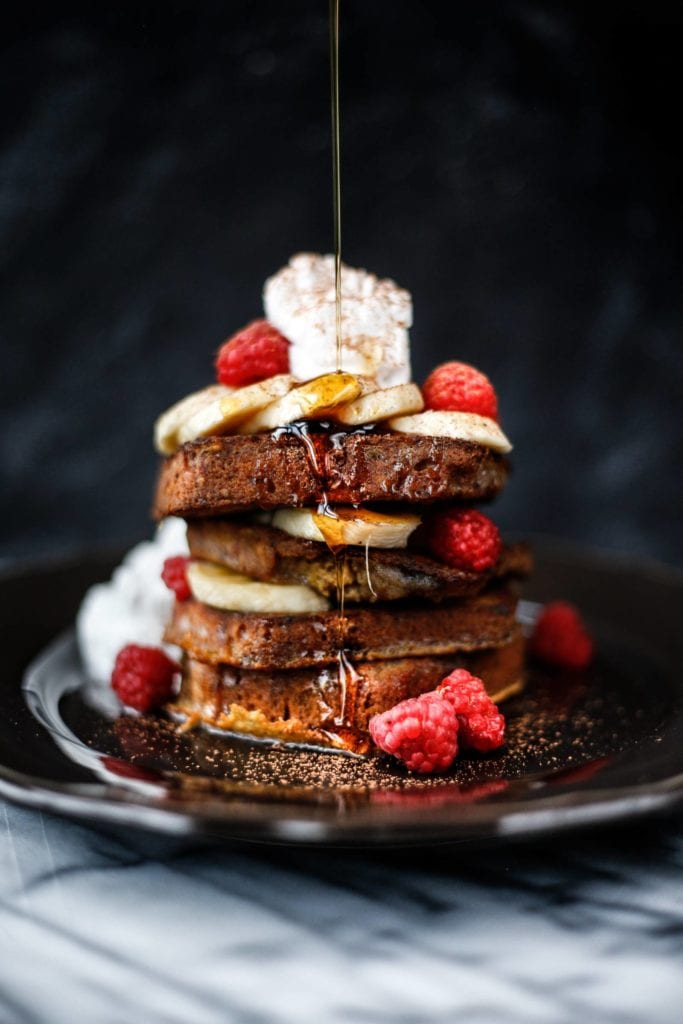 If for some unfathomable reason you should find yourself with leftovers of this moist, delicious, Paleo Banana Bread and would like to transform it into something even more divine, well then you’ve come to the right place. In the shower, the night of baking the banana bread, I was trying to decide what to have for breakfast the following morning. Yeah, I shower before bed. And yeah I think about food while I do. So what?

Ah, I digress… Truth is, I tested Juli Bauer’s Banana Bread recipe three times over two days in different variations (full almond flour, full coconut flour and a mix of the two). By the way, I have to give huge props to Juli Bauer for creating the original recipe for this loaf. In any case, by the end of it all I was banana-bread’d out. Even though they were delicious, I had my fair share and wasn’t so keen on eating anymore of it. But the eastern European in me has a serious allergy to letting food go to waste. Then, it struck me, FRENCH TOAST! I hadn’t eaten French toast in years. As a kid, I loved the stuff. In Russian, we call it ‘Grenka’ and like the immortal Bolognese everyone’s mother makes the best version. Indeed, my mama makes the best Grenka in the universe, bar-none!

Since the Paleo Banana Bread is ‘bready’ enough and can hold its ‘bread’ shape without falling apart, it only made sense to adapt my mama’s old Grenka (AKA French toast) recipe to it. Whereas mama used to use whole milk in the batter and sprinkled powdered sugar overtop, I substituted almond milk and hit it with a glorious sprinkle of raw cacao. I also topped it off with a dollop of coconut “whipped-cream,” some fresh fruit and a healthy drizzle of good ol’ organic Canadian maple syrup. The result is a sweet and delicious brunch or breakfast dish that goes best with a cup of hot coffee – black, fair-trade, organic, single-origin, freshly roasted, freshly ground, brewed in a Chemex!

Give the recipe a go and let me know what you think in the comments section.

Here’s what I did with four 1” slices of leftover Paleo Banana Bread:

wow, just came across your site from Foodgawker and I have to say that you have some absolutely gorgeous photography! And this french toast looks and sounds amazing. It will have to go on my “must try” list!

Thanks Michele! Let me know how it goes when you make it, I’d love to hear your thoughts!!! My family really liked it and they don’t normally like coconut flour.

This french toast recipe is fantastic! All good ideas happen while your in the shower! I’ve been really wanted to make french toast AND banana bread lately but strictly paleo and this works perfectly!

Thanks Linda! My best ideas come to me while bathing! LOL I really hope you like the recipe! Let me know how it turns out!

I also just wanted to say how amazing the photos are here! I’m gonna add them to my Pinterest list of beautiful food shots, haha. Really wonderful and inspiring. Of course the food looks wonderful as well, which is always the point. 🙂

Thank you very much Allie! I appreciate it!

Wow! Such beautiful photos, plus this french toast looks absolutely delicious!!! So glad I found your blog, great job!

Thanks so much Kaylie! You’ve gotta try it. It’s a game-changer!

French toast is such a nostalgic food for me… and this is bringing that feeling over me now! Looks so stunning, and that cinnamon in the air shot… Dangggg! Mouth-watering. Great ingredients 🙂 XO

Thank you Alison! It was a fun one to photograph!