Shakshuka merguez is a riff on classic shakshuka, specifically the one that commonly believed to have originated in North Africa (possibly Tunisia, Libya, Algeria or Morroco). Shakshuka can be loosely translated to “mixture” or “mishmash” in certain Arabic dialects. In it’s most basic capacity, Shakshuka is nothing more than eggs poached in a tomato sauce.

Yet this humble dish is anything but simple and resists singularity. It begs to be played with. Be it in terms of flavour, texture, or technique. Shakshuka is a dish for the people, by the people. ALL PEOPLE. And anyone that tells you otherwise is holding onto something that likely isn’t theirs to begin with.

The words “tradition” and “authentic” get thrown around a lot when talking about food. Most of the time, these words are accompanied by cultural and religious baggage. If there’s one thing I’ve learned since starting my blog, it’s that nearly everyone and their mother has a different idea of how Shakshuka is “supposed” to be made. Even the word itself is so highly controversial that I now hesitate to even use it.

Personally, I love the fact that so many cultures have their own version of “Shakshuka”. It suggests a common passion for food that is shared by people around the world and reinforces the fact that there is no singular or best way to make anything. Perhaps more importantly, it hints at the truth that we all share a common ancestry but have evolved in a number of different ways. 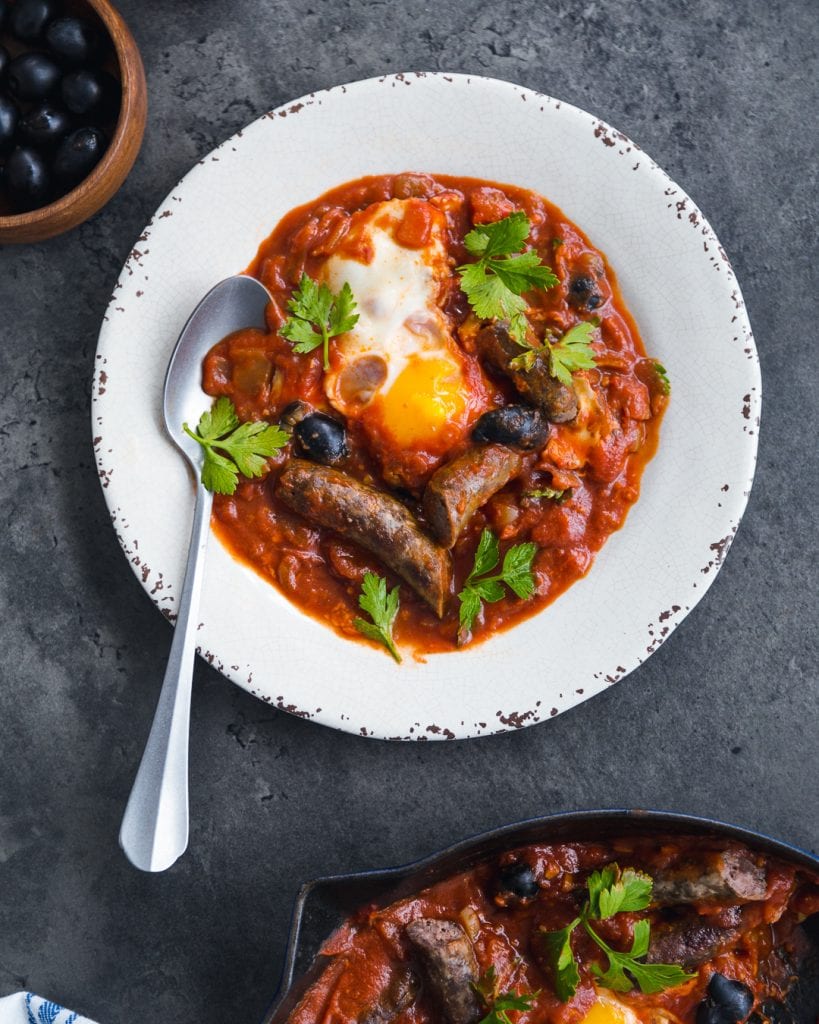 It seems to me that what goes into a Shakshuka and how someone cooks it depends entirely upon the person making it, who they learned it from, and where in the world they learned it. I’m not being cheeky with the last part. Geography plays a huge role in the ingredients, technique and terminology, not least because the availability of ingredients plays a determining factor in what you put into your Shakshuka. These days, that’s become less of an issue since you can get just about anything you need if you’re resourceful enough.

Depending on where you are in the world, a dish of eggs poached in tomato sauce might be called something entirely different. In Turkey, it’s commonly referred to as menemen. In India, it’s simply an egg curry. In Italy, it is often called uova in purgatorio (eggs in purgatory). Leave it to the Italians to be Baroque about it. Other known names include, but are not limited to, ojja, jazz-mazz, and makhlama.

The recipe I’m sharing below likely comes close to North African versions of Shakshuka for a few reasons. The first is that I’ve chosen to include merguez sausage. Merguez is a spicy lamb or beef sausage (or combination of the two) that is popular in North African cuisine. It’s not something that’s often carried in your run-of-the-mill grocery store. You might be able to find it at an ambitious Whole Foods location, but your best bet is to seek out a Middle Eastern butcher.

Secondly, I’ve decided to flavour the tomato sauce with Harissa. This potent, North African chili paste adds so much complex flavour and pairs perfectly with the tomato sauce and merguez sausage. In fact, if the butcher has done a good job, there’s probably some harissa in the sausage already.

But that’s probably where the North African buck stops.

Instead of using fresh tomatoes, I’ve gone with passata, an Italian puréed and strained tomato sauce that usually come in a glass jar. I’ve also used cubanelle peppers, which are mild and perfect for sautéing because their thin skin virtually dissolves into the sauce. To add some depth of flavour, I’ve seasoned the dish with smoked Spanish paprika. Plenty of onions and garlic get sautéed for good measure, and everything is garnished with black olives and fresh parsley.

This is just one variation and, as mentioned, the possibilities are endless. See here for some other Shakshuka recipes. I think it’s up to you to figure out what combination of spices, vegetables, and proteins you like best. And the only way to do that is to cook Shakshuka over and over again. 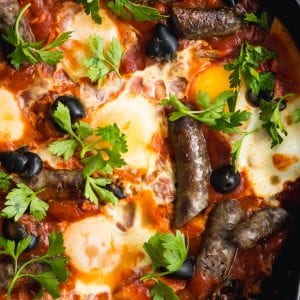