I have made versions of this North-African style shakshuka many, many, many times! I first shared a recipe for it back in 2015 and made a horrendously bad YouTube video. That video now has over 4.4M views, 88K thumbs up, over 5.2K comments views, and is the third most viewed Shakshuka video on the platform (not counting the Shakshuka song). I think part of its popularity was due to the fact that I used a very dull and awkward skinning knife to chop onions and tomatoes. This seems to upset people.

Where Does Shakshuka Come From?

Shakshuka is believed to have originated in North Africa, most likely Tunisia, and can be loosely translated to “mixture” or “mishmash” in certain dialects. It is extremely popular throughout Israel and the Middle East, as well as many other parts of the world where entirely different names are assigned to the dish. It’s even become increasingly popular in North America.

In various parts of India, eggs are hard-boiled, poached in a tomato sauce and called Egg Curry. In Italy, an almost identical version of North-African Shakshuka is called Uova in Purgatorio (Eggs in Purgatory). In Mexico, fried eggs are served with tomato salsa and called Huevos Rancheros. In Turkey, things get a small, but significant, twist in that they are are scrambled in the tomato sauce and called Menemen. As far as I’m told, Turkish shakshuka never has eggs and is actually closer to a traditional Ratatouille in that it involves stewing various vegetables together. 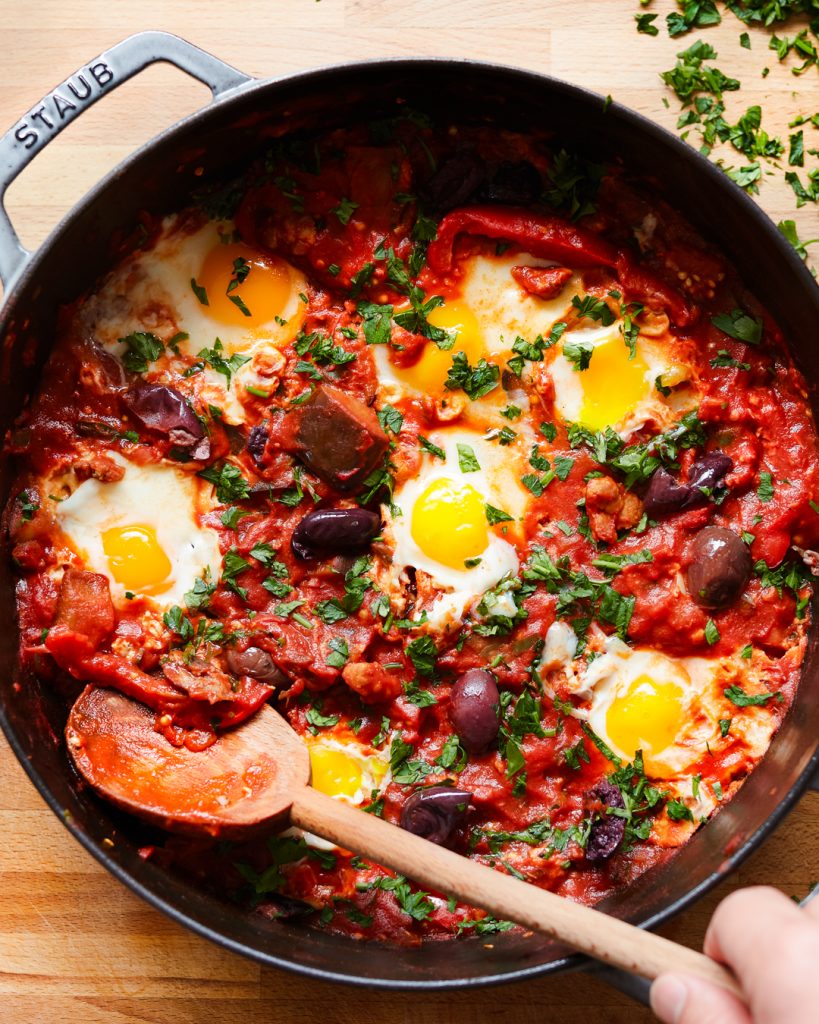 How is Shakshuka Made?

Onions, peppers, garlic and spices are sautéed in oil before tomatoes are added to the pan. You can use canned whole tomatoes, canned crushed tomatoes, tomato paste mixed with water, jarred tomato passata, or even fresh, chopped tomatoes. Each iteration brings its own special qualities to the dish.

The eggs are then cracked directly into the tomato sauce and poached until cooked to your desired doneness. The eggs can be cooked on the stovetop or finished in the oven. Once the shakshuka is ready, it is commonly garnished with fresh herbs and cheese.

But here’s what I’ve learned over the years: shakshuka has no singular definition and is one of the most polarizing dishes on the face of the earth. It is hyper regional, extremely personal, and just about everyone has an opinion on it. And these things are exactly what makes shakshuka so incredibly special! The fact that it varies so much from country to country and family to family allows for new and interesting flavours and combinations to arise.

Now, more than ever before, recipes that lend themselves well to substitutions are the name of the game. With the entire world on lockdown due to COVID-19, and people finding themselves self-isolating for two weeks at a time or longer, it is extremely important to make use of what you have. This is especially true when it comes to making use of fresh produce.

Shakshuka is a perfect dish for such circumstances. So is Minestrone, Frittata, and Tuna Cakes, in case those are of interest as well.

Can I Make My Own Version of Shakshuka?

Shakshuka can be extremely basic, using nothing more than tomatoes, onions, garlic, paprika, and eggs. This is actually how I prefer it, personally.

Or, it can get fairly elaborate and incorporate just about anything you have in your fridge or pantry. It’s entirely up to you what goes in your shakshuka. You’re the boss, applesauce!

In this shakshuka recipe, I used jarred tomato passata and made use of some things that needed to get used up before they go bad: eggplant, sausage, peppers, onions, fresh herbs and, of course, eggs. 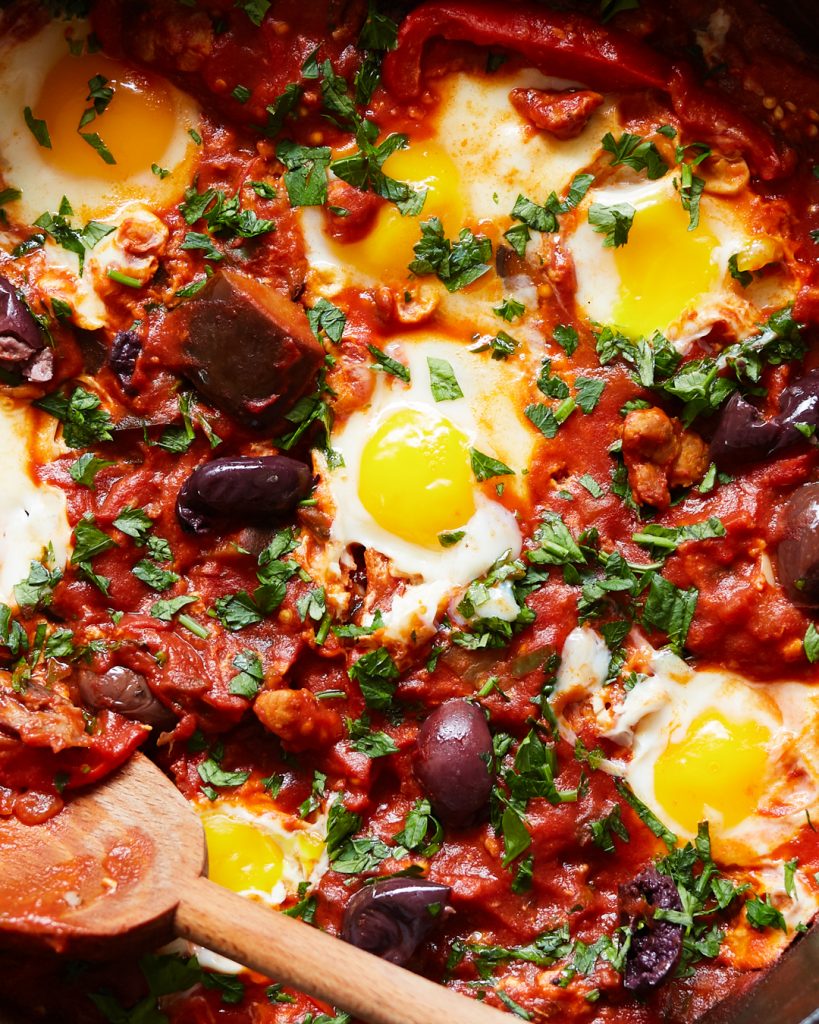 You may not have these ingredients in your fridge or pantry, so I made this list of substitutions and ideas below. This is just  to get the ball rolling for you. Feel free to pick and choose whatever combo you want or have. Most of the suggestions are Whole30 and Paleo-friendly, but I’ve also listed others that are not for those who are not necessarily following any specific protocol.

Ground meat or poultry (any type) 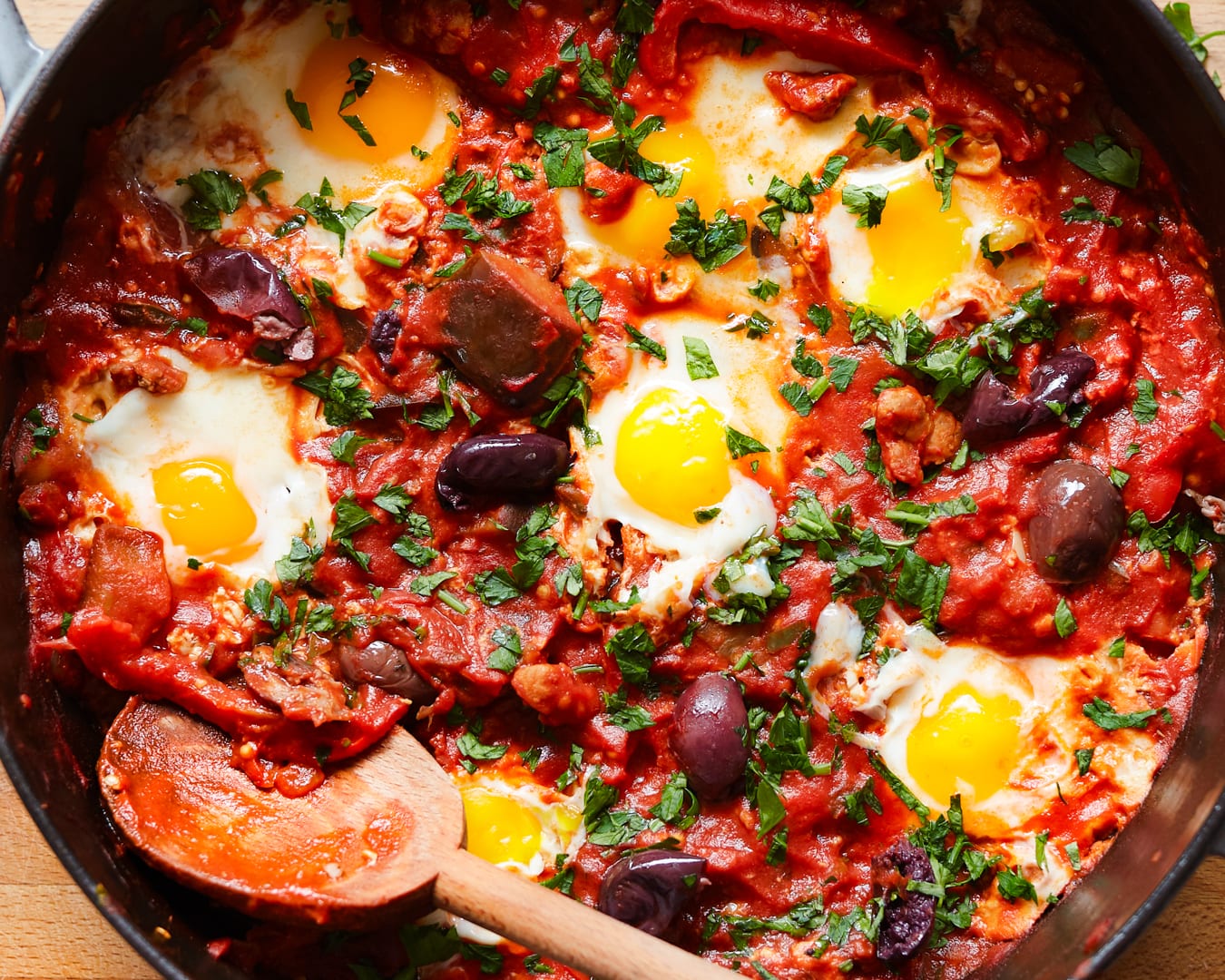