This recipe for Paleo Apple Crumble is about as easy as it gets when it comes to making dessert from scratch. You’ll need only a handful of ingredients, 5 or so minutes of easy prep work and 45 min in the oven. It’s wheat, grain, gluten, dairy and refined sugar-free, but you’d never know it! 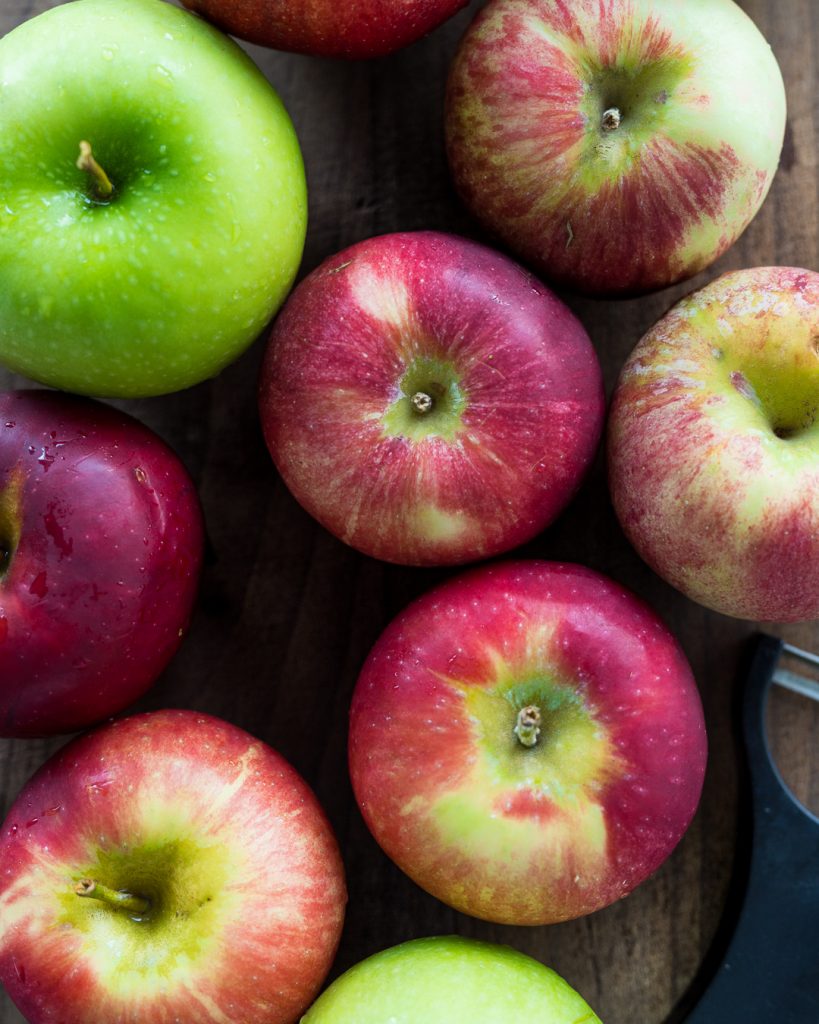 This Apple Crumble recipe is an adaptation of Donna Hay’s classic version. As someone who can’t bake to save their soul, I truly love the simplicity of Donna Hay’s Classic Apple Crumble. With only a few modifications to the ingredients and measurements, I was able to pull off a very delicious and seasonal dessert (it’s Fall and Ontario is overrun with delicious apples!).

In the place of wheat flour, I used Cassava Flour. I imagine the first question people will have is, “can I use almond or coconut flour?” To which I would answer, I’m sure you could but, personally, I’m not a fan of the texture.

In the place of caster sugar, I used Maple Syrup because Canada, and because delicious! I imagine the second question people will have is, “can I use coconut sugar, agave or honey?” To which I would answer, yes! You’re the boss, applesauce! Though you may have to tinker with the volumes if switching from wet to dry.

In the place of rolled oats, I used chopped walnuts. I think you see where I’m headed here, so yes, you can use your favourite nut. Pecans or slivered almonds would be delicious as well!

I replaced the butter with ghee. I imagine coconut oil would work as well but it would likely impart some coconut flavour, which I know from many emails is not everyone’s favourite!

Lastly, I think you could use just about any apple you like. The first time I tested this recipe, I used Granny Smith exclusively. The second time, I made it with an assortment of Granny Smith, Golden Delicious and Macintosh, because that’s what I had on hand. I have to admit that I preferred the tartness of the Granny Smiths against the sweetness of the crumble. But both were very delicious! 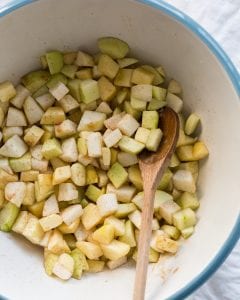 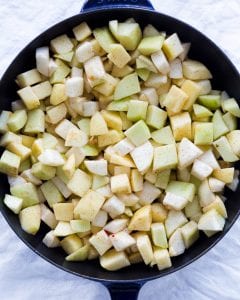 One of the things I love about making this Paleo Apple Crumble is just how forgiving it is. In terms of the recipe, precise measurements are not as critical to a crumble as, say, pastry. Likewise, you can be as ‘rustic’ with the presentation as you like. Have fun and get the kids involved, I say!

Even if you do mess things up beyond repair, simply top the Paleo Apple Crumble with some scoops of your favourite dairy-free, vanilla ice cream (I like Coconut Bliss).

One thing I will confess to, is the confusion I have between crumbles, crisps and cobblers (not to mention Pandowdys, Bettys, Grunts and Slumps). After a deep dive into the dark web of baked desserts, I have emerged with only relative clarity. It seems they are all more or less the same but distinguished by their topping. 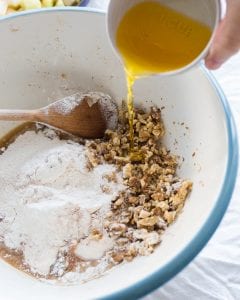 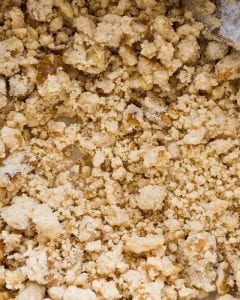 Cobblers have a dropped-biscuit or pie dough topping.

Crisps often contain a topping of sugar, butter, flour, nuts and oats. The oats are the ‘crisp’ part.

Crumbles, unlike crisps, rarely contain oats and instead rely on a streusel-like topping of butter, flour and sugar.

Since this Paleo Apple Crumble is oat-free, and indeed based on an authoritative crumble recipe, I feel fairly confident in titling it as such. Then again, what do I know? 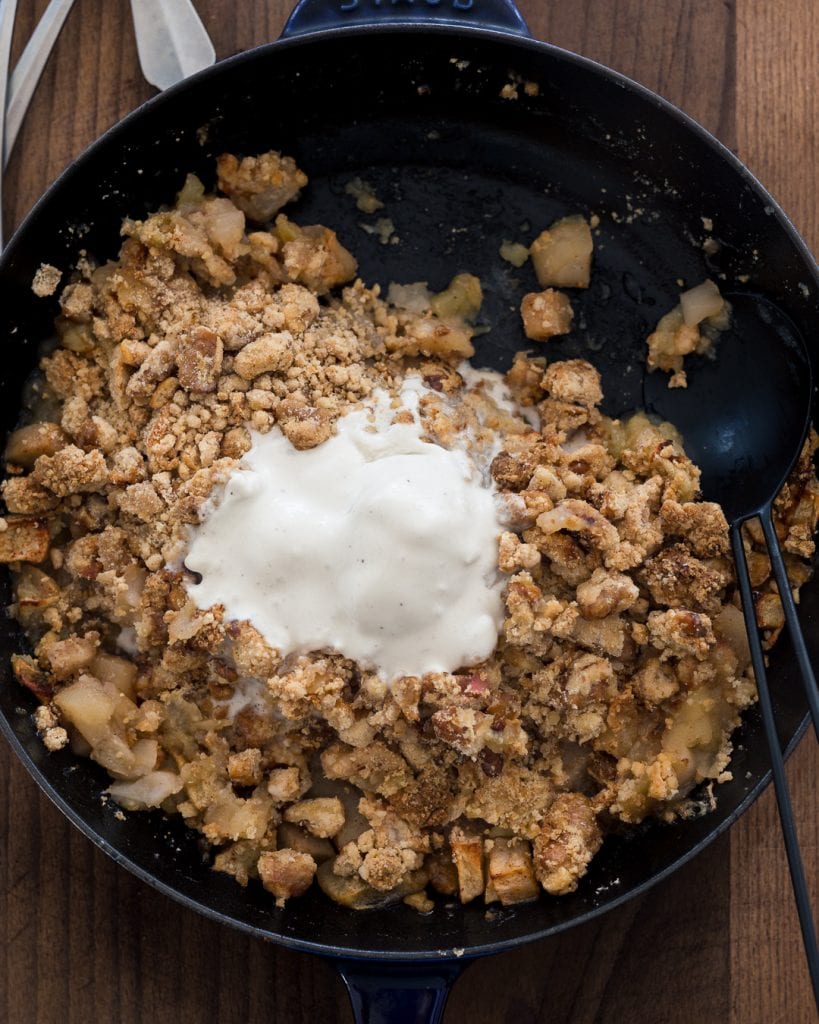 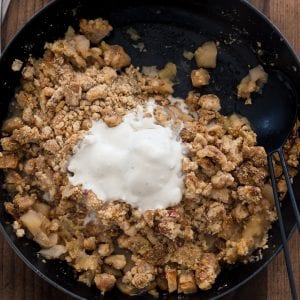 This Paleo Apple Crumble is as easy as it gets when it comes to making dessert from scratch. You'll need only a handful ingredients and 45 min in the oven!
Print Recipe Pin Recipe
Cook Time 45 mins
Course Dessert
Cuisine American
Servings 6 servings

for the Crumble Topping:

For the Crumble Topping:

I don’t have cassava flour on hand. Can anything else be substituted? Almond? Coconut? Thanks!

I suppose so but, as mentioned in the post, I’m not a fan of the gritty texture that results from using coconut and almond flour in this recipe.

Making this now! Can’t wait to taste it!

I don’t have cassava flour but thinking about using GF oat flour in place since above you don’t recommend coconut or almond flour.

Sure, that would work as well.

Made a smaller portion if the crumble in a castiron skillet, after having made the whole portion in a glass dish (soo good!). To my surprise, parts of the crumble and liquid turned dark (blueish-black), NOT burned. Any explanation? Thank you!

Hmmm… could be that the apples have oxidized? Very glad the flavours came out nicely though!

Can this be prepped ahead of time and then baked a few hours later? Thank you.

I suppose so. Just note that the apple can oxidize (turn brown) if it’s no longer in the lemon-water.