Cochinita Pibil, or Puerco Pibil, is a Yucatán-style, slow-roasted pork. Though recipes differ, it is commonly made by first marinating a whole suckling pig in a mixture of achiote (or annatto) seeds, cloves, all spice, oregano, sour orange, garlic, and other spices or herbs. The pig is then wrapped in banana leaves, placed into a pit lined with hot stones and slowly cooked for several hours until it is falling off the bone. 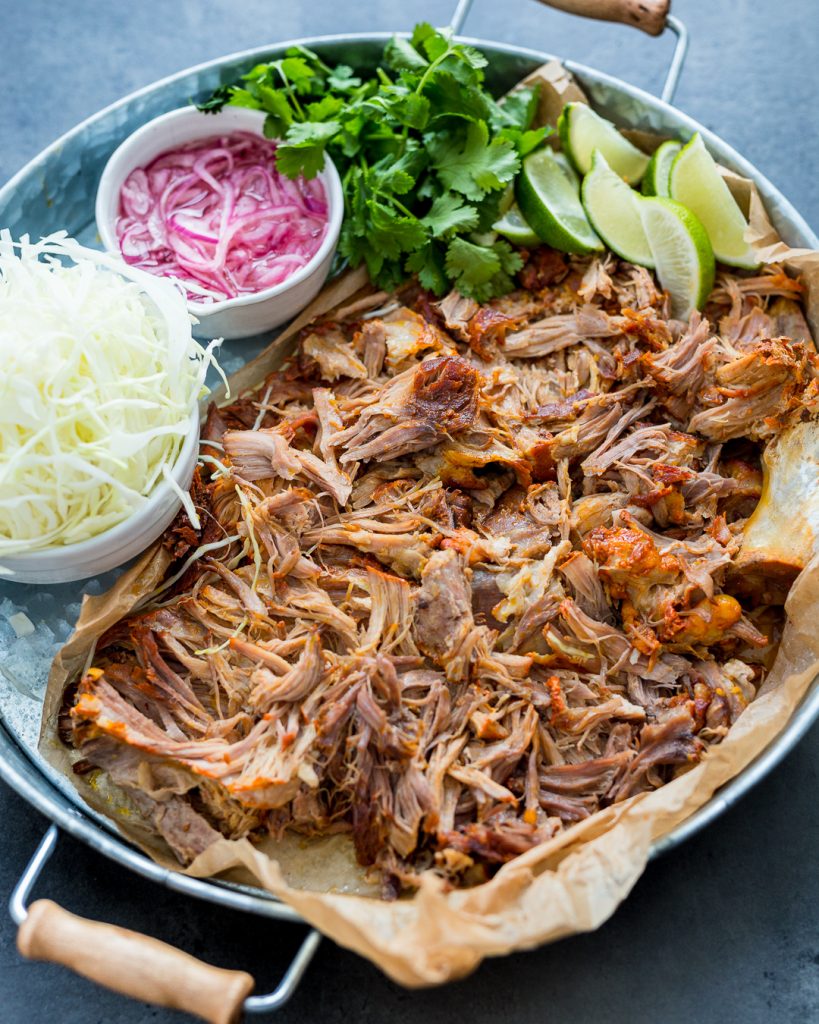 Believe me, there’s nothing I would love more than to follow the “traditional and authentic” route, build a pib (stone-lined pit), marinate an entire suckling pig, and slowly cook some cochinita pibil as the sun sets over Toronto. Alas, apartment living just doesn’t allow for such luxuries. Nor do city bylaws that likely prohibit digging pits in public parks for the purposes of slow-roasting suckling pigs (I think?).

Luckily, there are some workarounds to the pit-digging and whole-hog requirements. 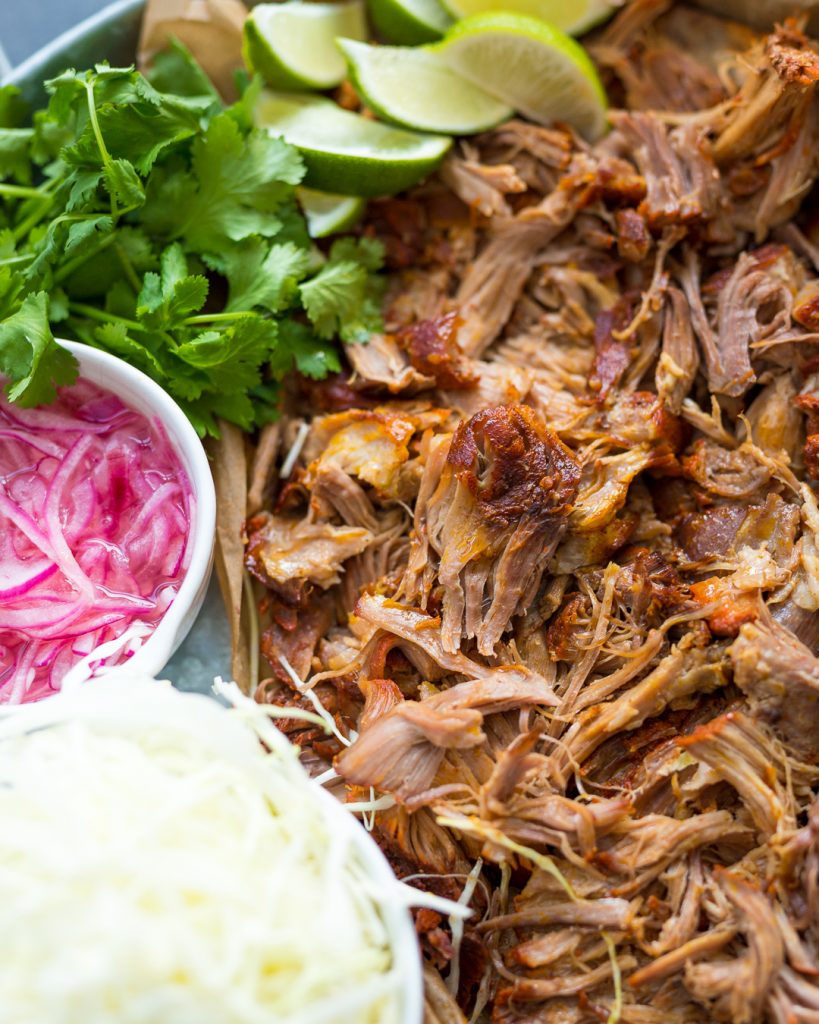 How to Cook Cochinita Pibil at Home

Aside from ingredients, which we’ll get to in a second, the biggest impact on the taste of your cochinita pibil is the method you use to cook it. Dry heat, smoke and steam will each bring something different to the table, pun intended. And, yes, I know! None of these can truly be called cochinita pibil because they aren’t cooked in a pib. But let’s just go with it. 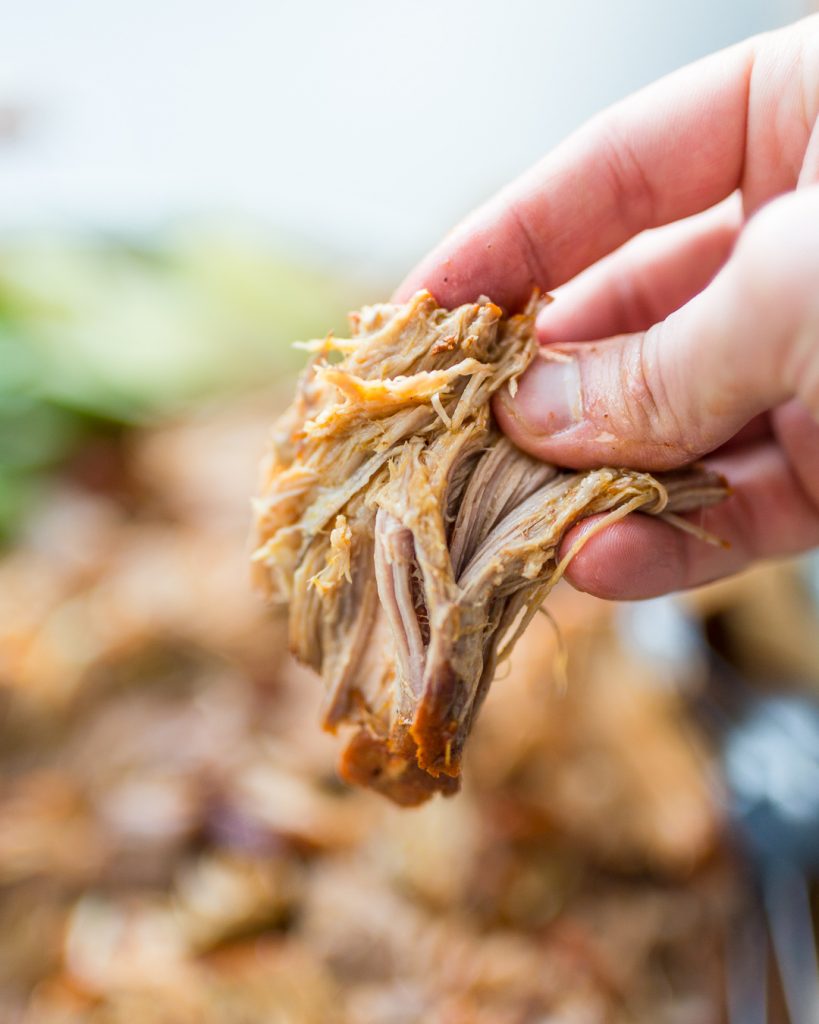 The path of least resistance is undoubtedly the slow cooker. It’s as easy as placing the marinated meat in the vessel, turning it on and walking away. You can start it before going to bed at night or before leaving to work in the morning. Either way, you’ll return to a perfectly cooked, incredibly soft and juicy cochinita pibil.

Depending on the thickness of your pork shoulder, it will take you at least 4 hours on high heat or between 7-8 hours on low heat if cooking a bone-in piece of meat. If cooking boneless, you can probably shave one hour off of the low-heat cooking time.

Personally, if using the slow cooker, I omit the banana leaves altogether (as shown in the pictures). I know, cardinal sin! But the flavour is just too intense and overpowers everything else. But, hey, you’re the boss, applesauce. 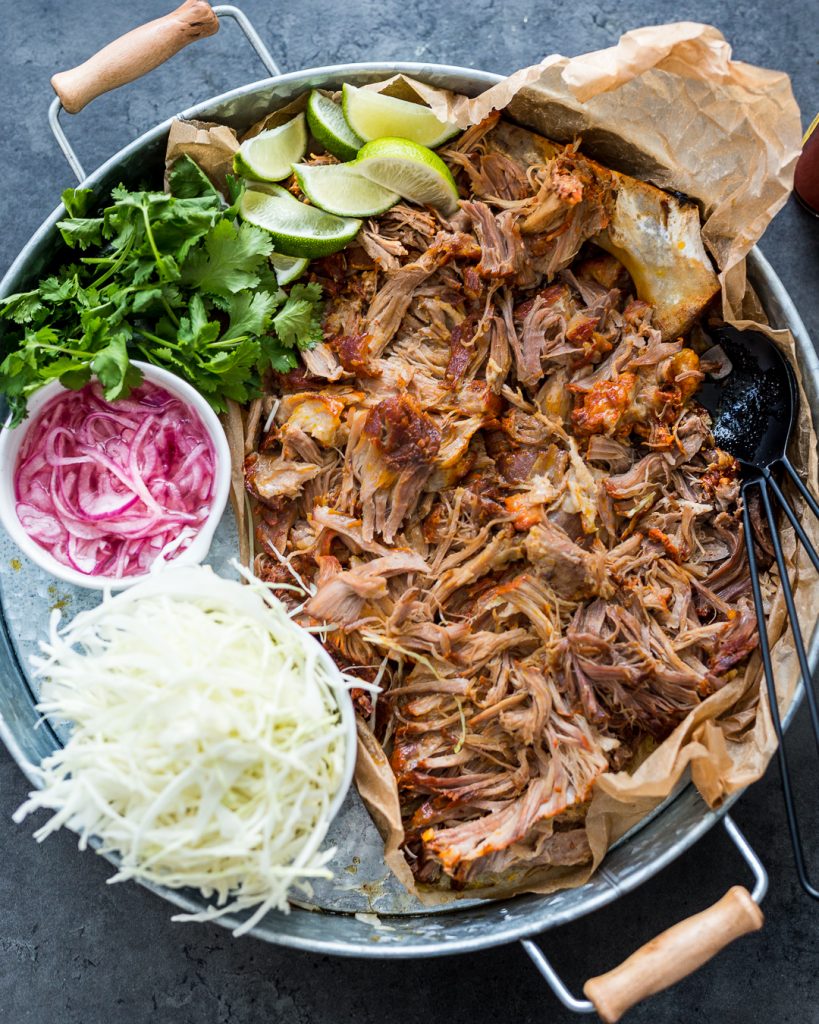 Though roasting in the oven is as easy as using a slow cooker, it means that you can’t leave the house just in case something goes awry.

Similar to the slow cooker, you can roast the cochinita pibil low-and-slow for around 4 hours or lower-and-slower for 7-8 hours. The choice is yours.

One of the benefits of the oven is that the dry heat changes the flavour of the banana leaves while trapping any of the steam inside, keeping the pork super juicy and moist. 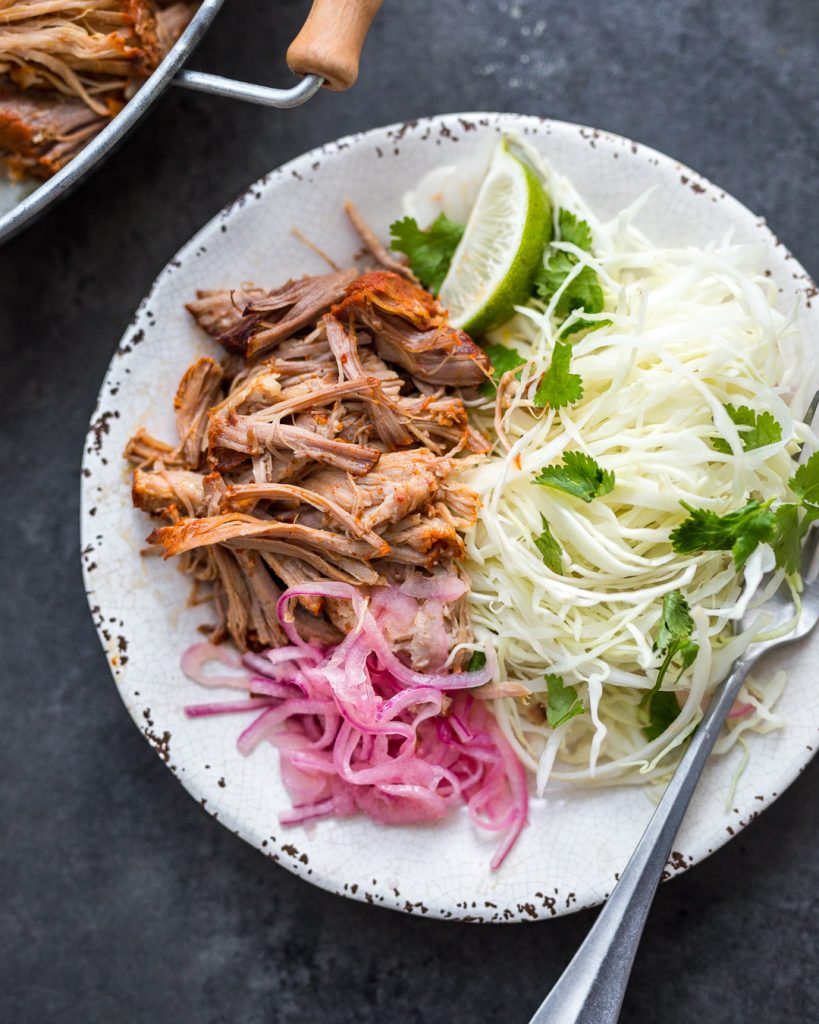 Smoking the pork is the method that likely yields the most flavourful results. You get all the benefits from the dry heat of the oven while imparting smokey flavour that mimics the pib.

If you have a Traeger, it’s as easy as using your slow cooker. Simply adjust the temperature setting and go do something else while your pork cooks. 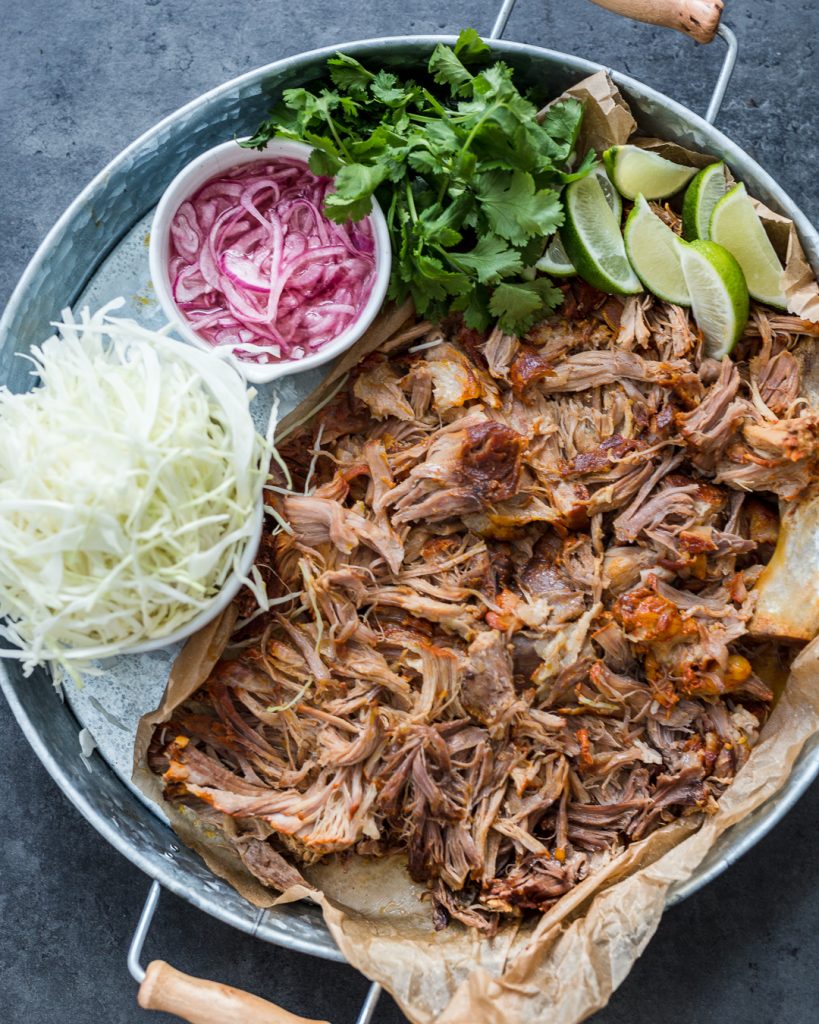 The marinade for the pork differs slightly depending on the family recipe. However, there are a few usual suspects that show up in every cochinita pibil. 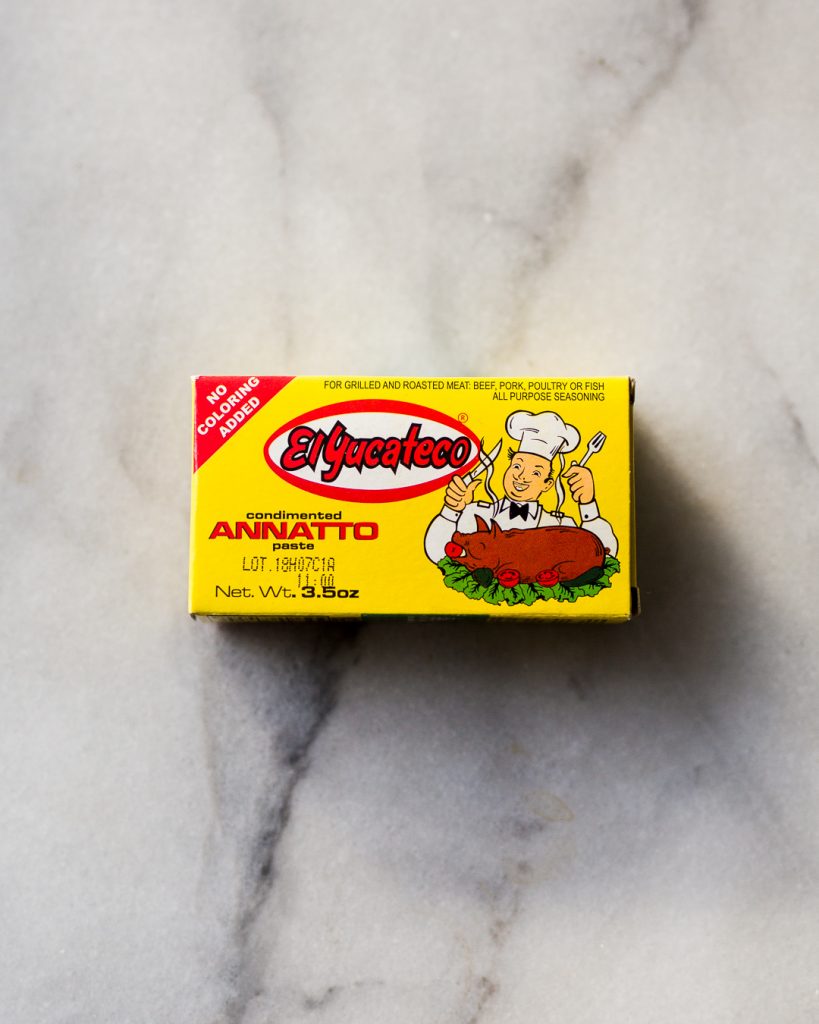 Achiote or Annato Paste or Seeds

Achiote, also called Annato, are the seeds of the Bixa orellana shrub. It can be used as a spice, food colourant or textile dye. When used in larger quantities the flavour is earthy, peppery and slightly bitter.

You can buy the seeds raw and whole or in the form of a paste made with other spices and herbs. I recommend buying the paste simply for sake of convenience and flavour, even though it will likely contain a small amount of corn flour.

If buying raw, you will need to bloom the seeds in some fat before soaking in liquid. You will also need to source the other spices required for the marinade, which isn’t difficult. 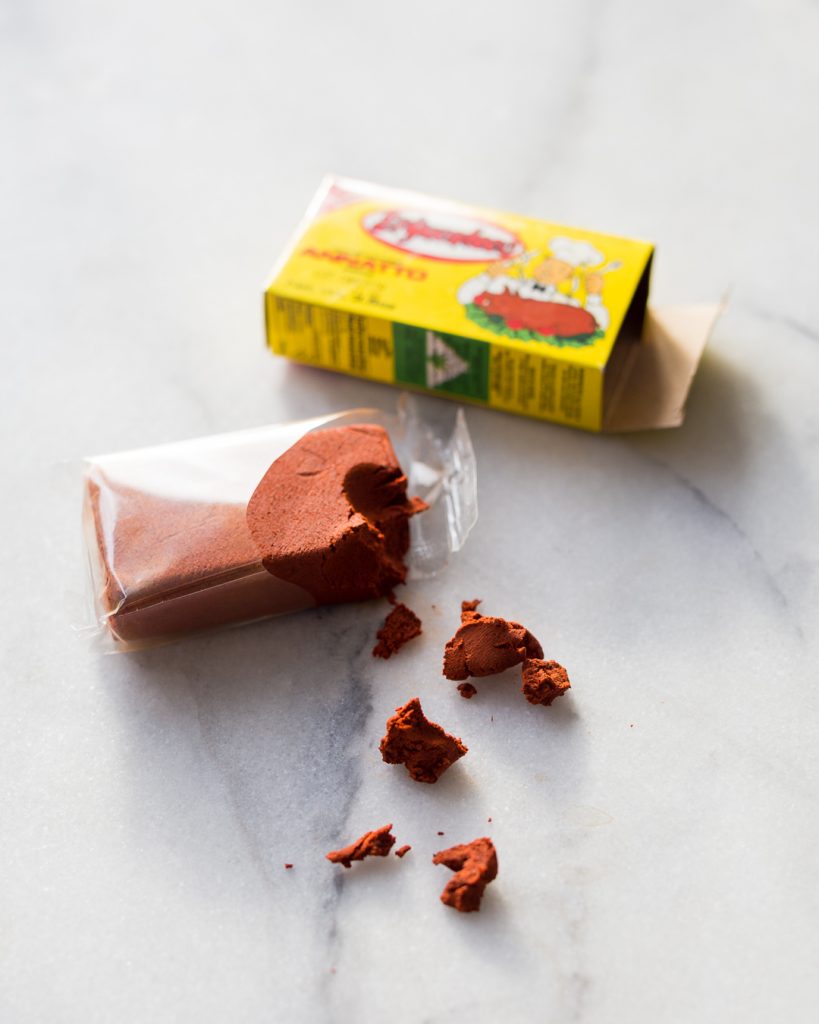 One thing that is very important to note if making Cochinita Pibil is that most achiote pastes are already prepared with other spices and herbs that you will need in your recipe. For example, the very popular El Yucateco brand contains achiote, all spice, clove, garlic, oregano, and salt.

The flavours in this paste are quite potent so you don’t really need to add any additional spices to your marinade.

You can likely find the achiote paste at a local Latin grocer or online here. If in Toronto, check out Latin World, La Perola or Market-tino.

Sour orange is commonly used as a marinade for meats. Unfortunately, I’ve never found sour orange in Toronto but a great workaround is to mix orange juice and lime juice together.

This will give an amazing tangy flavour to the cochinita pibil! 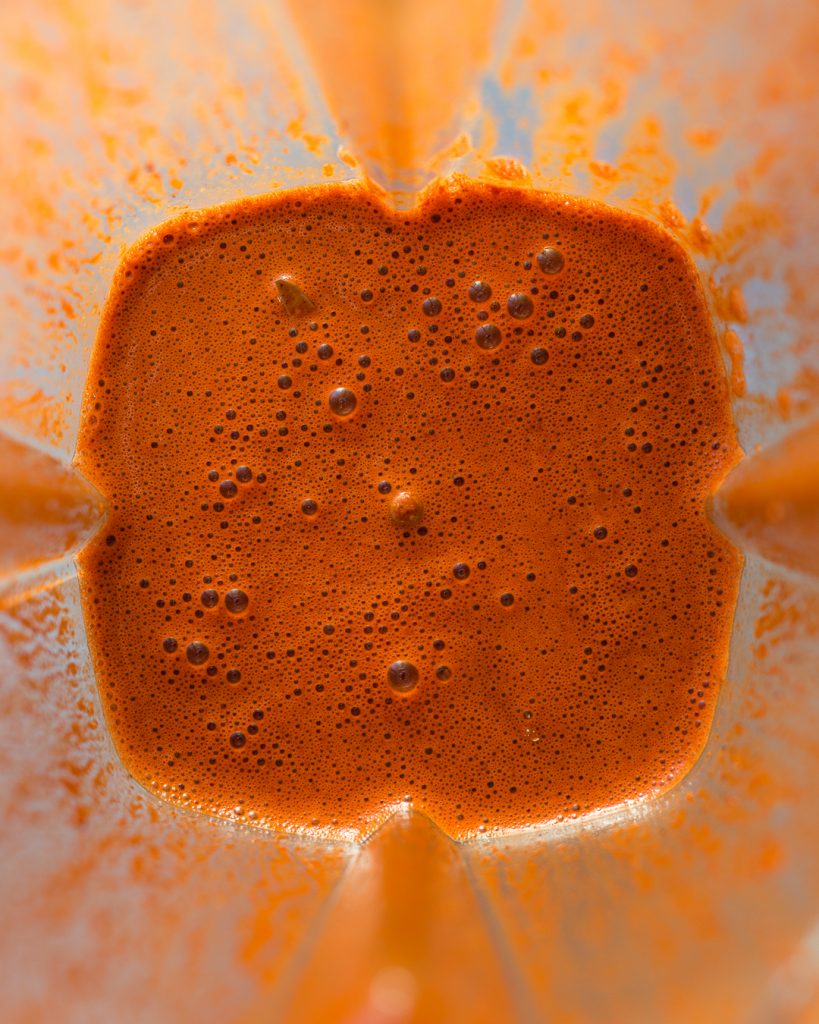 As mentioned, each recipe differs in terms of the types of herbs, spices and flavourings used but from what I gather the usual suspects are clove, all spice, and oregano.

Since the El Yucateco achiote paste has most of these ingredients built in, I don’t use anything else. Trust me, this stuff is a powerhouse of flavour and a little goes a long way. 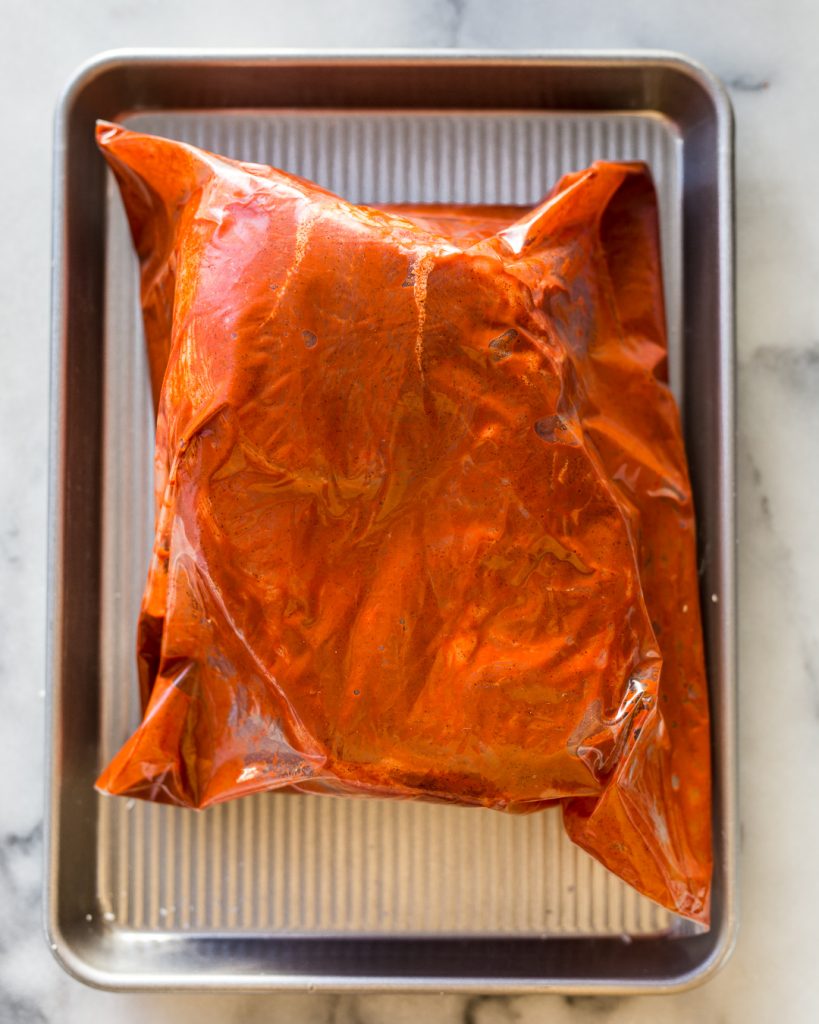 Banana leaves are traditionally used to wrap the pork before being placed in the pib. Not only do the leaves trap any steam and help prevent the pork from drying out, but they also impart a significant amount of flavour.

As mentioned, steaming the leaves themselves amplifies this intense flavour and aroma, which may or may not be desired. So, if you plan on using the slow cooker, which is the recipe I provide below, maybe omit them altogether or use one or two leaves total.

If, however, roasting or smoking, you will definitely want to use the banana leaves so as to trap any steam trying to escape.

The downside is that the banana leaves can be a bit difficult to find. Your best bet is to try the frozen section of a Latin or Asian market.

How to Serve Slow-Cooker Cochinita Pibil

Tacos are the obvious choice here. However, if you find yourself fresh out of tortillas (cassava, corn, flour, or lettuce-wrapped), I recommend serving the cochinita pibil with some thinly shaved, white cabbage. It makes for a crisp, crunchy, filling side dish that doubles as a salad. Trust me, it works. 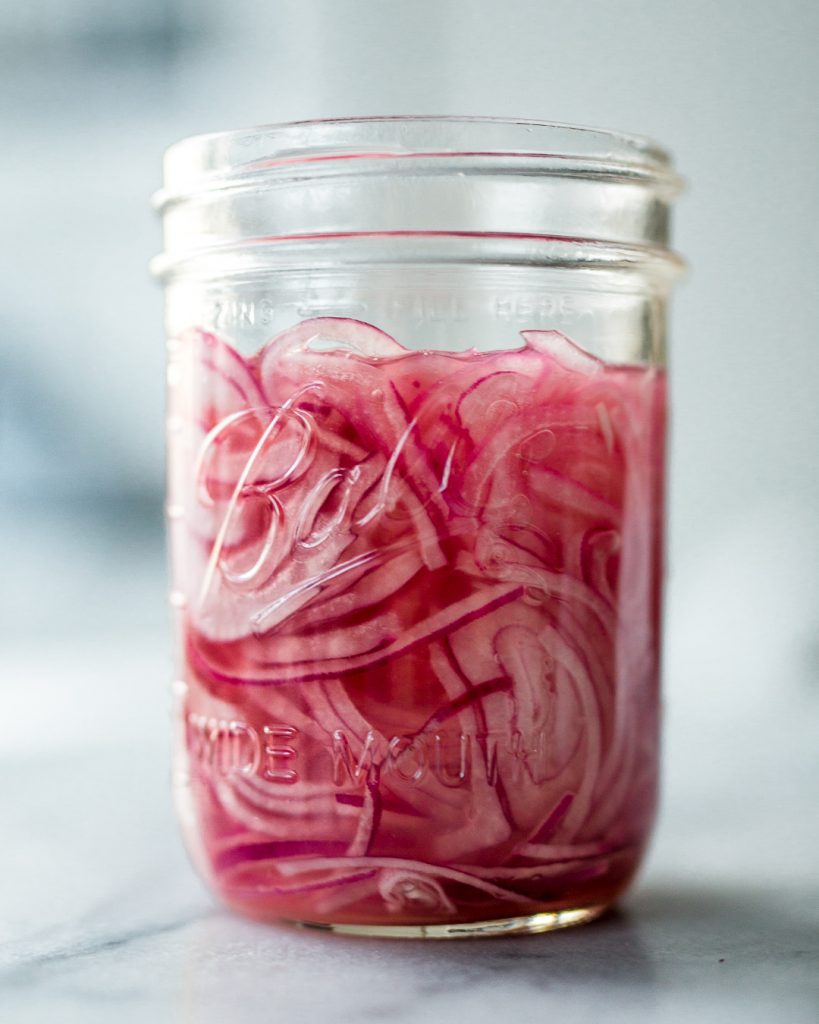 As for toppings, the classic paring are pickled red onions. These gorgeous ribbons of pickled goodness not only brighten up the pork colour-wise, but the acid also cuts through the rich, fatty meat. 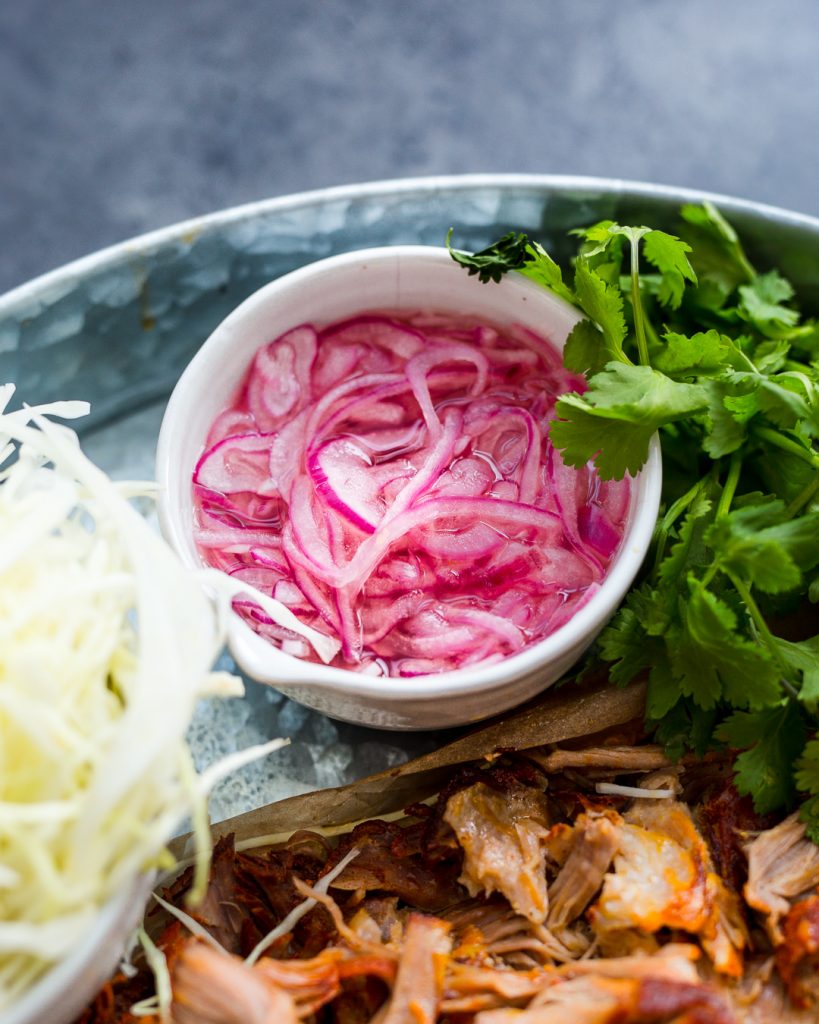 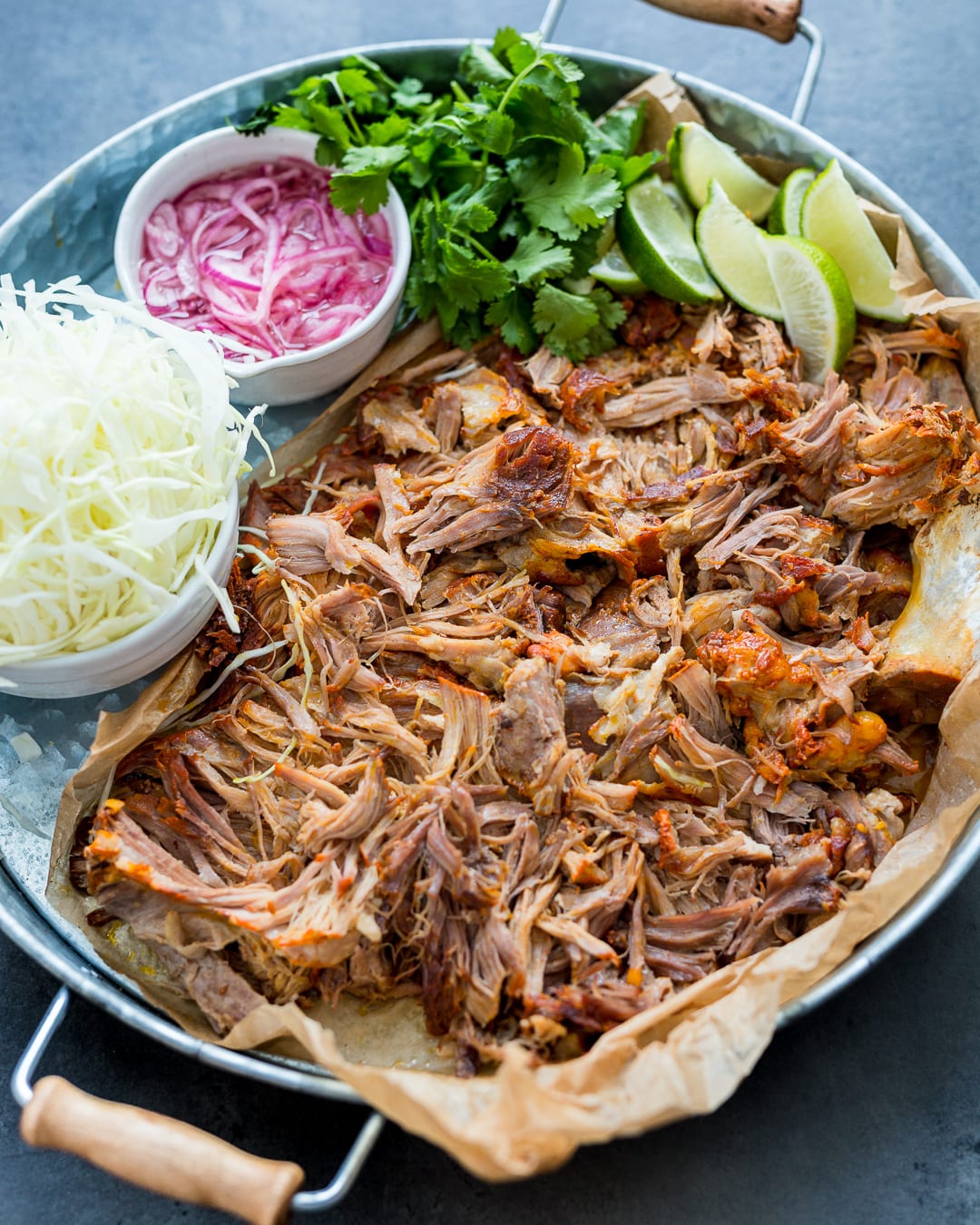 Would this recipe work with an instant pot?

I haven’t tried it in the IP yet so I can’t vouch for flavour. If using banana leaves, I personally would not use the IP because the steam will intensify the flavour.

Looks fantastic, only question would be how much in 1/4 cup of a anchiote paste in grams? I can’t seen to find a consistent conversion

Hard to say because the paste is very dense so it will need to be weighed. I’m all out of the paste at the moment but if I get some soon I will weigh and update the recipe.

This could not be easier or better. Delicious! Thanks for making one of my favorite Mexican meals super easy. Onions are fantastic too. Learned a trick from Rick Bayless to rinse raw, cut onions to cut some of the harshness. Then pickled. Mmm.
I’ll check out your other recipes!

So happy to hear you enjoyed!

Wow! What an amazing compliment! Thank you!