If you didn’t know any better, you’d never guess this Bacon, Leek and Asparagus Quiche with Sweet Potato Hash-brown Crust was gluten-free, grain-free and dairy-free. It’s perfect for a Mother’s Day brunch or Easter lunch.

This Bacon, Leek and Asparagus Quiche also happens to be Whole30 and Paleo-friendly. You can definitely make it a bit more indulgent by adding some gruyere, emental, swiss or meunster cheese. It can also be slightly modified to be vegetarian by omitting the bacon.

What you Need for this Bacon, Leek and Asparagus Quiche with Sweet Potato Crust

Bacon: To keep things Whole30 and Paleo-friendly, use a sugar-free bacon. Other types of cured or smoked ham would also work. But, again, make sure it’s sugar-free if you are following Whole30 or Paleo.

Slice the bacon into lardons (French term for thinly sliced bacon) before cooking. This will help the bacon to cook more evenly and render more fat.

Another tip to help render as much fat from the bacon as possible, is to try adding it to a cold pan to start. This will also help prevent the bacon from scorching.

Leeks: One of my absolute favourite vegetables! Leeks are an allium (same family as onion, garlic, scallion, shallot, and chive), and add a delicious sweetness to the quiche when sautéed. Just be sure to wash them thoroughly before cooking.

I find it easiest to trim the green tops, which are tough and fibrous, and then slice the leek down the middle but keeping the stem fully intact. This helps keep the leek from falling apart while you rinse it very well under cold water to remove any dirt trapped between the layers. At this point, it can be thinly sliced.

Asparagus: Undoubtedly the star of the show! Although asparagus is available year-round in most North American grocery stores, it’s best in the springtime when it’s naturally in-season. If you can, try to find some at a local farmer’s market (if it’s open).

The lower, thicker parts of the asparagus spears are quite fibrous, chewy and unpleasant to eat. You have a few options when it comes to trimming them. You can gently bend them near the bottom stems until they naturally break apart. Or, you can trim them with a knife. Although these are probably the easiest and fastest methods, they can result in quite a bit of waste.

Instead, try trimming only the very bottom of the spears and then using a vegetable peeler to remove the outer, dark green layer of the spears. You’ll reveal the inner, white core that is soft, sweet and perfectly edible.

For maximum flavour and best texture, sautée the asparagus along with the leeks before adding it to the quiche. This will soften the spears a bit and allow you to season them to taste.

Sweet Potato: Traditional quiches are made with a pie crust. You can definitely use my Gluten-Free Pie Dough recipe for this recipe. If you’re doing a round of Whole30, however, it will be off limits.

For something different, try making Sweet Potato Hash-Brown Crust! It’s super easy and much easier and quicker than making a traditional pie crust.

Simply coarsely grate the sweet potatoes and toss them with olive oil and seasonings. Evenly press the mixture into an oven-safe, non-stick skillet to form the shape of the crust. Blind bake so that it holds its shape and gets crispy and then let it cool completely before adding in the quiche mixture.

If you don’t like sweet potatoes, you can substitute white potatoes here. It will still be Whole30-compliant, but it will technically not fall under Paleo guidelines.

Full-Fat Coconut Milk: To add richness and texture, but keep this Bacon, Leek and Asparagus Quiche dairy-free, I use full-fat coconut milk. Don’t worry, you won’t be able to taste the coconut! It does add a lot of texture to the eggs so unless you have a coconut allergy, try to use it.

Not all brands of coconut milk are created equally or taste great! I personally only like two: Aroy D and Savoy Coconut Cream. Both taste great and are made with nothing more than coconut and water. 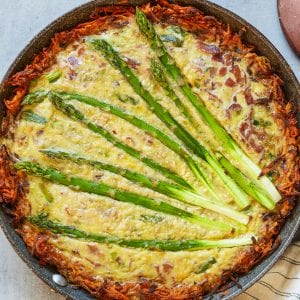