I wont’ lie, the coffee enthusiast in me really wants to bash these Dairy-Free Vanilla Latte Macchiatos. The fact is, they’re really delicious. So much so that I find myself craving them every now and then.

You see, personally, I drink my coffee black. No exceptions.

My wife, Catalina, on the other hand claims that she CANNOT drink coffee unless it has some sort of milk in there. Up until two years ago, she was pouring about a gallon of dairy in her coffee per week.

It took me the better part of about 4 years to wean her off of dairy and get her onto dairy-free options such as different types of nut milks (almond, cashew, coconut, etc). Believe me, it was a hard-fought battle but in the end she came around to see the harmful side effects dairy was having on her body.

Things like headaches, inflammation, constantly getting sick and taking weeks to recover from a common cold, were all minimized after she quit dairy. This, of course, came in tandem with a more thoughtful approach to food in general and cutting back on sugar, wheat, legumes, and alcohol. 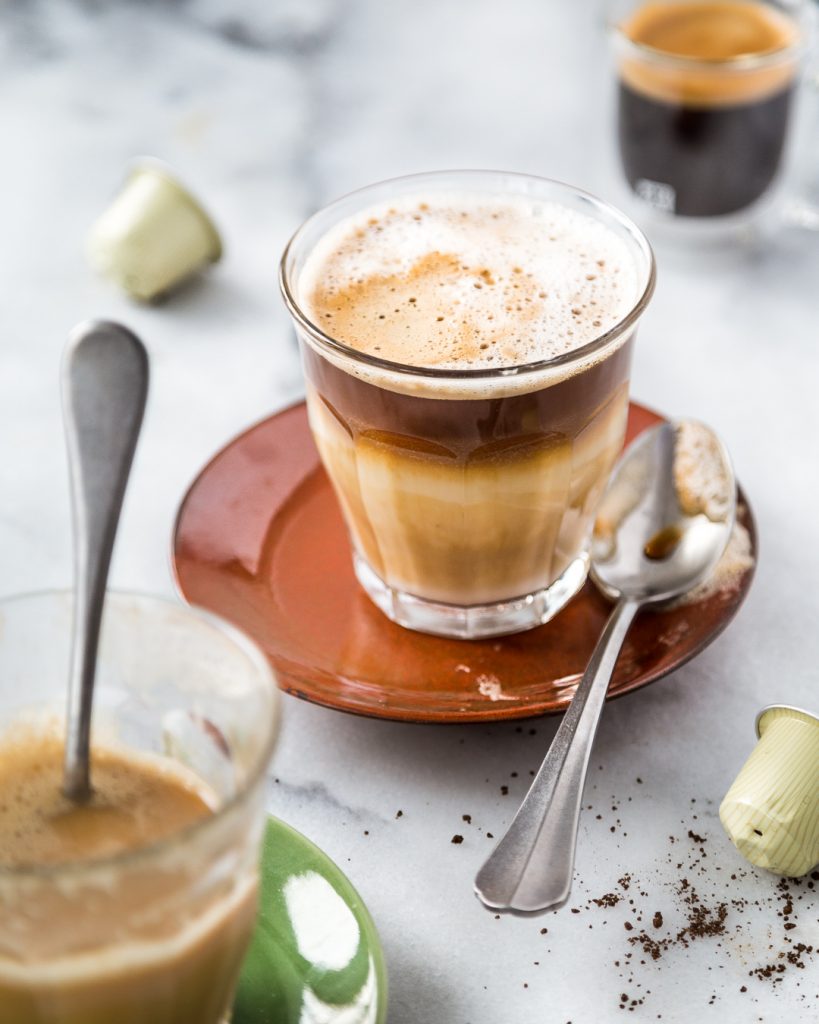 Her go-to cup of morning brew these days is much different than it used to be because of the new addition to our family. While Catalina was pregnant with Sofia she cut back from about 3 very large cups of coffee a day to only one and it was about a half-cup at that. The rest of the cup was, of course, filled with almond milk.

I’ve been whipping up this dairy-free latte macchiato for her on the weekends as a special treat and somewhere along the way I found myself enjoying one or two as well.

It’s a really simple beverage that doesn’t necessarily require any fancy equipment. Of course, it is made much easier with an espresso machine and milk frother.

What Makes this a Dairy-Free Vanilla Latte Macchiato?

First and foremost, the exclusion of dairy and the inclusion of vanilla.

I have had my Nespresso Pixie for years and it’s still a very much beloved piece of kit. It doesn’t take up much counter space at all, pumps out a decent espresso, is easy to maintain and requires very little cleanup. The pods are fully recyclable and Nespresso has simplified the process by issuing pre-posted bags that you can simply drop in the mailbox with all your used pods. It’s a closed-loop, eco-friendly system. I know, sounds like an advertisement but I assure you, it isn’t.

If you don’t have an espresso machine of any kind, you can make a cup of stovetop espresso using a Bialetti Moka. Of course, you could also just make a regular cup of coffee if that’s all you have.

As for the milk frothing, this dairy-free vanilla latte macchiato tastes best when you “steam” the “milk”. Come to think of it, I’m not sure it can technically be called a latte or macchiato unless the milk is steamed.

I own the original Nespresso Aerrocino, which is a fine device and works wonders. The newer version is essentially the same but with a design revamp. My milk frother is currently on loan with my parents for the time being so I had to devise a different method for steaming the milk (in this case almond milk).

To do so, I simply heat the almond milk in a small sauce pan over medium-low heat until it starts to steam. Then I use a bamboo whisk to continuously whisk the milk until it develops a layer of froth on the surface.

Another trick is to steam the milk in a sauce pan, transfer it to a clean French press and agitate the milk with the plunger until it froths. This will introduce much more air into the milk than a whisk alone. 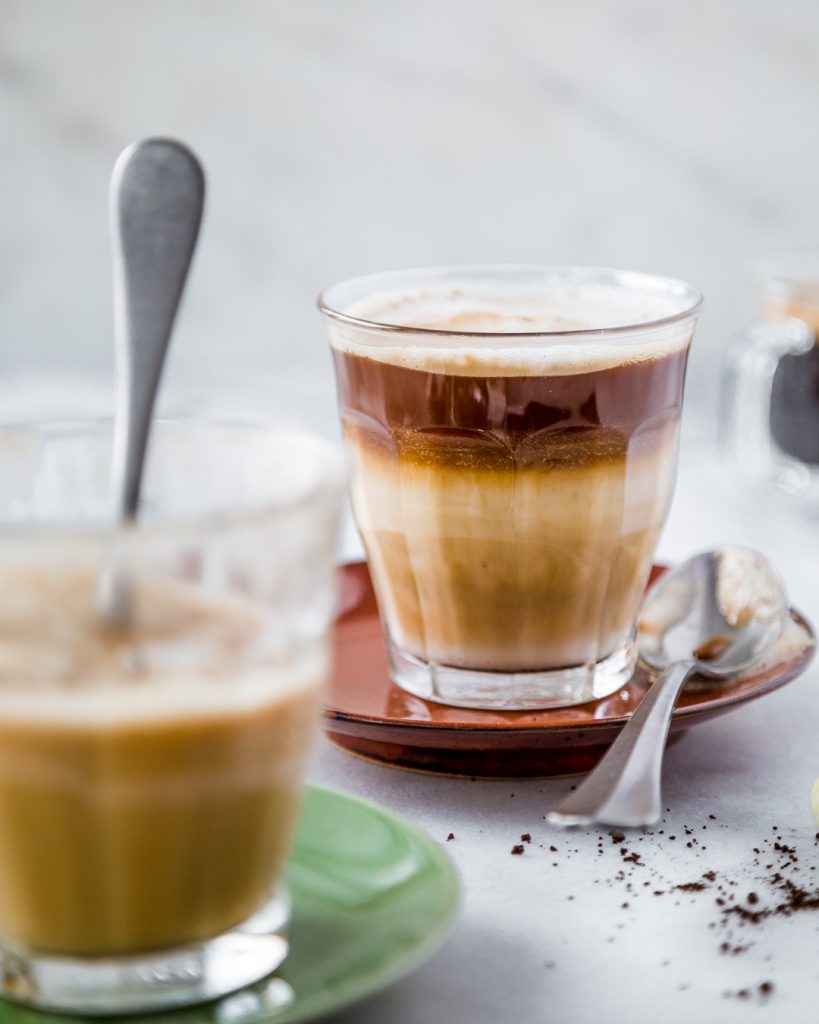 The vanilla flavour in the latte macchiato is introduced first and foremost by the dried vanilla beans I use. These were sent to me from Bulletproof a while ago. It seems they’ve discontinued the product, which is a shame because it’s a great pantry addition. The second layer of vanilla comes from the vanilla-flavoured Nespresso pods.

You don’t have to sweeten this beverage if you don’t want to. That choice is obviously yours to make. However, if you do want to sweeten it I find that a touch of agave syrup works wonders. I add it directly to the saucepan along with the milk as it heats up. That way it easily dissolves into the drink.

If agave is unavailable, you can use honey or maple syrup. All options are delicious and will impart different flavours. I find agave to be more neutral, which is nice because it doesn’t overpower the vanilla flavours. 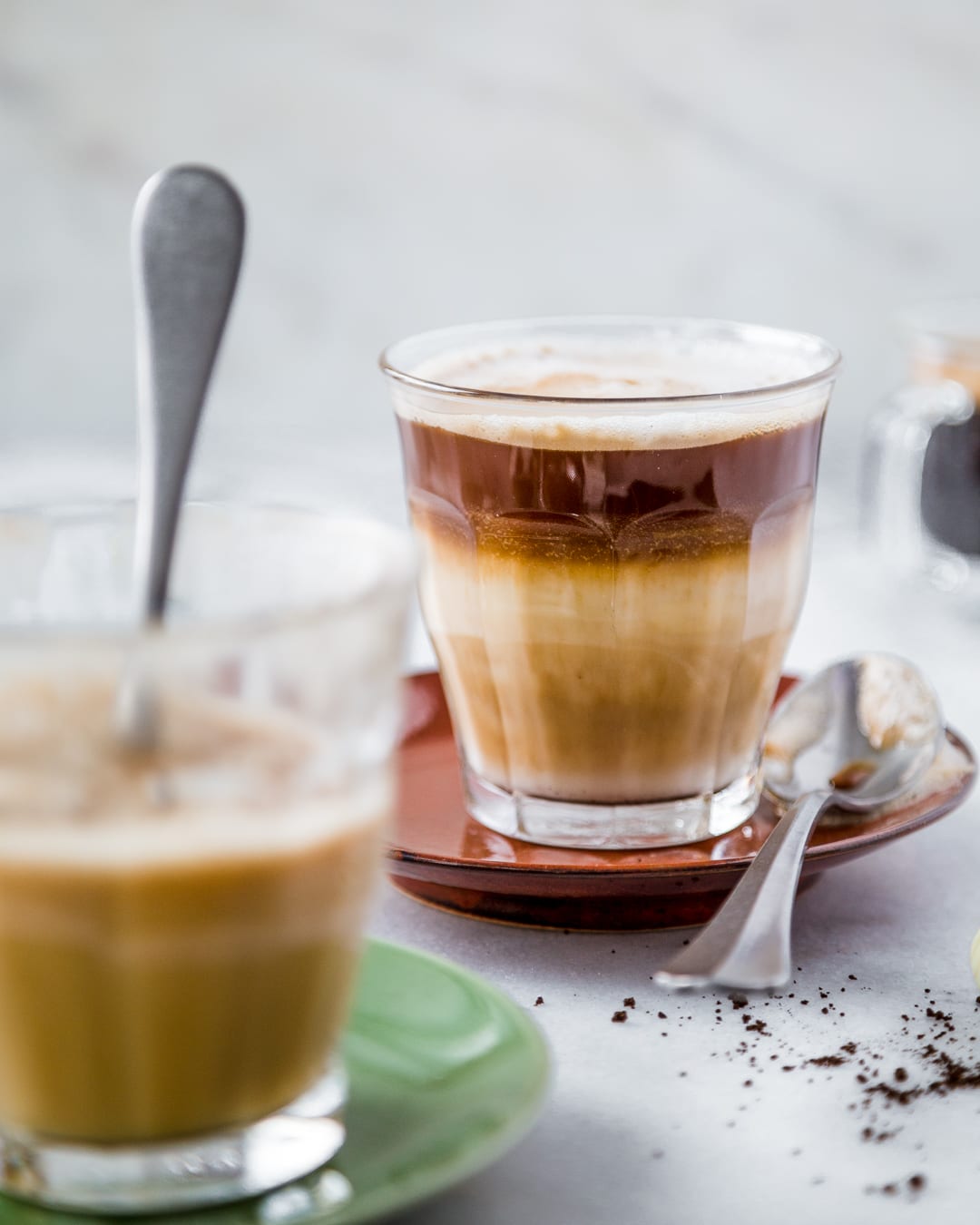 These Dairy-Free Vanilla Latte Macchiatos are easy to make and delicious. Even the coffee snob in me enjoys them, albeit reluctantly.
Print Recipe Pin Recipe
Cook Time 5 mins
Course coffee, drink
Servings 2 cups

I love vanilla. But I never try this vanilla latte macchiato before. But This look yummy and looks easy to make. It will be a ideal drink for the evening. I will try it out.